Shortly after her father's death, Victoria prepares for another bad, sleepless night on the TARDIS. Things end up not as badly as she was expecting. Takes place between The Evil of the Daleks and The Tomb of the Cybermen.

Not my characters. This story is for entertainment purposes only. No copyright infringement is intended. Note: I had a splitting headache while I was writing this so it may not be up to par with some of my other stories, but I think I like the way it turned out. I haven't seen many stories addressing how Victoria tried to heal after the death of her father, and I loved her interaction with Jamie so I really wanted to write this. I hope you like. 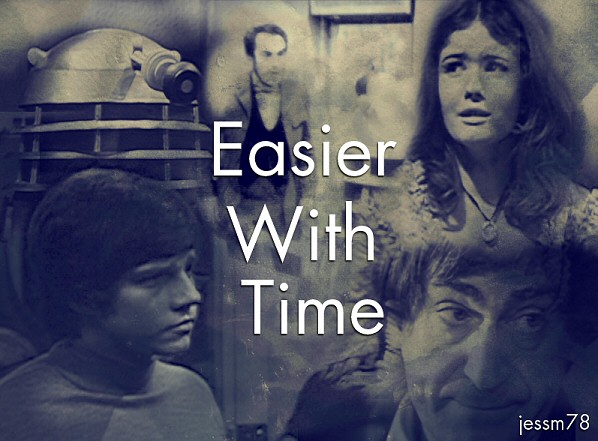 “Please, you must. Victoria.”

“Don't worry about Victoria. We'll look after her.”

She hadn't actually been there to witness it. She'd only learned about it second-hand, from the Doctor.

But in the mere days since it had happened, her brain had stitched together all the missing pieces and created an ugly, nightmarish-looking rag doll.

She heard his blood-curdling scream as the Daleks shot him. She saw the look of horror on his face quickly replaced by one of excruciating pain.

And it happened, over and over again. Night after night. Victoria couldn't remember the last time she'd actually slept. Although it couldn't have been much longer than a week, it felt like an eternity. She could feel it taking its toll on her. The Doctor had kindly given her a tour of his strange ship, this 'TARDIS', but she hadn't paid much attention. When she wasn't suffering from the nightmares, she felt ashamed she hadn't been more receptive towards him and Jamie. After all, they were only trying to help. The trauma, however, had eclipsed everything.

Tonight was no different. Lying in her bed in the darkened room, she tried hard to fill her mind with pleasant thoughts but they were not enough to prevent the nightmares from overtaking her once again. Images of lovely plants and gardens borne out of the book she'd borrowed from the TARDIS library had suddenly changed into those monstrous metal things and their loud, metallic voices ...

Her father suddenly appeared in front of them. She wished more than anything she could jump into the scene and save him. It was not to be, though. It was never to be.

Again she witnessed the hideous nightmare playing out. The Daleks shooting her father. His look of complete shock and then pain. His torturous scream. His lifeless body crumpled on the ground.

“NO!!” she shouted. Suddenly awakening, her head shot up. She was back in her bed on the Doctor's ship. The reality did little to assuage her pain, however. Even in the dark she was convinced those hideous Daleks were lurking in the shadows.

Picking up on a sudden movement off to the right some distance away, she felt her heart race. She wanted to ask 'Who's there?' but the fear overwhelmed her so greatly and left her with an inability to speak. She merely sat up, shaking violently.

She tried again but was cut off when the shadow moved and suddenly grabbed her. Finally finding her voice, she screamed. She tried to punch and kick, but the thing held her tightly. Finally landing a good kick, she breathed a rare sigh of relief as she heard the figure utter a sound of surprise.

Victoria's mouth dropped open and she felt a rush of heat in her cheeks. “Jamie??” she breathed. Getting up, she quickly turned and groped in the dark for the candlestick on the end table. Jamie reached up to switch an overhead light on, saving her the trouble.

She gaped at Jamie, standing in front of her and rubbing his thigh. His expression was a mixture of anguish and confusion, but also concern.

“Jamie, what are you doing here?” she finally asked.

“I heard ye screamin' an' I was worried,” he replied, a hint of sadness in his eyes as he looked her over.

“Oh.” She dropped her gaze to her hands, feeling her cheeks burn once again. “I'm sorry that I woke you,” she muttered weakly.

“'S'all right,” he returned. “Ye didnae wake me. I was up already tae fetch a glass of water.” He turned to acknowledge the glass he had dropped on the floor. She gazed apologetically at him but he held out a hand to stop her. “Wasnae really that thirsty anyway. Now, what's the matter? It sounded as if somethin' frightened ye.”

Victoria sighed, trying to figure out how she could put this into words. Would Jamie understand? It was a chance she had to take.

“I still see him, Jamie. I see my father and the look of horror on his face as those wretched Daleks kill him. I see it in my sleep. I hear his screams.” Her voice faltered as the tenuous hold on her composure began to slip.

The sympathetic expression on Jamie's face turned quizzical as he cocked his head to the side. “But we werenae there when he was killed. The Doctor only told us aboot it after we escaped.”

She nodded. “I know, but after having interacted with them as much as I had, my mind just … “ She trailed off and shook her head in frustration. “I don't know, it was as if my mind had pieced together what had happened. I don't know how close to reality it is, but it's real enough to me.” The tears which had filled her eyes began to spill down her cheeks. “Oh, Jamie,” she uttered, her voice swept away by her sobs.

She felt Jamie pull her into a hug and stroke the hair at the back of her head. “It's all right, Victoria,” he murmured softly. She stayed in his embrace for a good while, certainly long enough to see the horrific images which had just plagued her begin to fade.

Jamie stepped back a bit and gave her a reassuring smile. “I know how ye feel.” His smile then faded and his expression became somber. “I dinnae like tae speak of it much, but I'd watched my own father get killed.”

Victoria stopped crying and sniffled, gazing up at him sadly. “What?”

Jamie nodded, avoiding her gaze. “Aye. 'Twas before Culloden. There was a lot of fighting between different clans in the Highlands. I won't go into it, but he died in my arms.”

“Oh, Jamie, that must have been awful!” she exclaimed. “I'm so sorry.”

He shrugged as if it were something he'd come to terms with ages ago, but his smile was nonetheless grateful. “Thank ye, Victoria. It was jus' part of the Highland life. An' then during Culloden I watched Alexander get killed by a Redcoat. He was the son of the Laird McLaren. I was their piper an' they'd taken me in after my parents were gone. He was a good man. He treated me like a brother.”

“All the same, I'm sorry.” She gave him a sad smile and then sighed again in regret. “I only wish I were as strong as you.”

He uttered an odd chuckle, perhaps part incredulous and part self-deprecating. “Well, I willnae lie to ye. It wasnae easy for me at first. I had nightmares aboot my father's death for a wee while. I'm no' sure how, but they eventually went away. I suppose the Laird an' his family treated me so well, it sort of took away the pain. No' that I no longer miss him, ye know. I still do. But it's got easier with time.”

Victoria nodded and as she gazed at him, she realized she had a new-found appreciation for Jamie. “I suppose it will get easier for me, then? With time?”

Jamie gave her a fond smile. “I'm sure it will, Victoria. I know ye have no' been with the Doctor an' me very long, but I hope we can help. Anytime ye need us, we're both here for ye.”

For what seemed like the first time in ages, she felt a broad smile threaten to crack her face in half. Her eyes began to fill with tears again as she hugged him. “I already feel blessed to have you both,” she said, her voice muffled by his shoulder.

She felt Jamie rubbing her back in slow, circular motions and she relaxed into his embrace. She wasn't sure how long they'd stayed like this, but she really needed it. She finally loosened her grip on him and stood back.

That kind, gentle smile was back as he led her over to the bed. “Now, how aboot tryin' tae get a wee bit of sleep, eh?”

Nodding, she laid down once again and smiled up at him. She watched as he returned her smile, reached up to switch off the light, and then seemed to be making his way towards the door. As he moved away, she looked around uncertainly at the dark shadows. Suddenly the muted images of her father's death and the mechanical beasts which killed him began to grow clearer.

“Is there anything ye need?” Jamie suddenly asked, turning back to her. It was almost as if he'd sensed her distress.

“Er, yes, there is,” she replied shakily. “Jamie, I'd rather not be alone tonight. Please, don't leave.” She was nearly embarrassed at how weak and frightened she sounded, but the thought of her nightmares returning was not one she was willing to entertain.

In the dark she could make out Jamie's slightly surprised expression, but he nonetheless returned to her side of the bed.

“Aye.” He looked down at the bed and she thought she saw a bit of unease in his face. “Do ye want me tae ...” he trailed off awkwardly.

After a moment, Jamie finally climbed next to her onto the bed, propping his head up on several extra throw pillows. Finally having got himself comfortable, she watched as he turned to her. “I assure ye, Victoria Waterfield, I willnae do anything dishonorable.”

His remark failed to keep her from giggling. “I don't expect you to, Jamie.”

She barely caught his nod as he moved closer to her, holding her in his arms. Victoria's smile came easy as she relaxed into Jamie's comforting touch. She could feel the tension and fear slipping away at last.

“Jamie?” she suddenly asked, her voice piercing the quiet darkness.

“Of course.” She felt him plant a small kiss on the top of her head. “Good night, Victoria.”

“Good night, Jamie,” she replied with a sigh. Tentatively closing her eyes, she found any signs of those terrifying images had all but evaporated. In their place were scenes of herself in the garden, followed by those of when she first met Jamie and then the Doctor. She concentrated on their faces and her impression of their personalities.

It wasn't long before the sound of Jamie's slow, steady heartbeat against her lulled her into a peaceful, long overdue sleep.