Somewhere Among the Stars

In the aftermath of the Reaper War, the Normandy and her crew find themselves stranded on an uncharted world, uncertain about the fate of the rest of the galaxy they've left behind… including Shepard. For Liara T'Soni, leaving Petra Shepard behind means being burdened with a grief she thought she'd never have to endure again, when the future is so full of unknowns and the only comfort she can find, for now, is in the memories of her bondmate. 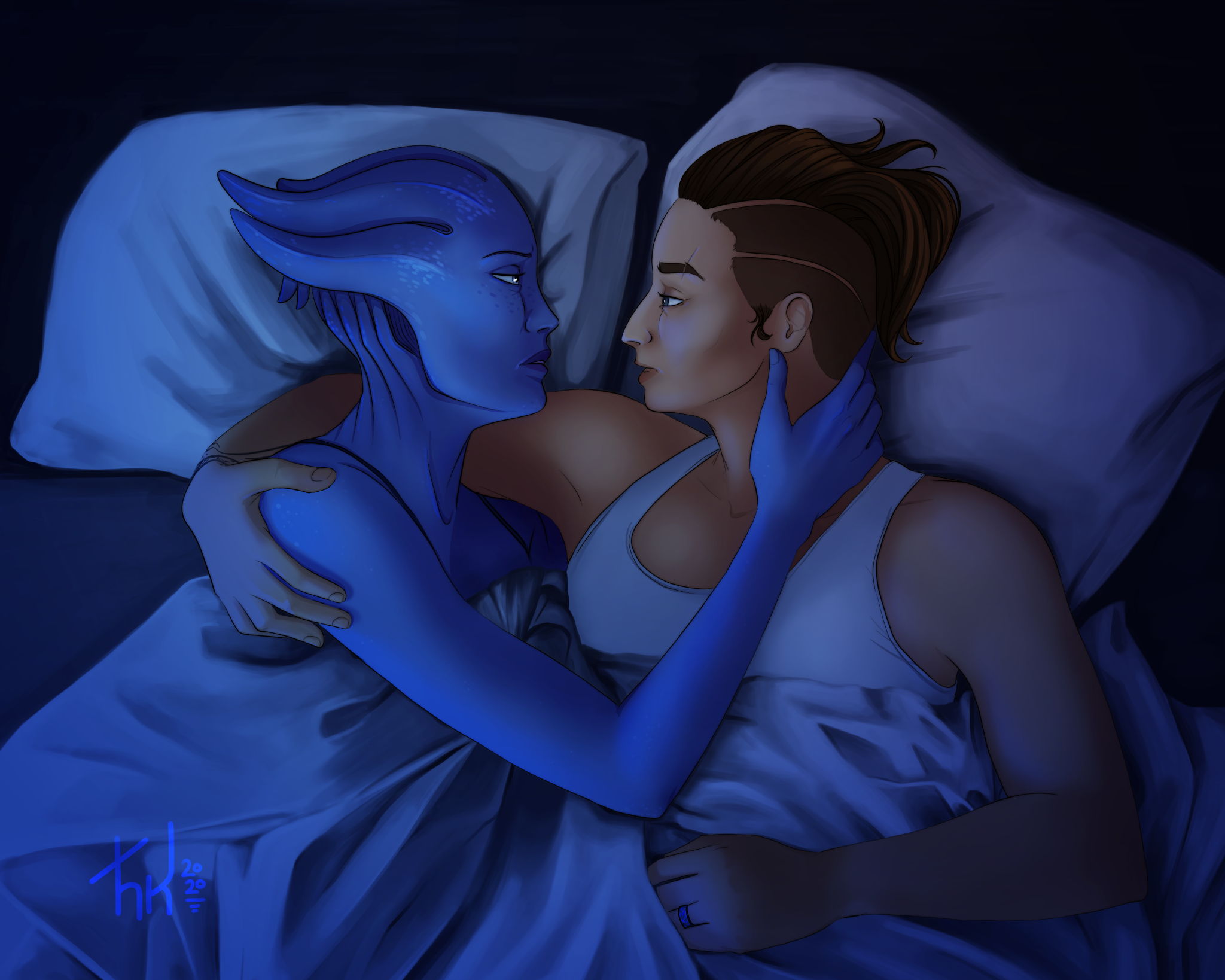 Hello, and thanks for stopping by!

Before we begin, I'll mention that this is, in fact, my first attempt at fanfiction, undertaken as someone who is decidedly not an avid reader of fanworks. Suffice it to say I never anticipated writing my own, but here we are. Both Liara and P-Shep — but especially P-Shep — grew inordinately dear to me, incredibly quickly, and I just couldn't rest until I told their story.

Now, the unfortunate reality: I've gotta get some fairly heavy, loaded, verbose disclaimers out of the way, because I'd rather be upfront and transparent than waste anyone's time.

First, let's be real: SAtS is a hard sell. Most people come to AO3 for it's-0300-and-I'm-horizontal-in-bed-with-my-phone-on-portrait-lock-looking-for-some-mindless-comfort-reading-type stories. I'm not trying to gatekeep or establish a literary-entertainment value-hierarchy, but if you've stumbled here by chance I have to be honest: if you approach SAtS as mindless 0300 reading while you're half asleep and perpendicular to Earth's gravity you're gonna have a bad time. It's just not that kind of story. You get out of it what you put in: this is a high-effort, high-reward work. But I think it's plenty accessible as long as you approach it with patience and a willingness to be challenged and uncomfortable at times. I don't pull my punches and am incapable of writing anything that isn't painfully authentic.

Now, since that's out of the way, I've gotta say the other thing. It really shouldn't be controversial, and it's something I found glaringly obvious when I played the games, but apparently not everyone picks up on it:

What we see in canon is enough to conclude that Shepard and Liara's ME1-era relationship is, at best, unhealthy, and this has profound effects on Liara's later development in the trilogy.

SAtS/LWLS is, concisely put, a deep-dive into Liara's trauma and a thorough setup for what is, in the game, shoddily executed "character development" after ME1. I realize many people love the updated version of her character (and, disclaimer, this is fine; it's fine to enjoy media uncritically; you don't have to analyze everything you consume; I tend to follow everything to its logical terminus; "think deeply of simple things" and all that jazz), but objectively speaking her writing is messy. It's not technically "character development" if it (1) doesn't happen on-screen and (2) isn't explained. Whereas some love the sudden glow-up and newfound badassery, I see two different characters: Liara is unrecognizable in ME2. The game never addresses how or why she changes; we, as fans, are left to infer.

To me, Liara's self-destructive hunt for Shepard's body and the Shadow Broker is evidence of madness, not maturity or agency. But what conditions led to her psychological downfall?

SAtS is my answer.

One of the reasons I love this relationship is that it's real and heart-rending and gritty if you read between the lines. Emotional abuse is uncomfortable to address in a story that's already so gut-wrenchingly sad, but it didn't sit right with me to leave it out: the breadcrumbs are there in canon.

Most of all, though… I wanted this story to have heart. It's been a labor of love (and blood/sweat/tears — yikes, the fluids), so if this work resonates with you (or you just really love wacky prose), don't hesitate to let me know. I promise that I don't bite despite my intensity and pedantry, and I'd love to hear your thoughts.

tl;dr: SAtS/LWLS is not a novelization; I don't rehash canon. More literary than most would expect from a fanfic. (I trust that my readers are smart, can identify unreliable narration, understand that portrayal != endorsement, yadda yadda yadda; the comments section is a goldmine for analysis.) Tackles challenging topics that may be upsetting: CW for suicide attempts, pregnancy/miscarriage, unhealthy relationship dynamics, severe mental health issues — not an exhaustive list, so Reader Discretion Advised and all that. (Gonna toss in a cheeky warning for SNOOTitude as well.)

Special thanks and shout-out to my betas, ferociousqueak (AO3 | Tumblr) and DollyLlama (read Dolly's Catastrophe Theory; it's lit), for kindly reading over my work and providing invaluable feedback. I would not have had the courage to post this story without you!

The hatch sealed with a thunk behind her, the clang of armor-clad knees against metal floor panels reverberating over the sound of her increasingly ragged breathing. Collapsed and trembling, gloved hands streaking indigo blood on the floor, she attempted to quiet her shaking breaths, tried to blink back the tears welling in her eyes, but between her physical injuries and a gnawing anxiety in her chest, all she could manage was a whimper.

Whatever happens… you mean everything to me, Liara. You always will.

Echoes of the moment they'd shared before parting — the way Shepard's voice had broken with those last words, her gloved fingertips brushing across the same spot on Liara's cheek now damp with tears — replayed with such lucidity she swore her nerves fired in response.

New tears stung as they streaked over lacerated cheeks, dripping down with each convulsive sob and dotting the floor with wet stains — some clear, others mixed with blood. She had not been gentle in sending Garrus away after he'd escorted her to her quarters, adamant in her refusal of medical attention as he implored her to reconsider. Her physical injuries were the least of her worries.

The room lurched and shuddered around her despite Normandy's inertia dampening, and a wince turned to an outward cry — if not from the pain of sudden movement, then from being startled back into her own reality. The rumble of the drive core, the groan of the bulkheads, the rattling of her monitor array, the flicker of the lights — all served as reminders of where she was, but more so of where she was not.

She should be there with her.

Liara slumped, overcome with a fit of sobs. She cut her wailing short. Hardened. Clenched her fists, then unclenched them.

She was strong. She had done what she could. And there was nothing more she could do that would make a difference. Nothing left to do but survive.

Shepard would activate the Crucible, or she would not.

The ship lurched again, sending a stack of datapads crashing off her desk and throwing her off-balance. Liara gasped for air through choked silent sobs, barely managing to steady herself, pressing her palms into the floor.

She should be there. With her. In success or in failure.

If the worst happened, was knowing any less painful than uncertainty?

Liara braced herself against the nearest server under her desk, attempting to stand, and she winced as her body protested the movement. Slowly she brought herself to her feet then limped the few remaining steps to the seat in front of her terminal.

Her fingers hovered over the keys, tremulous, hesitating. She typed her query. A distraction. Unnecessary. Shipboard visuals, aft and port. Two clusters of monitors nearest her brightened in dizzying flashes of blue, of red, of black with streaks of stars arcing with Normandy's maneuvers — too overwhelming. She killed the process and the monitors went dark.

She pressed her eyes shut and typed again. All updates concerning Shepard, from official and unofficial channels. She executed the command. The nearest monitor flashed to life, bright against her eyelids. She looked down at her hands, couldn't bring herself to look up. Another query. All updates from Alliance Command, set to another monitor. Her body shook with each heartbeat. Could she handle the news if it wasn't good?

Did it matter? Shepard would do what she could. Liara's role in the fight was over.

Nothing left to do but survive.

Transcripts appeared in real time on her monitors, their ribbons of text blurred by the tears in her eyes. She blinked them away.

Blinked again. Then again. She drew in a shaking breath.

Shepard was on the Citadel. Alive.

Liara's heartrate surged along with a new flood of tears, and she sank down with her face upon her desk, soaked through with overwhelming relief and fear and anticipation. Yearning. Hoping. A kiss on the back of her neck. A cozy cabin in the mountains. Little blue children. A family. A future.

The room around her jerked again, vibration rumbling throughout the ship and sending shocks of pain through her left leg. She whimpered through shuddering breaths and gritted her teeth.

Too soon to look forward. She wiped her eyes and returned to the info-feeds. Shepard's status: unchanged. Official commands: also unchanged. Normandy circled the Crucible in a series of haphazard evasive loops, defending the galaxy's last stand against the Reapers (though she preferred to do without the visual) among many other vessels tasked with the same — still waiting on Shepard's move.

Body humming with pain, Liara considered administering a medi-gel dose but thought better of it — there were others in greater need. She fought to relax the tightness in her chest and focused on settling and deepening her breathing as the minutes stretched painfully on. No new information.

And then it happened.

With movement on the right-hand monitor she instinctively rose, eyes snapping back into focus.

Crucible has fired. All ships retreat. Fall back.

Her chair crashed to the floor behind her as she shot to her feet, her left leg collapsing. She screamed and crumpled forward onto her desk.

Liara regained her balance, brought up her omni-tool, fumbled with the controls. Her arms trembled. It didn't matter. No message she could send to Joker or to Kaidan would matter. They had their orders.

They have to save her!

The familiar rising hum of the drive core signaled the imminent jump into FTL.

Between gasping, crying breaths she heard her voice — strained, croaking, panicking, hardly recognizable as her own. "No, no, no…"

The last of the data flashed on her screens as a sudden momentary bout of vertigo overtook her: Earth, Shepard, everything that mattered to her plummeting away as her eyes scanned the text.

But for her, only questions.

What just happened on the Citadel? Did the Crucible backfire? Had their efforts succeeded? Was Shepard alive?

The world fell away from her, her throat tight and burning, her face locked in a scream but no sound escaping. It was over.

Shepard had done what she could to ensure the galaxy a future, to ensure her a future, but how could she go on if she had no one to thank, no one to hold but a ghost built of their memories?

How could she go on without her strength?

The memories would have to be enough.