Moserah “Moze” Andreyevna is the adopted daughter of Marcus “Iron Bear” Kincaid, an illegal arms dealer using his collection of casinos to launder money from the sale of guns on the black market. Amara is a Private Investigator hired by Lilith to look into the disappearance of her husband Roland who was working as Marcus’ bodyguard the night he went missing.

Notes about FL4K: For the purposes of this fic they are human, however I have retained their NB status and use they/them pronouns.

Also I’ve been working on this idea for WEEKS. Seriously I have at least 5 chapters planned out yeesh.

Marcus “Iron Bear” Kincaid, the well-known casino proprietor and entrepreneur, died early last Tuesday morning. According to authorities, Kincaid was discovered face down in the living room of his Spring Valley home somewhere between the hours of three and five AM. Emergency personnel were called to the scene, however Kincaid was unresponsive and announced dead shortly thereafter. An autopsy report released by the County Coroner’s Office listed a stroke as the official cause of death, ruling out foul play.

Kincaid is survived by his adopted daughter, Moserah Andreyevna. As the only known living relative, she will take on the responsibilities of the entrepreneurs multiple casinos and investment properties. Andreyevna has repeatedly refused to comment on her father’s death, issuing a statement requesting privacy during this difficult time. A private service has been scheduled, and is planned to take place within the following week. Andreyevna is expected to attend.

The official spokesperson for the Kincaid Estate has asked that all correspondence be directed to their Public Relations Department. Further updates will -

She’s had enough, and Amara tosses her phone onto the kitchen table. Just her luck; Kincaid dies three weeks after she’s hired to investigate a disappearance with direct ties to the dirtbag. Now she’s gotta figure out her next move. Briefly, she considers contacting Lilith to offer a resignation, but then thinks better of it. The article said something about a funeral service. It also said it wasn’t open to the public, but if she can get in…

Reaching for her phone, she sends a text to the one person who might be able to help. 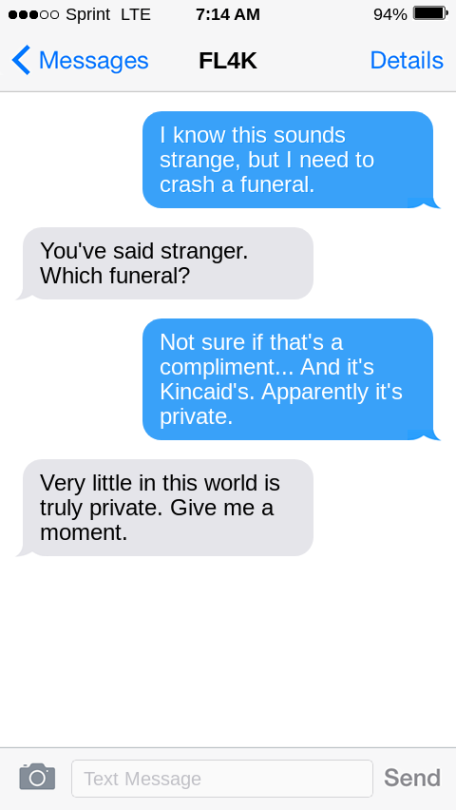 With FL4K, ‘a moment’ can mean ten minutes or ten hours, so rather than sit and wait she goes to pour herself another cup of coffee.

Though small, her kitchen is clean and orderly; a reflection of Amara’s fastidious nature. Early morning sunlight filters in through the window above the sink, paints the space in alternating shades of white and gold. Amara doesn’t bother with cream or sugar - she’s always preferred it black - and by the time she returns to the table, the notification light on her phone blinks an impatient blue. 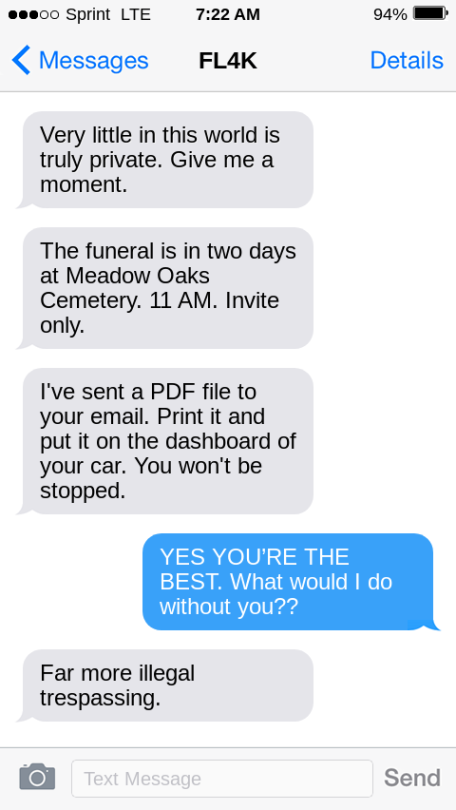 For the funeral, Amara opted to wear a modest, long-sleeved, dark dress to cover the intricate tattoos on her arms and shoulders. However, overnight, the weather took an unseasonably warm turn, meaning she’s now standing beside a collection of mourners with sweat sliding down her back. She wipes the moisture from beneath her sunglasses, and suddenly FL4K is in her earpiece, chastising in their monotone drawl.

“Stop that. It distorts the feed."

If she could, she’d tell them to hush, but uninterested in drawing unnecessary attention Amara holds her tongue.

To their credit, FL4K was right: she’d driven through the gate without so much as a second glance from security. While making her way with the other funeral goers, she was careful to appear as inconspicuous as possible. Not that she expected anyone to recognize her - Amara’s days of amateur celebrity status were long gone, along with her boxing career - but in these situations it was always best to go unnoticed.

Waiting is not something she does well, so to occupy herself Amara studies those around her. Three feet away is Rhys Strongfork, CEO of Atlas Resorts, and next to him Katagawa Jr. of Maliwan Luxury Casinos.The pair appear somber, however Amara is almost certain it’s an act fabricated for the benefit of potential onlookers. Marcus had many enemies disguised as friends, and as the owner of the highly successful chain of Pandora branded hotels and casinos, his list of rivals was lengthy.

“There is an impressive amount of high profile individuals at this funeral.” FL4K again. “Jack Handsome, Mr. Torgue, Moxxi Kincaid… This man had many powerful associates.”

Still unable to reply, Amara recalls her conversations with Lilith. The woman had issued several warnings, painting a portrait of Marcus that was very different from the highly polished image offered up by the media.

FL4K’s voice pulls Amara back to the present. “Here they come.”

Her head snaps up, and she can see an entourage approaching over the small, grassy rise. It’s lead by a priest, his robes billowing out around him as he walks against the wind. Further down the line are two men dressed in crisp, black blazers, coiled wires trailing from their ears, and following behind them Amara can see another man, this one taller with white hair. Between the three, they’re flanking someone much smaller, but it’s not until the party is standing beside the coffin that Amara finally gets a good look.

It’s a woman. She’s barely over five feet with short, choppy, chestnut hair and a button nose. High cheekbones frame her angular face, though large, dark sunglasses obscure the more delicate details. In contrast with the other women present, she dons a perfectly tailored black suit, the lines complimenting her slim build. To Amara, she looks the way good whiskey tastes: smokey, mysterious and expensive.

When the priest begins his sermon, FL4K fills in the necessary details. “Moserah Hayussinian Yan-lun al-Amir Andreyevna. Prefers the moniker Moze. Kincaid adopted her when she was very young for reasons that remain unclear. Country of birth is listed as the former USSR, but biological parents are unknown. Well educated; holds two business degrees, speaks four languages. And it says here she enjoys kickboxing, marksmanship, and demolition derby. Hm. Interesting choice of hobbies.”

Though it takes a considerable amount of will, Amara manages not to stare. Meanwhile, FL4K continues.

“The man to her right with the white hair and goatee is one Zane Flynt, of the illustrious Flynt Brothers. Freelance security specialist, bodyguard and rumored hitman, he is a recent hire. If I were to guess, he is here to protect Andreyevna. It is possible she feels her life is in danger following her father's sudden death.”

FL4K goes quiet, but the priest does not, and so Amara’s thoughts and eyes wander until both fall squarely on the woman across from her. Moserah - no. Moze. Something about her is fascinating, compelling. Maybe it’s the air of austerity that appears to stand in direct contradiction with -

Hang on, did she just smirk?

For a second time, the corner of Moze’s mouth quirks up ever so slightly, and now there’s no room for doubt. Amara can’t see it, but she can sense that Moze is looking right at her. Unwilling to blow her cover, Amara drops her eyes, maintains her solemn appearance. Could she get arrested for this? Surely, funeral crashing is no more than a misdemeanor, but considering whose funeral it is the consequences may be far more dire.

After a seemingly endless string of mumbled Latin, the priest finishes, and the coffin begins its slow descent. Moze waits until it’s seated in the earth, grabs a handful of dirt, sprinkles it into the open grave. Silently and without fanfare, she turns and leaves, the security detail following close behind.

Amara is patient, hangs back just long enough to get lost in the sea of bodies. Once the crowd begins to disperse, she makes a quick exit.

She’s in the car, fumbling for her phone when she remembers FL4K is still connected to her earpiece. “FL4K, tell me you caught that!”

“Indeed.” They sound strangely amused. “It appears Miss Andreyevna has taken notice of you.”

And unable to stop herself, Amara grins. “Good. I’m going to make sure it happens again.”