Under the Blind Moon

Julian's reaction to Garak's memoirs (ASIT). Delves deeply into Julian's psyche and re-examines their relationship. Leans heavily on the contents of Andrew Robinson's "A Stitch in Time".

After re-watching DS9 again, my eyes were opened to all the wonderful Garashir subtext (something I didn't quite catch in the late nineties, being too young) and I decided to do something about it.

In my desperation, I bought a copy of ASIT and wept my eyes out. So much of it reads like a love letter, at least to me! Reading Andy's and Sid's "The Nexus" only made it worse, and when I researched the book canon, I just shook my head. The official writers get guidelines they must respect, but as a fan, I am under no such constraints (mercifully).

There are 22 chapters currently written, and I expect this fic to grow into quite a monster.

I currently have no beta, so any mistakes are entirely my own.

So, without further ado, join me on this little journey into Julian Bashir's chaotic mind and I hope I hear from you... 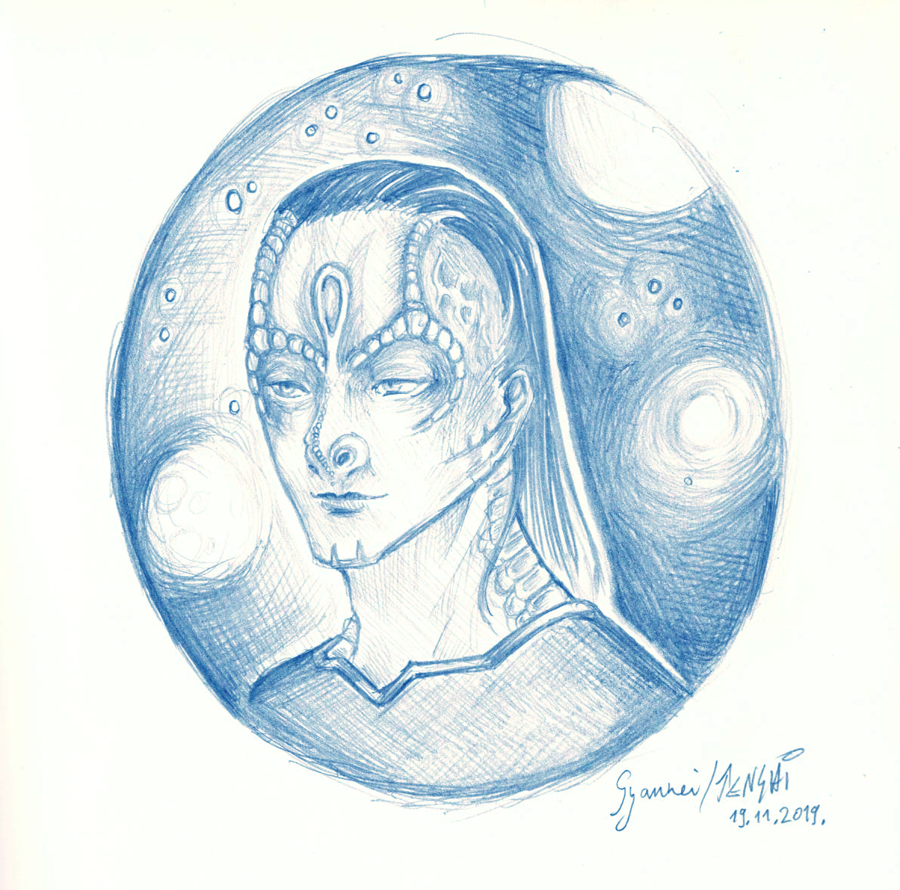 Julian didn't know what to think. When he’d sent out his communiqué, he’d assumed the reply would be written in Garak’s typical cordial manner, and the fact the Cardassian had called him out on it in his response sent a wave of shame through his thin frame.

“Greetings from Cardassia, wish you were here” indeed.

At this point, he wasn’t even surprised that Garak had known enough of him to read between the lines of his, in hindsight, overly simplistic message. Julian’s tone was unmistakably formal and polite, his communication worded as something he might’ve written to a distant friend (one who rarely stayed in touch) and intended solely as means of maintaining a sense of contact. No wonder his plain and simple tailor friend reacted poorly – the letter he had penned had been overly impersonal; the manner and format of the response he had gotten made him feel like a scolded child.

Garak had always been inordinately good at that. What used to fill him with feelings of foolishness and inadequacy, even though his old friend could always moderate his chiding with a tactful dose of stern yet affectionate reproach, now engulfed him with an oppressing weight of utter, humiliating shame.

What had he been thinking? Here he was, still on Deep Space 9, happily diverted by his relationship with Ezri, feeling more optimistic about his prospects and his future, and so damn certain of his reaffirmed place in the universe that he felt like extending a message to his absent not-quite-friend, almost as if no time had passed at all and they were back at the Replimat for one of their lunches; merrily discussing the station gossip and latest news.

He should have known.

The realization struck him like a blow to the gut. He had expected a reply more in tone with his own – a polite and friendly exchange of mostly meaningless pleasantries, yet what he had received in return was a stinging mixture of a cold shower and a slap to the face.

He had expected a detached and coolly polite news exchange from his spy friend’s lying fingers, crafted with the finest precision to come across as perfectly amiable and nothing more. He clutched the edge of the console and slumped over. His heart was beating an erratic staccato in his chest, making him painfully aware of every throbbing vein and muscle in his body.

The dust. The dead. The rubble and the utter devastation. Julian’s throat constricted painfully with internalized reproach. How could he have forgotten the reality? Cardassia lay in ruins. He knew that, of course, at least intellectually. It was finally dawning on him that while he was enjoying the way his life had turned out, the man he never fully got to know was being systematically dismantled by his present circumstances.

He had known Garak was a survivor and therefore had no doubt the ex-spy would have the affairs of his home planet well in hand.

How very wrong he was.

Julian collapsed into his chair and buried his face into his hands. The image, never properly witnessed, burned in his eyes like the biting, sand-choked wind of Cardassia. Just imagining all those starved people, wandering the ruined streets of their homeland listlessly, all those proud and perfectly poised Cardassians reduced to desperate animals scrounging through the rubble for food or their loved ones… Garak’s delivery was almost casual in some places. The brief and to the point mention of mass graves choked him. He had learned from the tailor about the value and beauty of subtext and needed no time at all to realize exactly what Garak had meant with that summary of events. It may have read as a simple report, but Julian knew better. Burial was deeply significant to Cardassians and the very notion of dumping the dead together en masse so… disgustingly irreverently, only served to illustrate the overwhelming sense of despair and turmoil the entire race had been thrown into.

He could hear Garak’s heart breaking anew every time the rebuilding process was mentioned. The image of the once meticulous and immaculately dressed man stuck in a tool shed, forced to keep the doors open to stave off his crippling claustrophobia, forced to face the rubble of the only home he’d ever known, staring him in the face so brazenly indifferent to his plight made Julian want to crumple.

It had occurred to him that Garak lied as easily as he breathed and that any part of his reply could be merely an elaborate construct designed to accomplish some nefarious goal of his, but the openness of the delivery and the delicate contents had him shaking his head to dispel the awful thought. Why would Garak fabricate so much raw pain, where a simple: “Please, come to Cardassia” would have served? A bitter chuckle emerged past his constricted throat as he realized his friend would never be quite so obvious, yet…

It all felt too real, too visceral to be anything other than the cruel, unvarnished truth.

He didn’t even notice he had started rocking back and forth in his chair until he wondered why he felt so cold. Rising to his feet abruptly, he all but sprinted to the bathroom where he bowled over the toilet and heaved until his throat was on fire and his mouth tasted like bile.

The reflection he witnessed in the mirror was rumpled, wide-eyed and bone-weary, covered in a thin sheen of glistening sweat, trembling chin mottled with sick grotesquely displaying his shame.

He’d sent Garak such an inane message, not expecting much of a reply beyond the perfunctory and had the gall to be upset over lack of reply for several months. Instead of turning on his vaunted augmented brain to look for logical reasons why the man wasn’t able to send out a reply, he had quite quickly settled on the easiest and laziest of them all – that his friend simply didn’t care enough.

While he was here, cheerfully and ignorantly and arrogantly living on, his old friend’s life was falling to pieces around him while the Cardassian watched impotently from the side-lines. Except that wasn’t true either, was it? Garak was in the thick of it all, trying to make some sense of the ruin his life had become, trying to rebuild his beloved Cardassia and bleeding in every sense of the word at the cruel mindlessness of it all.

This had all happened months ago.

And Julian wasn’t there.

It had never even crossed his mind.

With a whimper, he collapsed to the floor and wept.