When will you open your eyes and see I'm right here?

Shayne and Damien have been best friends since the first grade. The two boys do everything together—well almost everything—and they are like two peas in a pod. Now in their senior year, Damien has been crushing on Shayne since seventh grade and he was heartbroken when Shayne began dating head cheerleader Courtney their junior year. Since then, Damien rarely sees Shayne outside of school and he feels as if he is losing his best friend and it begins to throw him into a beat of depression. Damien tries to get Shayne to see how he feels but it seems as if nothing works. Unknowing to Damien, it actually gives Shayne his sexual awakening. When will Shayne finally admit to what has been in front of him the entire time?

Before you read, here is a small guideline so you will all kind of understand where I have everyone fitting in. I know some of them may be different than how you all may see them but I did my best to place them into the social groups that I thought they would have been in while in high school <3 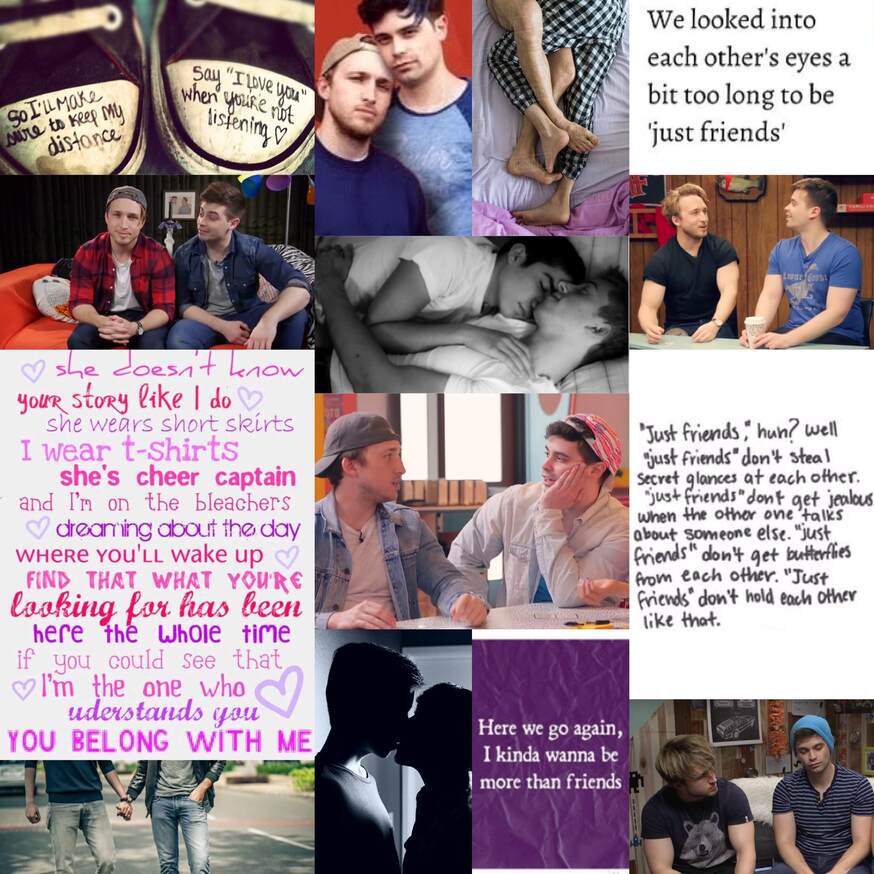 Damien sighed as he headed into the school, keeping his head down as he walked. He had been alone all weekend with his mom gone to see his sister, as Shayne was supposed to come over for a sleepover but had forgotten because of a date with Courtney. Why did he always take second place to Courtney now? He remembered their middle school years where they did everything together, from sleepovers to going to the movies. Those were some of his favourite memories.

“Shayne I’m so glad your parents said it was alright that I slept over while they were away seeing your brothers.” Damien smiled, dropping his bag of stuff down on the floor of Shayne’s bedroom.

“Me too, I love it when we have sleepovers! My parents even left us fifty bucks, which means pizza!” Shayne grinned and handed Damien a Wii controller.

Damien took the controller and sat on Shayne’s bed, the blonde sitting so close to him that their knees were touching. This had Damien’s cheeks flushing a little red but he hoped that Shayne would not notice. Shayne ordered some pizza for them right away, so they could play video games as they waited. After the Mario Kart loaded, Shayne chose Yoshi as his character while Damien went with Boo. After several rounds of the game, the doorbell rang, scaring them both.

“I’ll be right back.” Shayne smiled.

Shayne darted downstairs and he paid for the two pizzas. After grabbing two plates and some napkins, he ran back up to his room. He gave the boxes to Damien, their hands brushing in the process.

“Hey Shayne, can I ask you something?” Damien spoke.

“Yeah, what’s up?” Shayne asked with a mouth full of pizza.

“Have you had your first kiss yet?”

Shayne swallowed, this time looking at his best friend. “Yep, had it in kindergarten. I grabbed the boy and kissed him like Bug Bunny,” he laughed. “ I thought I told you this.”

Damien shook his head. “No you never said anything, I was just curious.”

“Damien, have you ever kissed someone?”

Damien’s cheeks immediately flushed and he began to fiddle with his fingers. His glasses slipped down his nose as he looked down at his lap. Finally he shook his head, not trusting his voice to answer.

“Dames, it’s nothing to be embarrassed about. We’re only in the seventh grade.”

“I know Shay, but I want to experience it. Even my friend Joven has had his first kiss and he’s weirder than I am.” Damien mumbled, glancing up at Shayne now.

“Well, if you really want to experience it, then kiss me.” Shayne smiled.

Damien’s hazel eyes widened. “W-What?” He stuttered, not sure he was hearing right.

“I mean you’re my best friend, I’ll do anything for you. So why don’t you experience your first kiss with me?”

“W-Won’t that make things weird between us?”

“Not unless you make it weird.” Shayne laughed.

“Alright, but can you kiss me?”

Damien’s cheeks once again got flushed as he saw Shayne moving close to him. He closed his eyes, feeling a hand resting against his cheek and then the feeling of lips on his, hit him. Although the kiss only lasted for a couple of seconds—just long enough for Damien to kiss back—Damien felt butterflies in his stomach as soon as Shayne pulled away.

“There, now you can say that you had your first kiss.” Shayne grinned and poked his best friends still flustered cheeks.

“Thanks Shayne.” Damien smiled now and nudged Shayne in the ribs. “You ready to lose at Mario Kart again?”

Shayne laughed. “I won’t lose if you don’t cheat.”

And thus was the beginning of Damien’s crush on his best friend.

Ever since that day, Damien had been falling harder and harder for Shayne, yet knowing that Shayne would never feel the same way about him. So he chose to keep his feelings to himself. Damien was snapped out of his thoughts when he was shoved into the lockers by one of the football players. He frowned and he pushed his glasses up, making sure to keep his head down as he continued walking. He stopped in front of his own locker, glancing a few lockers down where he saw Shayne with Courtney pressed against the lockers. Of course they were making out. He was so sick of seeing that every morning and it was starting to make him nauseous having to see that. Quickly grabbing his English textbook, he slammed his locker shut on purpose, to catch Shayne’s attention.

He watched as Shayne jumped slightly when he heard the sudden loud noise and it had him pulling back from Courtney. He glanced over and when he saw Damien, he kissed Courtney on the cheek.

“I’ll see you in class.” He heard Shayne whisper to Courtney.

“Alright baby, I’ll see you there and I’ll save you a seat.”

Damien watched as Courtney walked off, Shayne heading over to him. Shayne leaned against the lockers as he shot his best friend a smile.

“Hey Dames, how was your weekend?”

“Pretty lonely and unproductive. I didn’t do a lot while my mum were gone.”

“Shoot, we were supposed to hang out this weekend! I am so sorry Dames, I can’t believe that I forgot. I was just so excited to go to that concert with Courtney.”

Damien sighed and shoved his hands into his pockets. “It’s fine Shayne, it’s no big deal. I’ll see you in Drama class.”

With that, Damien turned and headed off to the English classroom. At least he only had two classes with Shayne; Drama and P.E. He took his normal seat by Wes, Tanner, Mari, Joven, Lasercorn, Sohinki, and Boze.

“Dames, why are you looking so sad again?” Boze asked.

“Is this about Shayne still?” Joven asked, getting smacked by Boze.

“Dude, of course it’s because of Shayne. Dumb ass.” Boze muttered as she rolled her eyes.

“Yes it’s about Shayne, it’s always because of Shayne. How am I supposed to be happy when I’m watching my best friend date the head cheerleader and I’m sitting over here like a school girl with her first crush.” Damien mumbled.

Wes sighed and he placed his hand on Damien’s shoulder. “Dude, you need to move on. I know it will be hard but that’s what we’re here for. Next time he cancels plans or forgets, just call text us! We’re always happy to come over,” he smiled.

“Yeah we are. Heck maybe we can even convince Ian and Anthony to come too.” Lasercorn smiled.

“I doubt they’d come, they’re always hanging out with Shayne, Noah, Keith, Olivia, and Courtney. But thanks guys, I’ll definitely remember to text you next time and we can all hang out in my basement playing a bunch of video games.” Damien smiled.

Shayne had gotten to school early, having picked up Courtney on his way. He was happy that they shared all their classes this first semester. He hated Math but he loved Drama and P.E. Plus having a spare with her in second period meant that they could do whatever they wanted until Drama class after lunch. He walked into the school holding Courtney’s hand and they headed over to their lockers. As always, it wasn’t long before Shayne found himself making out with Courtney against his locker. Man he loved this. He was dating the hottest girl in school, he was hopefully getting a football scholarship, and he was getting straight A’s in his classes.

Shayne didn’t know how long he had been making out with Courtney but a loud noise startled him enough to break the kiss. He slowly looked over and smiled as he saw Damien at his locker. About time he got here. He turned to Courtney and pressed a quick kiss to her cheek.

“Alright baby, I’ll see you there and I’ll save you a seat.”

Shayne watched as Courtney walked off and then he headed over to Damien. He leaned against the lockers as he shot his best friend a smile.

“Hey Dames, how was your weekend?”

“Pretty lonely and unproductive. I didn’t do a lot while my parents were gone.”

“Shoot, we were supposed to hang out this weekend! I am so sorry Dames, I can’t believe that I forgot. I was just so excited to go to that concert with Courtney.”

Damien sighed and shoved his hands into his pockets. “It’s fine Shayne, it’s no big deal. I’ll see you in Drama class.”

Shayne frowned at Damien’s words and he was about to say something, but the brunette was already walking off. Sighing, Shayne headed off to the Math classroom, taking his seat by Courtney, Olivia, Noah, Ketih, Ian, Anthony, and Flitz.

“Not really. Damien has been acting weird lately.”

“Court,” Shayne said in a warning tone. “But yes, weirder than normal. I have no idea what’s been going on with him.”

“Have you ever thought to straight up ask him?” Keith questioned.

Shayne nodded. “Whenever I do, Damien just shrugs it off and changes the subject. How am I supposed to know what’s up when he keeps doing that?”

“Who knows, maybe he’s just failing a class or something. I’m sure he’ll talk when he’s ready to.” Ian said.

“I guess you’re right. I shouldn’t keep bugging him if he doesn’t wanna talk about it.”