All Ginny wants to do is fall into bed and sleep until the sun rises. A stranger in her bed was not in the game plan. 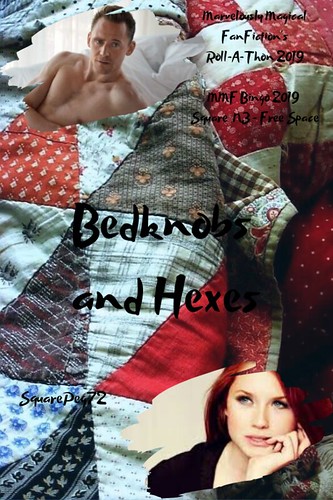 The Burrow was full. Ginny started to count as she walked towards the stairs. She stopped at twelve. That was just the kitchen and the sitting room. Even Mum’s magic could not expand the Burrow to hold the explosion of people she was seeing. Walking up the stairs, Ginny prayed her bed was empty.

“Get out of my bed.” Loki rolled towards the angry female hissing at him. “I don’t know who you are but this is my bed. I have had a long day and all I want to do is sleep in my own bed, by myself.”

“Sorry, love. Only spot left by the time we got her.” Loki ran a hand through his tangled hair. “I’ll scoot over and leave you space.”

“Who the bloody hell are you?” Ginny watched the lean man with sleepy green eyes slide closer to the wall. “I am not sharing my bed with some bloody stranger that my Mum took in for the night. This has been a bloody disaster of a day and I want to sleep.”

“Blame this on Thor and Jane.” Green eyes filled with mischief as his sleep roughed voice drifted up from the bed. “I wanted to return to Asgard but my brother insisted that we come out to the middle of nowhere for some bloody disaster for Darcy and her redhead.”

“Merlin’s beard, I forgot that was this weekend.” Ginny sank on to the edge of the bed. “Like I have time for any of this. I have a match in three days and practice is a new form of punishment every day. I have to be back on the pitch not long after the sun rises tomorrow.”

“And, I’m in your bed and you want to use it.” Loki chuckled as he laid back in the bed and stared at the ceiling. “Well, we can take care of the stranger part right now. Loki, God of Mischief and brother of tall, dim and blonde. I have no problem sharing a bed with a beautiful stranger.”

“You are still strange, but I am too tired to argue.” Ginny sighed as she started to take of the layers of Quidditch gear she was still wearing. “I’m Ginny, by the way. Sister to Darcy’s redhead and youngest in a long line of redheads. You had better not snore. Close your eyes while I finish changing.”

“My dear, I am a gentleman,” Loki pulled the quilt his was under up to his nose. “Most of the time. Don’t temp me to peek.”

“I may be tired, but I can cast a bat bogey hex in my sleep.” Ginny grinned as she watched Loki slowly pull the quilt over his eyes. “Just ask my brothers. Even Fred and George could never cast that trick as well as me.”

“Bat bogey hex.” Loki’s tried not to laugh as he listened to her change. “Sounds like something I need to learn. Are you sure you don’t want me to peek?”

“If you like bats flying out of your nose, go ahead and peek.” Ginny pulled the quilt away from his face. “According to my brother’s I hog the covers and snore. Can you handle that?”

“I am a god and a frost giant.” Loki watched Ginny crawl under the covers and try to get comfortable. “I can handle that if you can handle an occasional touch of cold feet.”

“Good night, Loki” Ginny snapped her fingers. “Stay on your side of the bed and everything will be fine.”

“Good night, Ginny.” Loki tugged on the corner of the quilt Ginny had left for him. “Sweet dreams.”