The Scavenger had shut him out of their bond since Crait, but Kylo still felt her. Her heartbeat haunted him like a ghost.

He finally had her in his grasp on Pasana. Her weight in his arms was more satisfying than claiming the throne. There’s no escape where they’re going. This time she won't tell him no.

This time, she'll take his hand.

Ben Solo will be redeemed in canon. He will choose the light.
This is a dark fantasy that asks “but what if he didn’t?”

This is an AU based on the teaser and what *could've* happened after Crait if Kylo Ren turned Rey to his side instead of returning the light. If he put his possession of her above all else. 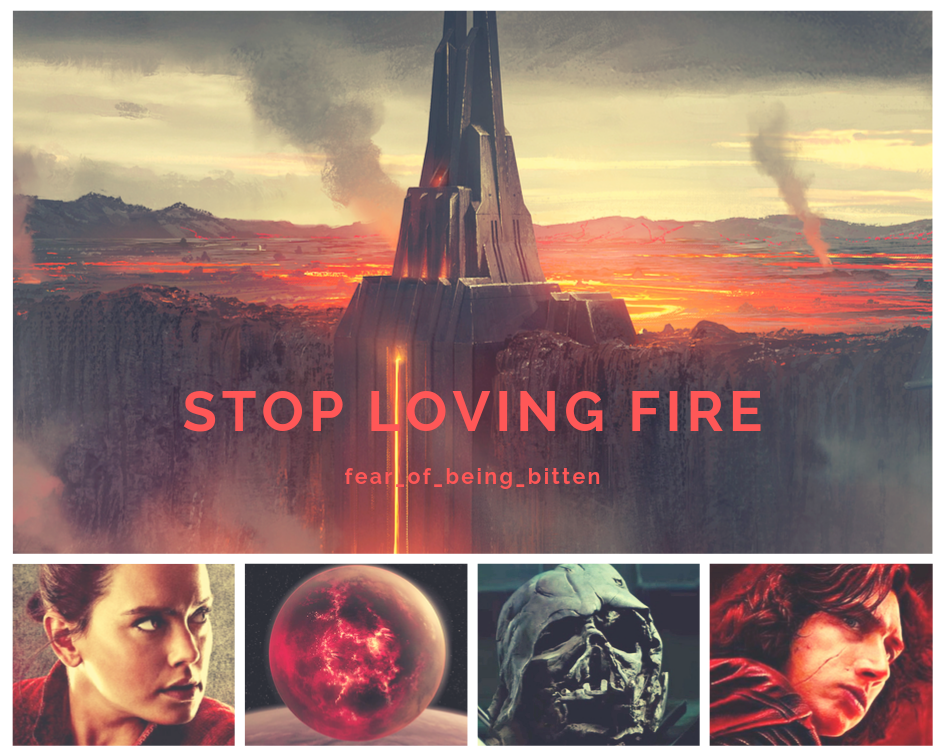 He was accustomed to the feel of her heartbeat now.  Haunting him like a ghost.

Kylo had not seen her since Crait.  She had managed to close their bond somehow,  slamming it shut as decisively as the Falcon door.  It was a surprising trick for someone of such limited training.  He wondered if she even knew how she did it.

The Scavenger was unlike any other lightsider he had known.  A better comparison was a sandstorm– erratic and instinctive power that was barely under control.  She would’ve made a devastating Sith.

He could not see her, but he felt her.  She could not deny him that.  Her heart beating in his empty chest was a mockery and a taunt.

He tried to forget her.  He couldn’t forget.

It would drive him mad.

In the months after the Rebellion’s defeat, Kylo Ren had taken his rightful place as Supreme Leader.  The galaxy bowed down to him in fear, which was far easier for him to maintain than respect.

He learned that order was an illusion.  Power shifted inevitably to the strongest hands, so he made his an iron fist.  Supreme Leader Kylo Ren ruled with a discipline that befit an Emperor, leaving behind the tempestuous fits of his youth.

He knew who he was now.

His past was dead, yet he couldn’t seem to escape it.  Luke was gone, his father too, and now his mother had joined them after a short illness.  He was all alone on a throne of silence, but it was not sweet victory. It tasted like nothing, dry on the tongue.

The Rebellion was dying, too.  It was only a matter of time until they were wiped out completely– like a spot of rust on steel.  Yet the scavenger girl stubbornly evaded him. She didn’t reach for him, not anymore, but her pulse called from across the stars like a siren song he couldn’t get out of his head.

He had to stop it, or better yet, claim it.   Feel that steady throb for himself.  Wrap fingers tight around her throat as the pulse quickened and her lifeblood roared in his own ears.  Maybe then he’d find peace.

Scouts, spies, and the best the hunters in the galaxy took the bounty to bring her back to him in chains.  If not to sit by his side, then to kneel down before him.

Yet in the end, none of them were necessary.

Her heart gave her away, as it always did.

The remnants of the Rebellion were found on Pasana, evidently hunting for the same Sith artifact that Hux required for his new pet superweapon.  Not that Kylo Ren cared any for that.

If she wanted the artifact, then he would find it first.  Find it, find her. Simple.

He could feel her telltale pulse in his veins.  She was down on the surface and separating from the fight in a valiant attempt to save her friends.  He sent the rest of his fighters to chase the Rebels and turned his sights to her.

How quaint that the little sand rat placed sentiment over wisdom, exposing herself this way.  His gloves gripped the TIE controls so firmly that the leather creaked. Worse for her to have his undivided attention.  His dead master was correct after all– her naivete would be her undoing.

That thought triggered the memory of the red room.  Standing back to back, false tears and even falser hopes.  Kylo seethed and the dark anger fueled his power.

It was beneath him to care for her– she was a fool, blind even to reject what he had to offer her, when she had nothing, was nothing– but Kylo was never good at letting go of slights and was even worse at losing.

She would not get away this time.

All his senses trained to her force signature as he dropped from the clouds to barely skirt the surface.  A glimmer of bright white flashed on the horizon It led him closer, like a beacon.

He would scare her and make her roll out of the way in a game of dominance.  She would relent and admit he had the upper hand. She must.

Following the steady heartbeat, he saw a blur of white on the gold sand in the distance.  She was holding the saber made from the shards of kyber they had split together.

He clenched his jaw and aimed for the light.

Her heart was beating as fast as his, a deafening drumbeat.  He could feel her power and the emotions she couldn’t possibly conceal from him at this close proximity– fear, anger, regret.

He knew she wouldn’t let herself be mowed down, the risk was to her pride.  She would concede to him. Let her duck and roll away, like the coward who left him bleeding and unconscious amongst the bodies of her enemies in the throne room.  Let her admit she was weaker than him and finally feel the screaming pain of loss that he knew so well.

Kylo closed in without pity.

But instead of falling down, she leapt into the air.

She flew from his grasp in an intolerable show of grace and strength, escaping him yet again.  Kylo roared in frustration as her saber arced through the air and sliced through the right wing on the downstroke.

With a hiss and a cloud of sparks, the cabin alarms sounded around him.  The hydraulics were useless. He wavered in the air, then listed left as the wing dug into the dunes.  He hit sand at incredible speed and spun out of control.

His arms flew up to use the force to shield his face from impact and debris.  His dead ship slid to a stop as he was wrenched in his seat.

Before the dust had even settled, Kylo unhooked his harness and ignited his saber to  cut himself from the wreckage. He landed on the dunes with a soft thud and threw his billowing cape over a shoulder.  Despite his fury, he couldn’t contain his eagerness to see her. His eyes traced over her hungrily and he strode forward with his weapon drawn.

She was more woman than girl now.  The pure energy of youth had been molded into elegance, her raw power honed with a fine edge of control.  He stalked across the distance and could see the flashes of trepidation and resolve on her features.

Under that, he could sense something pushed down and covered in a futile attempt to keep it from him.  She lit her saber and he lit his, the angry red tip of his blade dragging on the cracked earth as clouds formed above them.

Ah, yes.  This close, she couldn’t hide it from him.  After all these long months, unbelievably, it was still there.  Hope.   She still had a glimmer of hope for him.

Good.  He would use that against her.

He raised his weapon.  She swirled hers in a show of bravery, although he didn’t know for who’s benefit– his or her own.

Before she could attack, before they had even exchanged words, he ducked to the left to throw her off guard.  While her mental shields were down to focus on her parry, he waved his hand quickly to knock her into a force sleep.

She dropped helplessly to the ground.

He shut off her saber and hooked it onto his belt next to his.  Kylo scooped her into his arms, just as he had done in a forest long ago, and felt her heart thudding in solid tempo along with his.  His prize was in his arms, finally.

The plan was in motion.  He called to his Knights with his location.  The sabers would be stored with Ethseba Ren for safekeeping.  They wouldn’t need them where they were going.

Kylo took a moment to luxuriate in victory.  The weight of her in his arms was more satisfying than claiming the throne.  She was finally at his mercy.

This time she could not say no.