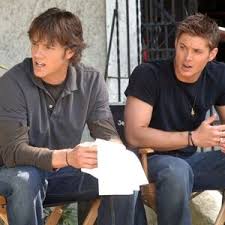 In the car on the way to check into the hotel Jared was full of questions. “Why were your parents acting so strangely toward me this morning Jensen?”

“Like super looking at me, and your mom smiling a lot.”

Jensen smiled and felt good about sharing his news with Jared. He knew it would make Jared very happy.

“You may have noticed a change in them because this morning before you got up, I told them about us.”

“you told them about us?”

“yes, I told them about us” Jensen said, smiling back at Jared as if he wasn’t dropping the biggest news of the century.

Jared couldn’t help but smile in spite of himself.

“What did you tell them about us exactly?”

“I told them that you’re gay, and that you and I are romantically involved.”

There was a pause as Jared took it in.

“And how did they react? What did they say?”

“And what did you reply? Jensen seriously, do I have to squeeze it out of you like toothpaste?”

“Alright, alright.  My Dad had a lot of questions. I said that I didn’t think I was gay because I’ve always only dated women and been attracted to women. He wanted to know how we became involved. I told him that it was from when I met Leslie at the hospital in Vancouver, I felt jealous of him, and I ran him out of town. I told my folks that I have feelings for you beyond any feelings I’ve ever had for anyone else.”

Jared’s mood-o-meter went off the charts on that statement.  Jensen smiled at Jared’s buoyed mood, which was apparent from Jared’s face.

Jared smiled ear to ear, and looked straight ahead out the front car window to avert his abashed face from Jensen.

“What else?” Jared asked hoping to sound casual about wanting to hear every word of the conversation.

Jensen indulged him, knowing this was the perfect aphrodisiac as he drove them to the uptown Dallas Hilton Hotel.

“I was clear that I was the one who initiated with you. I told them that you never came on to me. I wanted that to be on the record. My Dad did ask if I might be going through a phase.”

“I told him what I know Jared. I told him that you wonder that too, that only time will tell. But I told them that I love you.”

A bath of elation washed over Jared’s face as he heard that Jensen professed his love for Jared to his parents.  Jared was so warmed by Jensen’s words that he reached his left hand out to Jensen, who took it in his right hand.

Jensen decided to save the part of the conversation where his dad suggested he marry Katie as a beard for their relationship, for after the amours that he hoped this hotel stay would yield.

“My Mom suggested this hotel,” Jensen said as they neared the driveway. “She said the rooms are nicer here than at the Hyatt.”

They pulled into the semi-circular entrance in front of the hotel’s valet parking kiosk, where they were approached by a parking attendant. Jensen handed the keys to the attendant and accepted the claim ticket. Jensen helped Jared get their duffel bags out of the trunk, and they headed into the lobby.

It was at times like this that Jensen felt a little self-conscious about being recognized. He was with Jared, whose height was a beacon, which added to the likelihood that they would be recognized. Plus, Jensen was in his home town of Dallas. Usually, a faded sweatshirt and ball cap were enough to disguise Jensen, but Jared’s height brought a lot of attention to them. Them being together increased the odds that someone would recognize them.

Jensen didn’t want to be recognized because of the inconvenience factor. He wanted to get Jared into the room and in bed without delay. Jared sat in a chair in the lobby with the newspaper held up over his face hiding out, while Jensen checked in to the hotel, wearing his sunglasses the whole time.

“I’m going to go over to Katie’s house to talk to her. After that, I will come back and we can hang out in the hotel, just the two of us, order room service, watch a movie, do whatever you want.”

“Is Katie expecting you?”

“She’s probably expecting to hear from me. I’m not sure how many social engagements she has on her calendar in her present condition.”

“Yeah, well you should still text her to make sure she is available and willing to meet you on neutral territory. Take her to a coffee shop or a diner. Get her out of her parent’s house.”

“Yeah, that’s the plan. I’m gonna text her when I’m on my way. I’ll let her know I want to take her to a diner. I know of one near her house. It’s a good plan because they’re always open and serving food all times of day. She can’t drink alcohol in her condition, so she will probably appreciate a snack.”

Jensen texted Katie when he was waiting for the valet to get his car in the hotel lobby. He let her know he was on his way to pick her up, and that he would like to take her to the Broadway diner to talk.

Katie lowered herself into the car when Jensen got to the house. She was expecting him and came right out when she saw the car. He was glad he was spared saying hello to her parents.

“How ya doin Katie?” Jensen asked.

“Is Broadway diner okay with you or would you prefer to go somewhere else?”

“I’m fine with the Broadway diner. There is always a lot to choose from on their menu, so I am sure I can find something to nibble on while we talk”

“Okay, Broadway diner it is then,” said Jensen.

After they were seated with menus, a waitress came and took their order pretty fast. Jensen kept the conversation to small talk about the menu until they placed their orders. Not wanting to spoil his appetite and ruin his dinner with Jared, Jensen ordered a cup of vegetable soup, mostly to be polite and so that Katie wouldn’t be the only one eating. Katie ordered a chicken salad sandwich, on whole wheat toast with lettuce and mayo, and an orange juice.

“Vitamin C, and the doctor told me I should be eating about 300 calories a day more than what I normally eat at this stage of the pregnancy,” Katie said.

Jensen could really look at Katie now that he was seated across from her in the booth.  He could see how much her face had changed. Her cheeks were rosy and her skin glowed, pink and warm. Her eyes had a sparkle to them. She looked radiant.

“I must admit Katie, you look well. Pregnancy seems to agree with you.”