Based on the Ghosts of the Shadow Market short stories The Lost World and Forever Fallen.
Ty Blackthorn is haunted by his ghostly twin Livvy and writes to everyone he cares for, everyone except one Kit Rook.
Until communication between them becomes the most important way to save all Shadowhunters 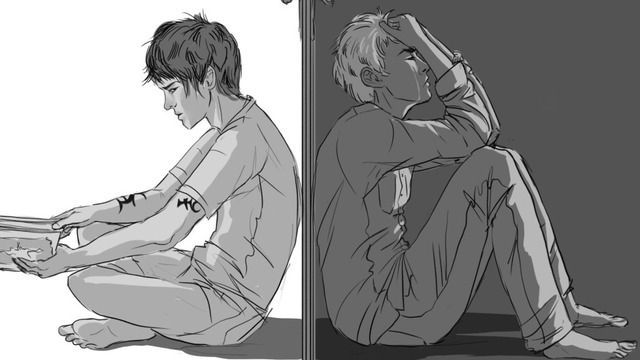 Lying back didn't seem to be helping, the sky outside was slowly gathering in darkness. Livvy seemed to be floated around somewhere outside, I felt her presence leave but as I had become so distracted earlier I couldn't recall when she had actually happened done so. in fact, I had been like this all week. It was like my system of working had just momentarily stopped.

Before today, I had stayed fixed to my schedule every single second, since it kept me from focusing too much on things. Like why I decided to study here in the first place. Or everything that I had done to distance myself from my family. Even to take some of the pressure from Dru.

Though now all I desired to do was bare all entrances to my room, hide under a blanket and stay there with my headphones. Hopefully, the teachers wouldn't be too pissed, I would study whatever I needed to catch up now, just not right now. Not for a while. Not if I had the world to deal with when I was like this.

At that moment, I felt Irene poke herself under my shield of blankets and curled up at my feet, growling softly, as if there was an attacker making me hide. And it a certain way, there is. Had been, for months.

Sighing I rose my hand to look at my watch, the light-up luminous handles told me that it was currently 3 am. For the fifth night in a row. Maybe I happened to be pushing myself too hard, it was true that having Livvy back also put a stain of my body and mind as well. I would have to make a note of it in my research journal. But later, maybe in the morning.

For now, the loss I caused would haunt me as well.

Dreams, hopes, visions. I twirled the pen, over and over, I debated whether it was a good idea to do this. Maybe just sending the postcard would have been enough. No, that had to be the vaguest thing I could have sent, Wish you were here.

Why in all the worlds did I take Livvy's advice in writing, is beyond my current understanding. He would probably not even read it. He left, without as much as a goodbye to me. It was clear he would not like hearing from me. Especially after what I had said

"I thought you cared, but you lied to me. Just like everyone else.” How could I be so stupid as to say that, even think that? Of course, he was angry at me, why wouldn't he be. He had every right to hate me for the rest of my life.

Especially after six months of nothing. He didn't wish to know about me.

Then I remember what happened on that day when the Riders came. And he vanished, and afterwards, Emma told me that he was part fey, and not just that, but The First Heir, leaving a claim to rule of Faerie if he wished. His family hunted for generations because of it.

Which I found a perfect excuse for him leaving. Even when I knew that wasn't the only one.

Livvy had gone London, to Kit, unintentionally. But still.  Afterwards, when she had told me that he had asked about me, worried for me, I spent two days trying to understand this. And made a promise I was scared to keep, "You’ll have to write to him. To say thank you."

It hurt so much. I waited to him to make the first move, wanted him to reach out to me, so there wasn't a chance of rejection. Then I remembered one of the lessons Julian had taught me. That sometimes, both people wait like this, and then they become unreachable thinking they are alone in their feelings.

I had to be brave enough to do this. My heart tightens, knowing there was every chance that if it opened up just that little bit too much, it would shatter. Still, now I would be the first to approach this broken bond openly, to ask him this question again. “Are you ever going to talk to me again?”

It sounded now like a plead, Shadowhunters don't plead or beg. However, I wasn't going to a normal Shadowhunter. Everyone knew that especially my family. So I placed my pen to the blank page. All I told myself was that this was just another entry in my diary. This was normal, just a normal entry. With months of planning.

Write, damn you, Tiberius Nero Blackthorn, I could hear Kit telling me, and I sighed in agreement.

I know that there is little chance you will read this. If you do, Livvy wishes you to respond back.

Life at the Schlormance is quite remote and cold. As you probably noticed from the postcard I send via Magnus Lightwood-Bane post.

The food standards are quite terrible, we either run out of food or like this week where it is currently day five of olive loaf. Which I can say is disgusting and dry.

Recently, and Livvy and me managed to find and save a lynx, we call her Irene, she is very protective of me, it makes me feel like a cub. She can also see Livvy, so I guess she is one of our companions now.

Kit to be honest, when you left me at Alicante with my family and went to London, I thought I should avoid you since it caused you pain to be near me after I went ahead with my plan to raise Livvy.

Now that she has returned, I have had time to go over everything that happened I realise that in my grief I broke something that we held. And that I used you and manipulated you without even thinking.

What you said, everything you say that I refused to hear, I had no right to throw that aside so lightly. No one in my life could have ever replaced my twin. But no one has ever touched me in the way you have, either. You understood me as no one has since I was so different from other Shadowhunters, Julian tried to hide me away, and others tried to make me stop, You Kit did neither.

You were there in a time where I couldn't have been in a darker place. Now I regret making you feel like you meant nothing to me, every day you not here.

For I yearn for your presence now, more than ever.

Kit, your words, I understand how you meant them. Your feelings for me.

So I think what I am so scared is that you hold a special place in my heart. So please, please, my Kit Rook, my Christopher, my Watson.

I hope there will come a time where I can hear those words on your lips again.

Welcome to my attempt to start writing the Wicked Powers. And fix Kit and Ty.
A 2022 release date was just too much for my feelings. So I write this is the hope that I help others feel less impatient, stressed, ect.
Firebird8000.