Ibaraki’s wrists were bound by ropes he could destroy with a snap of his fingers.

this was a collab between me (writing; rayfalke) and my lovely bf (art; sintoast) for the ibashu anthology! this is the original fic; it was translated to japanese for the actual publication. links below (jp only)

Ibaraki’s wrists were bound by ropes he could destroy with a snap of his fingers.

He sat in an empty room, tied to a chair, at the behest of his beloved demon king. He was growing awfully tired of waiting, but Shuten had asked oh-so-nicely, with a knowing look in his eyes and a smirk that whispered You’re gonna thank me later, Ibaraki. And, well… Ibaraki had been growing progressively worse at denying Shuten anything.

Something about them felt off. The rhythm reminded him of Shuten, but they clacked in an unfamiliar manner. They also sounded slower, more deliberate…

The door to the room slid open, and when Shuten walked inside, Ibaraki’s heart nearly stopped.

Shuten’s high heels clicked like music as he placed one perfect stocking-clad leg in front of the other. The sheer black fabric made his beautiful legs seem even longer, and it ended halfway through his thighs, squeezing just enough to dig into his soft skin in the most irresistible of ways. And if that weren’t enough, he also wore a garter set, and… oh, hell, those panties could make Ibaraki faint.

“See, Ibaraki,” Shuten suddenly said, a smirk on his lips. “I knew you’d be thanking me later.”

Ibaraki swallowed, trying to collect his thoughts. “I haven’t said anything yet.”

“You don’t have to. You’re eating me up with your eyes.” Still smirking, Shuten strutted towards him, closer and closer, until he was right in front of him. “You’re welcome, by the way.”

Before Ibaraki could reply, Shuten sat on his lap, and slung one of his stunning legs behind Ibaraki’s neck.

Ibaraki’s head spun so fast he had to be glad he was sitting. The view was beyond incredible, Shuten’s legs spread wide, his lingerie hardly covering anything. Ibaraki was so entranced he barely noticed Shuten’s hand on his chest, undoing his buttons, and then on his ass, fetching something out of his pocket…

Ibaraki blinked. “What the hell is that?”

“Never seen a lollipop?” Shuten said, removing the wrapper and flinging it over his shoulder. “I stuck it in your back pocket when I tied you up. Didn’t you notice?” 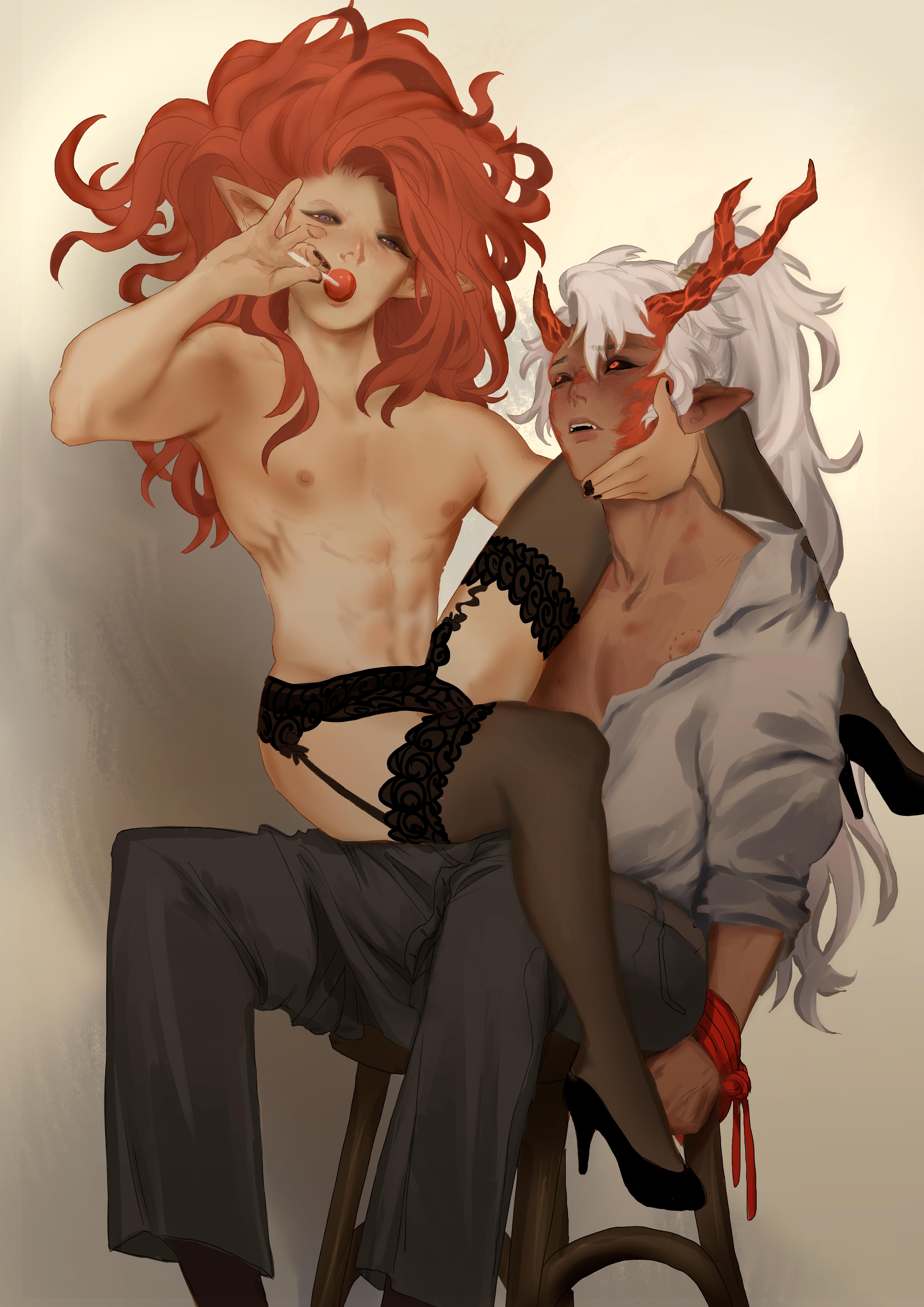 Ibaraki opened his mouth to reply, but any words he could’ve spoken died in his lips. Shuten began licking the lollipop very, very slowly, practically caressing it with his tongue, before sliding it inside his mouth and pushing it almost all the way to his throat. He closed his lips around the stick, and then, finally, pulled it out with a pop.

“You’re almost drooling, Ibaraki,” Shuten said, signature smirk on his lips. “Don’t you wish I was doing this to your dick?” Then, without pause, he grabbed the front of Ibaraki’s pants, and squeezed hard.

Ibaraki gasped, the sound fading into a moan as Shuten began rubbing him through the fabric. “You’re already so damn hard,” he whispered, voice low and filled with lust. Immediately, he unbuttoned Ibaraki’s pants with clever fingers, shoved his hand inside, and pulled out his cock. “Mmm…” Shuten hummed as he once again sucked on his lollipop, the sound bordering on a moan. “What are you gonna beg for? My mouth, or my ass?”

“I… I don’t beg,” Ibaraki murmured, his tone lacking the conviction of his words.

Shuten laughed. “Right. Then I’ll just sit on your lap and eat my lollipop,” he said, sticking it back into his mouth, sucking on it as suggestively as he did before. “If you’re still being stubborn by the time I finish it, I will leave you and your nice big cock all alone in this room, and you can jack it off yourself.”

Ibaraki grunted in annoyance. When Shuten smirked, he grunted again.

“Huh. That took less than a minute. So much for not begging.” Shuten grinned, and Ibaraki felt his face grow hot. “You can do better, though. Please what?”

Shuten’s grin turned into a smirk. He shifted so he was straddling Ibaraki’s hips, Ibaraki’s cock between his asscheeks. Ibaraki’s length brushed against the fabric of Shuten’s lingerie, and he wished nothing more than to rip it off and feel the softness of Shuten’s skin. Then, Shuten held Ibaraki’s face with both hands, leaning in so close Ibaraki felt his hot, shallow breathing. “Beg, Ibaraki. And be explicit.”

For a moment, Ibaraki forgot how to speak, lost in those crystalline violet eyes. Then, forgetting himself, forgetting everything but Shuten, he blurted, “Please let me be inside you. I’m begging you. Please.”

Shuten’s lips widened into a smile, and he whispered, “You’re not very good at dirty talking, Ibaraki. Next time, just say you want to fuck me.”

Before Ibaraki could say a word, Shuten kissed him.

Lost in the warmth of Shuten’s mouth, Ibaraki was barely aware of Shuten’s hand once again touching his ass, fishing something out of his other back pocket. When he heard the popping of a plastic cap, Ibaraki broke the kiss and looked down.

“Is that lube?” He asked, blinking in surprise. “Was that in my pocket?”

Ibaraki moaned as Shuten stroked him slowly and pressed his length against the cleft of his ass. Shuten rolled his hips, and the contrast between the coarse fabric of his lingerie and the smoothness of his lube-coated fingers drove Ibaraki insane. Once Ibaraki was dripping with lube and precum, Shuten paused, and lifted himself just enough to tug on his panties and move it aside, exposing his hole. Ibaraki could imagine how it must look—pink and glistening with lube, as Shuten had certainly prepared himself in advance, and the mental image of the demon king shoving his elegant fingers inside his own ass made him very, very dizzy.

Then Shuten moved, and Ibaraki felt the warmth of that hole against the tip of his cock. When Shuten began lowering his body, Ibaraki had to bite his lip to stop himself from making a sound.

Shuten didn’t have any shame, though—he threw his head back and moaned, moaned as he took Ibaraki inch by inch, moaned as he was stretched and filled and the sound of his voice was almost enough to get Ibaraki to come.

“Mmm,” Shuten hummed in pleasure as he reached the base of Ibaraki’s cock. He met Ibaraki’s gaze with half-lidded eyes, a blissful smile on his lips. “Feels so damn good… you’re just fucking huge, Ibaraki. No one could ever satisfy me as well as you.”

Ibaraki tried to speak, but the sound that left his mouth was incomprehensible. It was truly, truly impossible to form words when he was buried to the hilt inside Shuten’s body, when Shuten was sitting on his lap, face flushed and pupils wide with pleasure, telling Ibaraki such sweet, sweet nothings…

“You just look so smitten…” Shuten whispered, once again taking Ibaraki’s face in his hands. “I love that. Do you want to touch me, Ibaraki? If you ask nicely, I will untie your hands.”

This time, Ibaraki didn’t hesitate, all his pride replaced by lust. “Please… please untie me.”

Shuten smirked, and reached out for Ibaraki’s wrists. In the next moment, his hands were free.

Without thinking twice, he moved them to Shuten’s ass, and groped it as hard as he could.

Shuten moaned, long and drawn-out, growing louder as Ibaraki went on to fondle his cheeks. Ibaraki ran the tip of his fingers over the rim of Shuten’s hole, feeling just how stretched he was, and the words No one could ever satisfy me as well as you rang in his head, sending a shiver down his spine.

“Are you only going to touch my ass, Ibaraki?” Shuten said, a familiar smirk on his lips. “You said you wanted to run your hands all over me…”

Then, reaching behind himself to place his palms on Ibaraki’s knees, Shuten arched his back, as if offering himself completely.

Ibaraki’s breath caught in his throat. The mighty demon king looked so vulnerable, so exposed. Would Shuten do this for anyone else? Would he let anyone else see him, touch him, like this?

No one could ever satisfy me as well as you…

Ibaraki almost trembled as he reached for Shuten’s narrow waist. He felt Shuten shiver, heard a soft, satisfied sigh escape his lips. Carefully and almost reverently, as if he were touching a god, Ibaraki moved his hands upward, feeling the curves of Shuten’s muscles, the warmth of his skin. His nipples were hard, begging to be touched, and Ibaraki brushed them with the tip of his fingers, reveling in the small moans leaving Shuten’s mouth. When Ibaraki began squeezing and rubbing those irresistible nipples between forefingers and thumbs, Shuten’s moans rose in ecstasy.

“Fuck, Ibaraki…” Shuten whispered, eyes closed, lips curved into a grin. “You’ve been such a good boy… I need to reward you.” Chuckling, he leaned in, and pressed a soft kiss to Ibaraki’s lips. “Tell me your wish.”

Ibaraki was in a trance, lost in Shuten’s eyes, in his smile, in the sound of his voice. You. I only want you. You’re all I could ever want.

Shuten grinned, even wider than before, and kissed Ibaraki once more. “Good. That’s all I want, too.” Wrapping his arms around Ibaraki’s neck, he added in a whisper, “Go ahead, Ibaraki. Fuck me senseless.”

In less than a second, the chair Ibaraki had been sitting on was toppled over, as he threw Shuten and himself to the floor. Shuten fell on his back with a grunt, and then Ibaraki’s hands were on his hips, digging into his soft skin. Ibaraki moved back, until only the tip of his cock remained inside Shuten’s ass, and then thrust, bringing Shuten towards him, reaching as deep inside him as he could.

Shuten screamed in pleasure, screamed and wrapped his arms around Ibaraki’s neck, spreading his legs as wide as he could, as if begging for more. No, not begging, Shuten would never beg—it was a command, an order for Ibaraki to satisfy him in the way no one else ever could.

Ibaraki was more than happy to obey. He rammed into Shuten as fast and hard as he could, drinking in the moans leaving his lips, picking up his pace until moans turned to whimpers and Shuten’s eyes watered with pleasure. Then Shuten arched his back and came with a cry, spilling himself between their bodies and clinging to Ibaraki’s neck as he rode out his climax, shuddering and moaning something that maybe, just maybe, was Ibaraki’s name.

It was enough to drive Ibaraki over the edge, too.

He released inside Shuten and definitely moaned his name, moaned it over and over as he filled him to the brim, riding out his orgasm with Shuten trembling in his arms. When he was finally through, he all but collapsed against Shuten’s chest, burying his face in his neck as he gasped for breath.

Shuten gently ran his fingers through Ibaraki’s hair, and whispered in the softest of tones, “You’re pretty damn heavy, Ibaraki.”

Ibaraki’s face flushed as he rolled to the side and blurted an apology. Shuten replied with laughter.

Ibaraki stood up at once, nodding eagerly. Shuten once again laughed, turned, and began taking his first step—until Ibaraki reached out and held his wrist, making him pause.

“Wait,” Ibaraki muttered, clinging to his wrist. “I have something to say.”

With a smile, Ibaraki whispered, “Thank you.”