A short fic about a meeting between Dennis Reynolds & Aaron Altman. Dennis and Dee bet on who can get more phone numbers. Aaron is stuck in the middle.

Written for a Crossover challenge where I was given Dennis Reynolds (It's Always Sunny in Philadelphia) & Aaron Altman (Broadcast News). 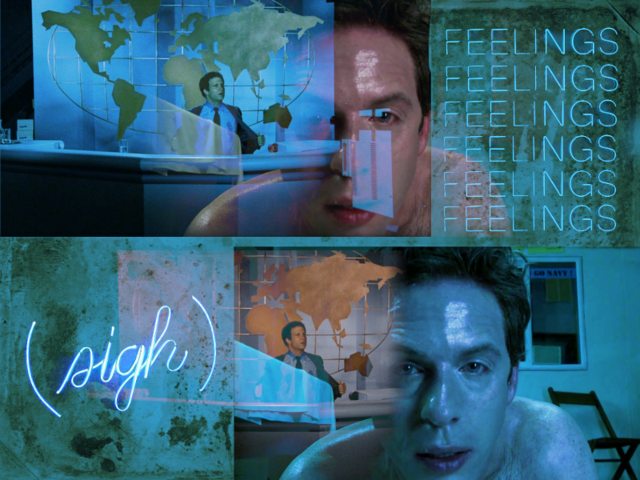 Aaron Altman sat in a grimy bar as he stared down at a letter about his change to work out of a Philadelphia new station, as a reporter, never an anchor.

He looked up to see a man standing behind the bar, a man with the confidence that should be split up in at least ten men. They lock eyes, but only briefly.

The man at the bar turns back to a woman standing next to him behind the bar. He yells, "You've got yourself a deal, baby girl. The bet is on. I know I can pick up more dudes than you in one night.".

The woman smirks before responding, "Keep telling yourself that, but dudes dig my super smooth moves.' She stumbles over the word smooth, but keeps her confidence, which similarly to her brother, should have been split up into a crowd of people.

Aaron's attention goes back over to the man and woman behind the bar. Their back and forth reminded him of the friendship he shared with the woman he was in love with, Jane, but she never felt the same way.

He wondered if the two behind the bar had a similar relationship. He wondered which one wanted more, wanted a romance that would never happen.

As Aaron contemplated the relationship of the two behind the bar, the man walked up towards his spot in the corner of the bar. The man looked intently at Aaron and said, "So, I haven't seen you around. You're not the type I usually go for, but I think you deserve a ride on the Dennis train. All expenses paid, well, unless you want something really kinky and gross, then I'll hook you up with my friend Mac. He's into all that shit."

Aaron thought the man was strange, but he felt a pull, a draw into this man’s world, the entire world of this bar. He handed over a business card, one he just got in the mail. It displayed his new position as reporter. He looked up at the stranger and said, “My name’s Aaron. I just moved to town after my last job went through some cutbacks.”

The man grabbed the card and shoved it deep in his pocket, “I’m Dennis and you don’t have to tell me your whole life story, dude.” Dennis backs away and gloats to the woman behind the bar, “C’mon Dee, I know you can’t beat that. The sucker over there gave me his fuckin’ card. Now, I can go to where he works and get on TV, so the world can see my strong cheekbones."

Dee shrugged and started to walk towards the back offices of the bar. Dennis yells after her, “I’m taking that as a victory. Plus, I can finally get close enough to bang all the weather girls. You know they want me.”

Dee turned back towards her brother and scoffed, "At least half of them have restraining orders against you because you tried to sneak into the studio 8 times and made it into the dressing room twice."

Dennis smirked, "Cynthia loved it when she came into her dressing room and I was naked holding two hurricanes in foot-tall glasses."

Aaron walked towards the bar and places a wad of bills in the tip jar. Dennis immediately took it out and pocketed it. Dennis winked at Aaron as he walked out of Paddy’s.

rainbow_gemm and salmononfire as well as 1 guest left kudos on this work!