What Would Happen If...?

When he walked in, he could see Omar sitting on a stage and a handsome-looking guy with a brunette complexion that he had never seen before, leaning beside him. The stranger was speaking and Omar looked at him in a way that Ander didn't like at all.

Suddenly, all his fears came back, when the stranger raised an arm and ran his hand through Omar's hair. It was only for a few seconds, but it was enough for Ander to feel the blood rising to his face and a wave of anger he had never felt before was made present.

This work has the point of view of each character, indicated by ( ) at the beginning.

Ps. Unbeta'd all mistakes are mine! I'm not an English speaker, any mistakes you find, are my own. I apologize for it.

Omar felt that the relationship between Ander and him was going down. During the last few months, he felt him farther away and nothing he did seemed to be enough to get him back... When they were together, his mind was miles away and all his efforts to bring him back were sterile... just now he was not able to reach him.

It was paradoxical because since Ander gave him asylum in his home, far from strengthening his relationship, it was cooling even more than an ice floe. It had been a great mistake to accept his offer to move in with him, because, deep down, Omar believed that Ander was sorry and felt uncomfortable with his presence but didn't dare to confess. It was increasingly common to see him with a glass of alcohol in his hand, taking refuge in the drink as if it were its best friend. Omar couldn't recognize him.

So, finally, he made the decision he had been putting off for weeks. Just thinking about being away from Ander caused him even physical pain, but he could no longer ignore what was happening between them and keep playing the fool ... it was simply unsustainable.

He had decided what was best for both of them. With the first pay of the bar, he had enough money to rent a small flat near the neighborhood where his parents' store was located. Thus, even if it was through Nadia, he could keep an eye on Baba's health and try to continue with his life. He had to take back the reins, finish his studies, face the consequences of his decisions and move on.

While he was meditating on all this, he finished folding a pair of shirts and left them next to his small sports bag; there was no more space. He sat on the bed and smiled sadly as he remembered the last time he and Ander had fucked right in that room.

The steps of Ander climbing the stairs two at a time, made him return suddenly to a nothing promising present.

It was over. Guzman knew the truth and hadn't been precisely thanks to him. All these months of anguish, of feeling the worst shit... had finally ended, and with it his friendship with Guzman, but above all, he knew that he had lost Omar.

He was afraid that this moment would come after all. The fact that Omar had to endure in recent weeks, Omar had even taken time trying to understand him, but by the time Ander entered the room and their eyes met, he knew he had finally lost him. The determination of Omar's face along with the small suitcase on the bed was the unequivocal signal that Omar was sick of his fucking lies.

-"I’ll have to come back for the rest..."- Omar replied bluntly.

He wasn't able to bear with it for any longer. He dropped onto the bed watching his relationship shatter in front of him and he knew he had it well deserved.

-"I knew it, Omar... I knew everything,"- he whispered crumbling.

-"Since when?"- Asked incredulously sitting again on the mattress.

-“What does it matter? Even going one day without confessing would be enough to make me a coward, a lowlife… I'm worse than Polo. Polo killed someone in a fit of rage, I've lied to everyone. I've deceived the people I care about the most…”- he continued in a trembling voice.

–“I don't deserve Guzman, nor do I deserve you,"- he continued with tears in his eyes. -"I deserve to have no one... Please leave."- He finished while clumsily trying to keep the rest of Omar's clothes inside the briefcase.

-“Ander, Ander, calm down!”- Omar cornered him against the wall trying to reassure him, covering his face with both hands, -“it’s ok…. Mystery solved. You were put in an impossible situation and didn't know how to react. You fucked up. You are a human being. We fuck up all the time…"- He snapped wrapping him with both hands around the back of his neck while touching his forehead with his.

After a few moments, Omar separated his forehead to look Ander directly in the eyes and without letting go of his neck he confessed: -"If you think you will get rid of me just because of this, you're very wrong."-

Ander looked at him without believing what he had just heard. He closed his eyes and continued to cry but feeling a little lighter, sketching an incipient smile. Slowly he leaned on Omar and hugged him as tightly as if he never wanted to let him go. Omar began to give him tender kisses and they both merged into a caress so real that it was no longer necessary to say a single word. 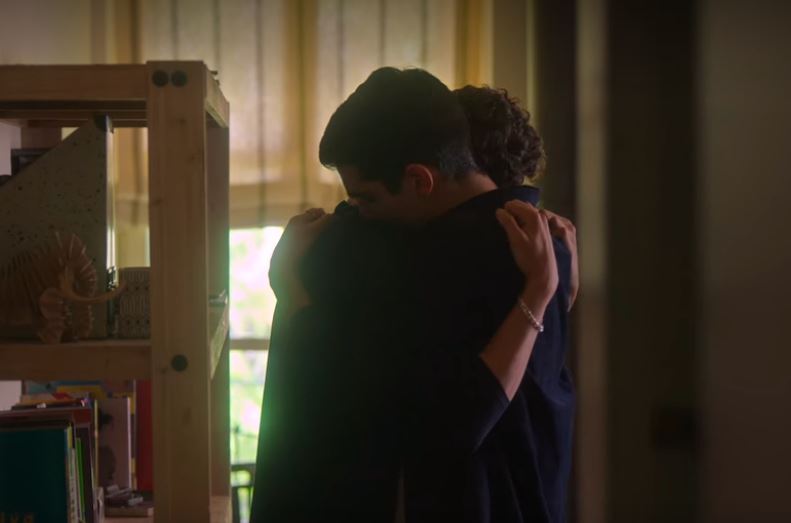 While the production team reviewed the last details of the sequence, Aron Piper and Omar Ayuso split up with a smile.

- "This time we made it at the first shoot, colleague ..." - Omar laughed while giving a warm blow with his fist clenched on Aron's shoulder.

- “Yeah, we did it, right? It was good because crying several times for the same scene is exhausting. - The actor replied smiling too.

- “Will you hang out tonight? You know, to celebrate the end of the season… ”- Omar asked Aron, while they both walked off the set.

- "I don’t know dude... tomorrow we have a call with Ramon at noon to start reviewing the script of the third season and I don't want to mess it up..." -

- "Well, yeah, but we could also relax a little, couldn't we, buddy?" - Omar insisted fearing deep down that Aron felt uncomfortable. He didn't know exactly what was going on with him, but it had been while since he enjoyed his partner's closeness too much.

Leaving aside that annoying little voice that whispered in his ear that he perfectly knew the real reason, he looked towards Aron to study his reaction and spit the question: - “The most partying guy is now the best bearer, isn't it?” -

Aron couldn't avoid a laugh, - "Now that I think about it, I do feel like having some beers... –

- "It sounds better..." - Omar nodded trying to hide the emotion and taking the phone opened the WhatsApp application. - "I've agreed to go with some friends to Teatro Barceló" –

- "Well, that's it, see you later, then" - Aron confirmed, as he said goodbye to Omar walking away to his car.