uhhhhhhh. yeah. i dont know what to title this. i mean, i had a title before but right when i was gonna put it in as a draft in ao3 i started not being sure about the title so now the title is just. hospital jpeg.

i forgot to colour the img but whatever

Karamatsu ran to the middle of the road junction, rushing to reach his motionless elder brother. He tripped as he ran, barrelling onto the rough, hard tarmac of the road, but he cared not for the pain he had obtained from the fall and scrambled to Osomatsu's side.

"O-Osomatsu-- Oh God-- Oh no-- " Karamatsu gasped breathlessly, clutching his older brother's hand as he cautiously turned him to face up. Osomatsu made a grunt sound as his back slowly, carefully touched the ground below, but nothing more.

The elder's face was covered in blood, spawning from a gash on the side of his forehead. His torso and clothes were drenched in blood, his legs, his arms were soaked -- There was just so much blood--

"Oh no, oh no, oh no no no no no--" Karamatsu stammered to himself, struggling to regain any form of composure. "O-Osomatsu, c-can you hear me!? I-I-- Oh God, no-- Osomatsu please--"

Karamatsu only received a weak, strained gaze from Osomatsu, before the elder was forced to close his eyes again as he groaned from the pain. Karamatsu feared moving him, holding him, afraid that he would hurt him further, and instead just squeezed his hand tighter.

Karamatsu's eyes turned to the pavements, the sidewalks, the stationary cars of the junction. "S- Somebody! C-Call an AMBULANCE! PLEASE! "

He made eye contact with a lady who had exited her vehicle, causing the lady to snap out of her shocked state and hurriedly pull out her phone to dial a number.

Karamatsu's breath hitched for just a moment, but that was all it took for his flood walls to crumble down into dust. He cried, he cried hard , clutching Osomatsu's hand with both of his as tightly as he physically could.

"...o-osomatsu, please , I-- I c-can't lose you...!! " Karamatsu wailed, his vision going blurry from the tears, as he pressed his forehead into the back of the elder's knuckles.

Osomatsu's free hand, just barely, managed to reach the younger's hand and close around it, making Karamatsu pull away slightly from their hands to see him.

Osomatsu was giving him a kind look, his eyes pained but gentle, as his thumb rubbed across the back of Karamatsu's fingers. "...shh, shh..." he breathed quietly, "...it's okay, kara, it's okay...."

Karamatsu bent down, his forehead touching the top of his brother's as he continued to cry. Osomatsu just kept cooing "it's okay" repeatedly in an attempt to soothe him. 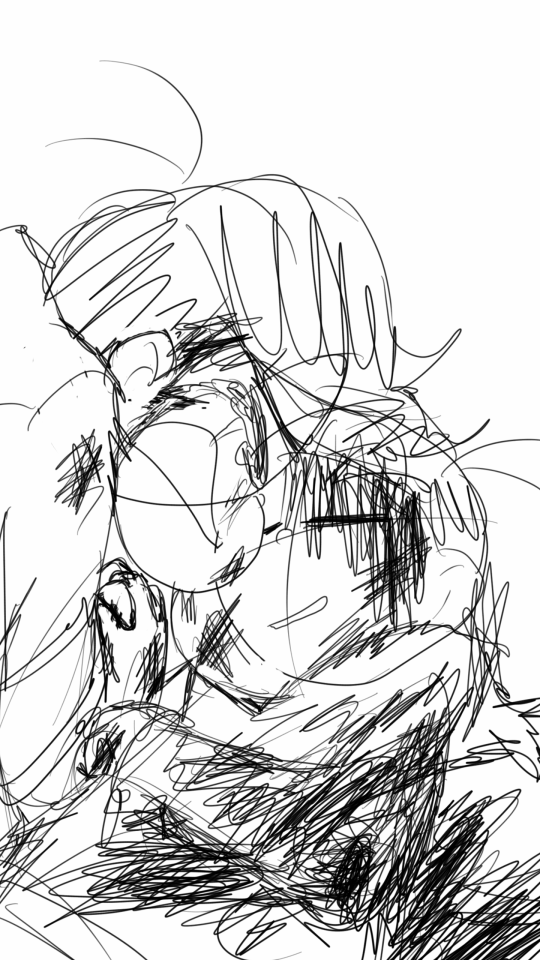 Osomatsu gave no real reply, likely having had no strength to do so. Instead he gave a soft, gentle smile, which just made Karamatsu cry even harder.

There was the quickly-approaching sound of an ambulance siren, before the lights of red and blue filled the air.

He couldn't leave, he couldn't be not alive. Not after seeing Karamatsu like that.

Osomatsu's memory of laying on the road was vague and blurry (he couldn't even remember what hit him), but the image of his little brother crying over him was burned into his mind. He couldn't leave him. Not after that.

He can't leave him behind.

It's really damn hard to see anything when the ceiling light above is absolutely blinding, though.

It took a rather long while for his eyes to adjust, but when they finally did he found himself staring up at the white ceiling. Turning his head to the right proved that he was in a hospital bed, and... and Karamatsu was sitting by his side, holding his hand while dozing.

Karamatsu had a few plasters and bandages on him. He must have gotten some scrapes when he hit the road. At least they all seemed like surface wounds, so nothing too bad happened to him...

Osomatsu squeezed his little brother's hand, trying to coax him into waking up. Unfortunately that just made Karamatsu hug his arm like a pillow instead and continue his snoring.

The elder tried to bring his other hand over to pat Karamatsu's head, but found his left arm in a cast, bound in an arm sling. Trying to move it in any way hurt severely. He hadn't realised how bad his condition was (despite literally everything hurting) - His entire torso and legs were covered in bandages, the white cloth partially stained with red, and he's pretty sure there was a bandage wrapped around his head as well.

He doesn't want to imagine the hospital bill.

Osomatsu settled for resting his nosebridge against Karamatsu's forehead. He heard his baby brother groan softly before leaning into the warmth.

He'd protect him with his life - He had decided that long ago. He's just glad he managed to put that into practice.