The Elf Who Saved Christmas

Maglor leads a quiet life as a Research Fellow at All Souls College, Oxford. When his scars begin to hurt on one damp November evening, the last thing he expects is to find a letter on his desk summoning him to a mysterious meeting - a letter signed only with an initial, and bearing a stamp from the North Pole...

Inspired by this gorgeous piece of art. I have embedded it at the end of the fic; the piece embedded at the beginning to illustrate the opening scene was an extra, because bunn is lovely.

Find more of bunn's work here on her DeviantArt page. 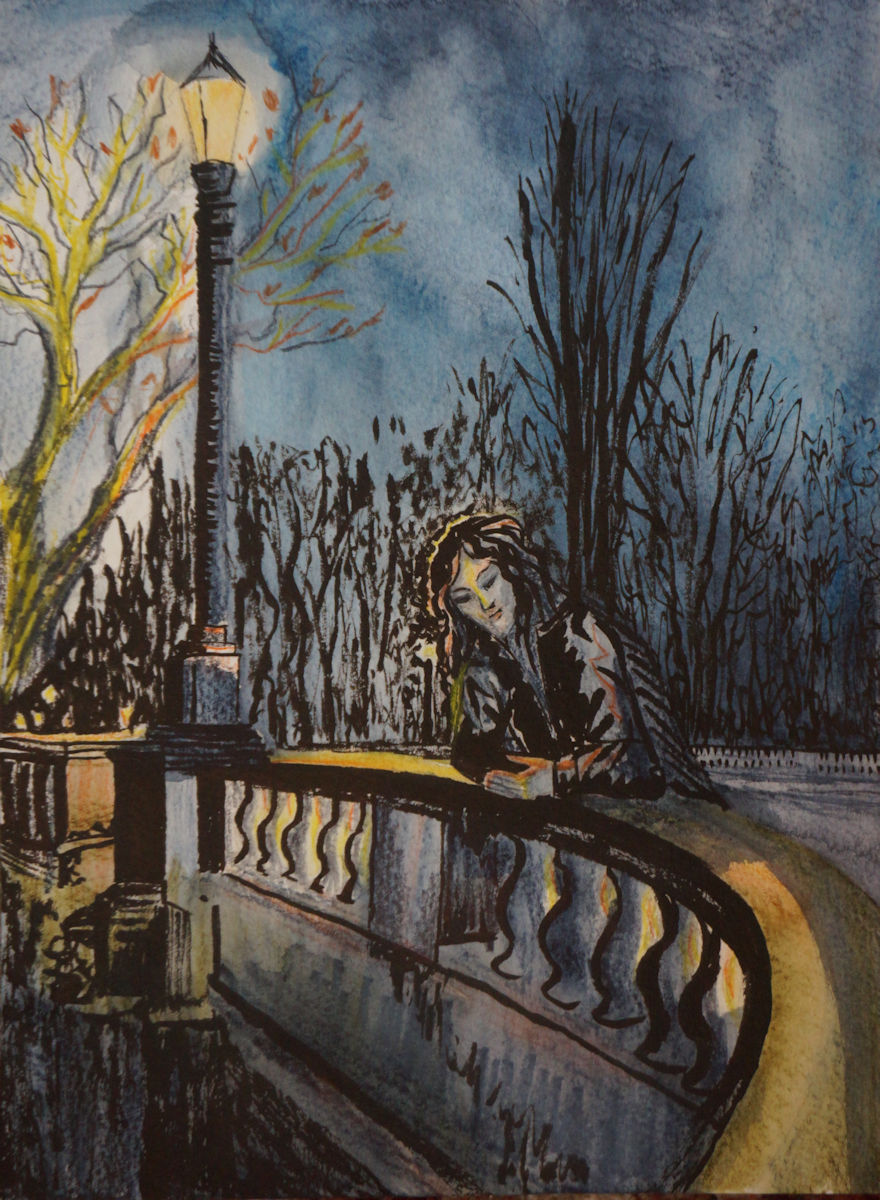 There was a drab, lingering warmth to the November air, as though autumn had yawned and stretched its arms and settled down for a nap. A few skeletal leaves clung to the trees that arched over Magdalen Bridge, refusing to let go and make way for the stinging frosts of winter. They rustled and sighed as a low breeze curled through the streets, sending ripples along the Cherwell and stippling orange lamplight across its gleaming surface.

The streets were quiet. Students huddled inside gated colleges and rented houses, cramming for exams. Clouds hung heavy over the spires and rivers, hiding the stars and threatening rain. Locals tutted and drew their curtains and stayed at home.

It would not rain, Maglor knew.

He leaned his forearms against the parapet, left hand folded over right, hiding his scars out of habit. There was no-one around to see, but after thousands of years one grew weary of the double takes, the smothered expressions of pity and revulsion, the hesitant questions and the attempts not to stare. He could wear gloves, he supposed, though in the mild English climate he didn't really need to, and the extra fabric and heat were an irritation. Besides, nowadays, gloves outside the depths of winter would raise more questions than the scars themselves.

At the boat station away to his left, wooden hulls knocked together. Water sloshed softly between them. A car engine purred as it navigated the roundabout at The Plain. It was a perfectly ordinary autumn night in Oxford.

Maglor shrugged. You're getting old, he told himself, and gave a humourless smile. His official paperwork might list his date of birth as 1965, but he had been old long before there was a settlement by the oxen river crossing where the Cherwell met the Thames. What were you expecting? That they would come looking for you, after all this time?

He wasn't even certain whether he hoped for that or not.

Strange, though, that his scarred hand should be paining him now, after all these years. The last time had been over eighty years ago, the night before he went over the top and into the bloodbath that was the Somme. Mere days afterwards, a schrapnel wound had left him sprawled in the mud of that reeking waste land – and weeks later, in a hospital at Le Touquet, he had passed the time by telling ancient tales to a young British officer struck down with trench fever...

But Ronald Tolkien had been dead for two decades. Nobody living suspected the truth behind those tales. Old fool, he scolded himself again. He shouldered his guitar and turned away from the parapet.

Along the High Street, soft gold light whispered through curtains and blinds. Window displays were dark; the air tasted of smoke, and old stone, and petrol. The spires of Magdalen and the squat square towers of University College floated above the mist, and phosphorescent spheres wreathed the street lamps like will-o'-the-wisps. The four-storey gatehouse of All Souls watched Maglor tolerantly as he passed through, as though reminiscing about the generations of Fellows who had lived within, keeping odd hours and slipping in and out at the dead of night.

Maglor nodded at the Warden as he crossed the quad. A perfectly ordinary evening, he told himself, flexing his scarred hand inside the pocket of his leather jacket.

Yet when he entered his rooms, alarm thrilled up his spine and pricked at the back of his neck. Instinctively he reached towards his right hip, though he had carried neither dagger nor sword there for centuries.

There was an envelope on his desk, made of thick, creamy-white paper, adorned only with an address in a thin, spidery script, and a stamp that resembled nothing he'd ever purchased from a Post Office in Britain. The envelope had not been there when he left. Nobody would deliver post at this hour, and certainly no-one would enter his room to do so, rather than slip it quietly under the door.

Easy, now. He relaxed his muscles into the predatory stance that had been second nature to him for thousands of years, and felt his way into the Song. What he found there surprised him. A cold wind that tasted of spice and fir trees...the soft bat-bat of snow against a window pane...dawn light through ice...laughter and joy...an ancient wildness...yet he was alone in the room. He was certain of that.

He crossed to the desk and picked up the letter.

His heart gave a double thump and his breath chilled in his throat. They know my name...

Every muscle and nerve screamed, fly, fly! - but he breathed deeply and forced calm through his limbs. No-one at All Souls could possibly have guessed. He was careful with his glamour; for ease he kept to his true appearance as closely as he could, without looking too like an Elf, and he never drank more than a glass or two of wine at college dinners, never put himself in a position where the enchantment or his own guard might slip. Most of his colleagues weren't even aware of his musical abilities. There was nothing, nothing to give him away. No, this was something else. Someone – something – had found him. If he ran, no doubt they would only find him again.

Codrington Library.
Come alone.
Do not be afraid.

Frowning, he turned the envelope over and examined the stamp. The picture it bore was hand-painted – a shard of ice in a frozen landscape, and a great arc of light behind it, burning in a deep blue sky.

Maglor wondered if he might be needing a pair of gloves after all.