When Charlie starts to bond with his sentinel, Ian, at one of the crime scenes for Don's sharpshooter case, he discovers an entirely new world.

This is for the Every Fandom Reverse Bang.

The wonderful g_love99 provided this picture from which I drew the inspiration for this story. 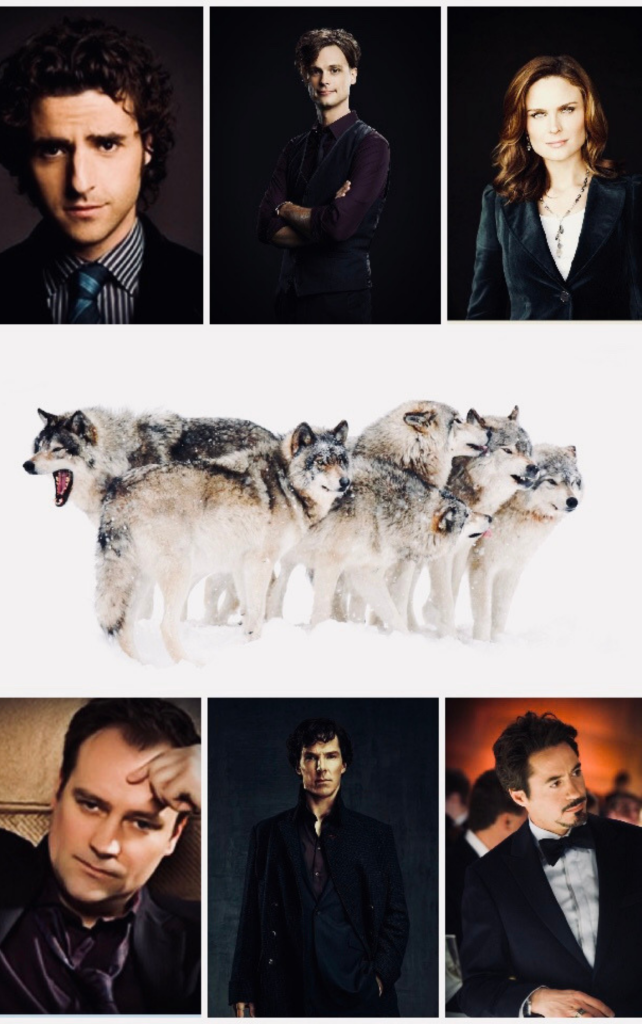 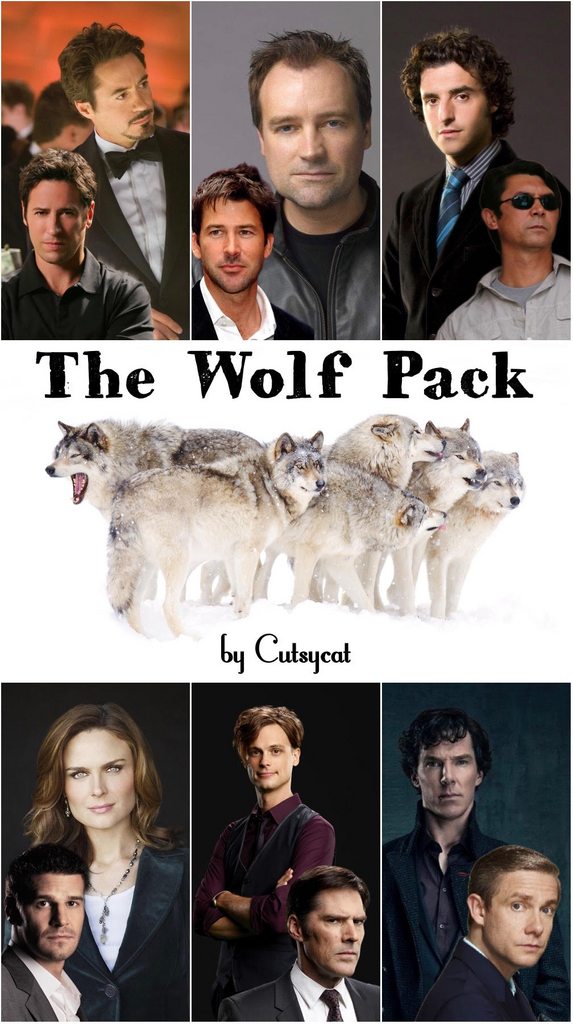 Charlie had known since the early age of 4 that he was a guide. The numbers in his head had basically forced him online and with them had come his own wolf spirit, though it was smaller than the other wolf spirits that Charlie had seen. Don came online as a sentinel not long after Charlie did.

His classmates bullied Charlie because he was so much smarter and thus stranger than them. They also thought him weak because his spirit guide was so little. They called him a fuck up, freak, and useless nerd among other things.

His brother had had no choice, but to defend him, which had ended up forcing his brother online and Don’s wolf had become a solid presence to protect them both. Charlie thought it was great that he was a guide and his brother a sentinel. He thought that this would mean he got to spend more time with his older brother who he loved.

It was even true, but instead of bringing them closer together like Charlie thought it would; it just grated on his brother even more. In Don’s mind he could never get away from his little brother because his brother was his acting guide. Don hated it. He couldn’t wait to get his actual guide.

Alan being a guide himself had immediately recognized his sons’ abilities and gotten them to a guide and sentinel center for training and registration. He couldn’t be more proud of both his sons. He hoped that this would bring them closer together.

When it became obvious that his sons needed different things, he and his wife made the difficult decision to each take charge of one son. As a guide, he stayed with Don who needed a guide and Margaret, his sentinel, went with Charlie. Charlie was already well developed in his guide abilities despite being only 13 and would do in a pinch if Margaret were to zone.

Though, honestly, Alan wasn’t worried about Margaret zoning. She’d been pretty steady ever since she gave birth to Charlie. Both Margaret and Alan’s spirit guides were wolves as well. It wasn’t surprising as wolves were the most common type of spirit guide for both guides and sentinels, which wasn’t saying much since guides and sentinels were still in the lower 1% of the population.

Once Charlie finished university, he and Margaret returned home and Charlie took a job working at CalSci. His brother wasn’t home much, working fugitive recovery in New Mexico with temporary guides as necessary, but when Margaret developed cancer Don immediately returned home.

Don took a job with the FBI in LA to be close to the family again. If Charlie had hoped that having Don living nearby again would bring them closer together, he couldn’t have been more wrong. Charlie hid in P vs NP and denied that his mother was dying while Don was by Margaret’s side every day accepting what was happening and knowing he needed to make the most of every day he had left with his mother.

Needless to say they drifted apart after their mother died. That never stopped Don from feeling protective of Charlie, however. Nor did it stop Don from visiting when in between cases or occasionally when a really tough case had him in knots.

They’d been starting to mend their fences as Charlie pitched in to help Don with the occasional case, though they still had their disagreements. Don still hadn’t found his guide despite multiple attempts with multiple women to make them his guide. Unfortunately if the deep guide/sentinel bond wasn’t there, you couldn’t force it. Don had to learn that truth the hard way, but he’d finally learned it. He no longer tried to imagine what wasn’t there in his relationships.

Being a sentinel was a strength when it came to his cases. That extra warning time that something was coming or his slightly faster reflexes had saved his life more times than he could count, both in fugitive retrieval and now in LA. Of course, the chance of him zoning was also increased. There were two unbonded guides on his team and he had to be partnered with one of them whenever the team separated just in case he zoned.

He hated the restriction. Despite being team leader, he felt handicapped by these requirements. Both Megan and David were wolf guides and they understood his emotions quite well and did their best not to make things worse, but it did nothing to stop Don from feeling like a caged wolf not allowed to roam the wilds.

Charlie helped out on basically every case these days, now that Don realized Charlie’s security clearance was actually higher than his. Of course, their relationship was still strained. Charlie was still trying to please his big brother and while Don no longer felt the big brother desire for time away from his little brother, he still hadn’t come to terms with how Charlie behaved when their mother was dying.

Also, it was hard for Don not to feel inferior to Charlie at times. His brother was just plain smarter than him and that truth galled Don at times. Still he was adult enough, now, not to let those feelings take over his life.

When they had what appeared to be a serial killer sharpshooter, Don thought nothing of inviting Ian Edgerton down to help out. He’d met Ian before when they were both working fugitive recovery. In fact, Ian had been Don’s teacher at one point in time.

There was no denying the man’s sharpshooter skills. Don knew Ian’s help would be immeasurable. What he didn’t expect was what happened when Ian met Charlie.

Don’s sense of danger had immediately started going wild as he and Charlie approached the latest crime scene. He’d been doing his best to tamp down on them as he couldn’t see anything that would be the cause of his increased awareness of his surroundings. Charlie noticed and slowed down, happily launching into his explanation of where he thought the sharpshooter had probably been aiming from.

Charlie turned to face Ian, angry at what he perceived as an insult. The numbers completely left Charlie’s head as the world narrowed and all Charlie could see was Ian. He had no idea what he said after that.

Don couldn’t help the growl that escaped his throat. He knew why his sense of danger had been amped up now. The danger wasn’t to him, it was to Charlie.

How dare Ian try to claim his little brother? Charlie was too good for Ian. Ian didn’t help matters, growling himself only seeing Don as another sentinel that might take Charlie away from him.

Don cursed. He tried to get in between Ian and Charlie. He couldn’t let his brother bond with Ian. Ian was all wrong for Charlie. Charlie needed a home and Ian’s work always had him on the road.

“You can’t have him. Pick someone else Edgerton. He’s too good for you,” Don snarled.

David stepped in at that not wanting additional bloodshed to breakout and recognizing that Ian and Charlie had already started bonding, “Come on, Don. You know you can’t stop a true bond.”

As David pulled Don away, Megan stepped in to lead Ian and Charlie to the closest sentinel and guide center where they could appropriately bond without worrying about messing up a crime scene. Don hated it, but he couldn’t do anything to stop it either. All he could do was focus on the shooter case and hope that Charlie would be ok. For Charlie’s part, Don wasn’t even on his mind. He was too busy bonding with his sentinel.

Ian hadn’t known that it could be like this. He’d worked with a number of guides before, but it had been practically clinical. Even the few guides he’d had sex with had never touched him like this. He’d heard the stories that everything changed when it was your true bond, but he’d never believed them.

He’d thought they were just fantasies or people looking through rose colored glasses. He’d been certain it would never happen to him. Not only because he couldn’t possibly be that lucky, but because as a sharpshooter he’d been trained to put all emotions out of his mind and just be while he waited for the shot.

He didn’t see how anyone could get into his head with a mentality like that, but Charlie just fit. There was a calming effect Charlie exuded, but at the same time Ian could feel his excitement at finally meeting his true sentinel. There was also a touch of worry, though, Ian couldn’t figure out why Charlie would be worried and it was soon lost beneath the rest of Charlie’s thoughts as they completed their bonding. They spent about three days gorging their senses on each other before they surfaced enough that they could actually think about someone or something other than themselves.

“Oh god, Don.” Charlie whispered aloud, continuing on in his head, “He’s going to hate me, now, I just know it.”

Ian felt the spike of fear from Charlie and immediately wrapped his arms around Charlie. “What’s wrong?”

“Because you messed up his case by bonding with me?”

“No.” Charlie shook his head. “Though, he probably didn’t appreciate that either.”

“Because I beat him once again. He’s the older brother. He should have bonded first and yet, I stole the limelight once again.”

Charlie snickered. “That’s true. He’ll probably be pissed at you for corrupting me.”

“Little does he know.” Ian winked.

Charlie grinned back. Of course, it wasn’t all fun and games. The center had to run them through some tests to make sure that both of them were in full control of their abilities and there were no adverse reactions to their bonding.

Bonding tended to strengthen both guide and sentinel abilities. It was rare for guides to be affected, but not unheard of. More frequently sentinels suddenly had their dials turned all the way up unexpectedly and sometimes that meant they needed to go through training again in order to handle their new capabilities.

Fortunately, everything seemed to be fine for Charlie and Ian and they were released a few days later. “Has it really only been five days?” Charlie asked as they left the facility.

“Yeah. So much has changed. I mean where are we going to live? How are we going to combine our lives? It’s all well and good to be bonded, but there are so many new problems to solve now.”

“And you’re the kind of guy who needs to solve all the problems in front of him.”