Tyrant Runs in the Family

Tatsumi's sister Kanako invites herself for a visit during her summer break. Morinaga and Tatsumi organize a picnic to introduce her to some people, and it ends up being quite an event. In the crowd of our favorite yaoi couples, one guy catches her eye.

Yet another entry in the Tokyo Yaoiverse. This one starts off with a Tatsumi/Morinaga lemon, but then it turns into a fluffy shoujo romance for Kanako. I have no regrets for this sudden insertion of straight romance! Even fujoshi girls need some lovin'. Oh and I aged her up about 2 years - to 17. There are a lot of cameos, but the story is mainly Koisuru Boukun/Junjou Romantica. I hope you enjoy! I'd love a comment or two - good or bad.

Chapter 1: Not Ready for This

Not Ready for This

Morinaga looked up from his dinner preparations. Tatsumi sounded like he was panicking.

“Yeah, but Morinaga is still working and I have the lab...I know that, but still! We don't-” He held the phone out and stared at it. “She hung up.”

“What's going on, Senpai? Why did Kanako call?”

Tatsumi rubbed the back of his head. “She's bored at Matsuda's*. She just invited herself to Tokyo and she'll be here tomorrow afternoon. For a week at least.”

“Huh.” Uh oh. How's he going to deal with this? Kanako figured out that we're dating a long time ago, but he's never admitted it to her. Well, she's seventeen now, and going to college next year. But Senpai is going to go overboard.

Tatsumi jumped up and stalked all around the living area. “We have to rearrange the guest room. Make it look like it's your room. And then you'll have to sleep on the couch. Or I can. Or, you could go stay with Isogai or Hiroto? Argh! I have to spend some time in the lab every day! What's she going to do while I'm there? What's she going to do while I'm home? I have no idea how to entertain a teenage girl! WE don't even know Tokyo very well yet, so how I can I take her sight seeing? I hate sightseeing! Books! Manga! I'll ask Misaki for a bunch of manga for her to read.”

Morinaga rolled his eyes. While he wasn't sure what teenaged girls got up to nowadays, he was sure sitting around by herself for a week reading manga wasn't it. And there was no way he was going to go stay with Isogai, that sneaky bastard, or cramp Hiroto's playboy lifestyle. “Calm down, Senpai. Let's wait and see what she wants before you go making all sorts of crazy plans. I'll sleep on the couch, if you insist.”

“Of course I insist! You think we're going to sleep together while my baby sister is in the same house? Pervert!”

“Senpai! I would never...Anyway, she knows we're living together, and I'm pretty sure she knows we're a couple. I thought.... Are you denying me? Do you want to hide us again?”

Tatsumi froze in his frantic pacing. He looked over at Morinaga in shock. “I-I'm sorry. Morinaga, I didn't mean it like that.” He walked around the counter into the kitchen and rested his head against Morinaga's chest. “I'm sorry. But it's not about you or us – I'd be like this with a woman also. It's just...I'm not comfortable letting Kanako see me in that way, I guess. Or maybe I still think of her as a child.”

Morinaga sighed and hugged his silly Senpai. “I get it. I'll be on my best behavior, I promise. But Senpai, she's known about us even before we actually were an 'us,'” he chuckled. “It would be strange for me to just disappear. And she's very mature about these things.”

“What she thinks in her head, and what we show her in real life is different. Isogai said she's been reading BL manga for heaven's sake!” Oh? Morinaga hid a snicker. This might actually be fun, for me at least. Kanako will cheer me on, I'm sure.

“But, we should reassure her that everything's fine, and that we're just two normal people in love, don't you think? That would be healthier.”

“Okay. You freak out. Kanako will laugh at you, or scold you.”

Tatsumi pulled out of his arms and glared at him. “It's not funny! I can't help it if these kinds of things make me uncomfortable.”

“There's only one way for you to get over that – just do it until you get used to it. Ow!” Tatsumi punched his arm and turned to stomp off. “Wait, Senpai.” He captured him in another hug, from behind this time.

“You're going to the lab tomorrow morning right? And Kasanoda will be there – ask him what kids are doing for fun. It'll be Saturday, so I can transform the guest room while you're working.” He had another idea. “Let's plan a picnic in the park for Sunday. We can invite Misaki and ask him to bring his boss Kirishima. He has a daughter not much younger than Kanako. And Isogai can come too – she likes him. And maybe Nowaki and Kamijou. It will be fun, and I'm sure they'll all have ideas for her, things to do in Tokyo and so on.”

“That...sounds alright. I guess. But, we're going to end up surrounded by gay couples. Isn't that weird for her?”

“Yup. And she'll probably have a blast. Our friends are fun!”

“Maybe. But so am I – crazy about you.” He feathered kisses up Tatsumi's neck to that very sensitive area behind his ear.

“Ack! What are you...!” Morinaga spun him around and planted his lips over Tatsumi's, who responded as he always did, melting in Morinaga's arms. “St-stop! We have to...uhn! Ha!” Morinaga's hands were already busy, one up his shirt, the other squeezing his ass.

“Senpai,” he breathed in that tone. “If she's going to be here starting tomorrow, and I have to behave myself for an entire week...” Tatsumi gasped, realizing what Morinaga was saying.

“Don't worry about it.” Morinaga's hand wormed its way inside the back of Tatsumi's pants. His senpai was already twitching.

Morinaga picked up Tatsumi by his ass, legs wrapped around his waist, and staggered towards the bedroom. Lucky thing he had a good sense of where it was since he was too busy kissing to see where they were going and he couldn't be bothered to turn on any lights. Eventually, his shins hit the bedside and he fell forward on top of Tatsumi, grinding their cocks together.

Tatsumi yanked Morinaga's shirt up and off while Morinaga tugged Tatsumi's pants down and gripped his erection, already leaking in anticipation. “Ahh, Tetsuhiro! Don't...!”

“Come for me, Senpai! It's okay.” Mmm, I love how fast he responds! It only took a few more strokes of his hand and Tatsumi peaked, shooting streams of semen across his stomach.

“Senpai, I'm going in.” Tatsumi's arms came up to grab his waist and pull. “Oh, Senpai! So good, you feel so good!” There was nothing in the world like it – the feeling of being inside his lover. He moved with strong, deliberate thrusts. “Is it okay? What do you want, Senpai?”

“Tet-suhiro! Don't stop! I want...you! Just you!” Tatsumi matched his movements, meeting each thrust with a lift of his hips. Morinaga bent down and kissed him – sloppy, gasping kisses punctuated with moans and cries of pleasure from both of them.

Through a haze of desire, Morinaga realized Tatsumi's legs were trembling – not from passion, but strain. As much as they both loved facing each other, it was hard on hips that didn't want to spread that widely. So Morinaga pulled out just long enough for Tatsumi to turn over and jam a pillow beneath his stomach. Morinaga laid full length on top of him, supporting his weight on his elbows, and slid back in. He could go deeper this way, the angle was better for Tatsumi, and much less physically taxing.

They were beyond talking now, just grunting, “Hah! Ah!, Uh!” as Morinaga sped up. Bodies slicked with sweat, wet flesh slapped and squished, neither of them capable of caring for anything beyond the sensations of penetrating and being penetrated.

“Senpai! Senpai! Nggghh!” Morinaga's cock pumped deep inside as Tatsumi emptied himself onto the bed. He collapsed, flattening Tatsumi beneath him.

Summoning a last ounce of energy, Morinaga rolled off him and they laid there side by side in the dark room, panting. The bed dipped as Tatsumi moved and Morinaga reached for him. “Don't go, Senpai. I'll...” But Tatsumi was merely crawling over to snuggle against his side.

“Idiot. Just relax. And don't worry about sleeping on the couch. I...you're right. Kanako isn't stupid, and I made a promise to myself to stop acting like a fool about us. Just don't tease me too much in front of her, okay?”

He felt a light kiss on his shoulder. “I lo-love you too, Tetsuhiro,” came the very soft reply as Tatsumi drifted off into a light sleep.

I should clean us up, and go make dinner... And Morinaga fell asleep beside his Senpai. 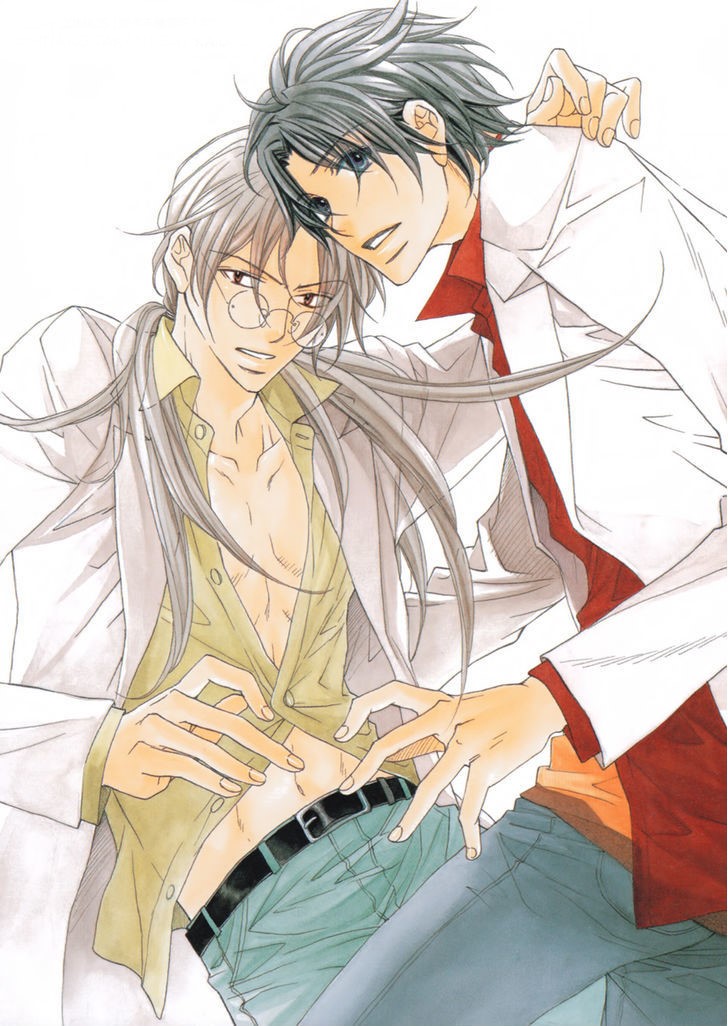 *Matsuda is the older woman/family friend who helped raise all the Tatsumi kids after their mother died. Kanako's school has dorms, so she lives on campus during the semester.