Chapter 2: Haunted By The Past

"Go away and never return!" A little helpless cub it was. Perhaps I should be able to sympathise with that, because I very well know the feeling.. My very own father let me feel like a little pathetic helpless cub every time he treated me like trash. Once again he‘s standing in front of me.

“You are dead!” A event I never spilled even one tear for. My mother understood, even though it caused her a lot of pain. Ahadi never accepted me.

“Taka, you are a disgrace!” Flames are visible in his eyes. I've forbidden others to ever use that name again, and now I was given a reminder to the why. It brings out all of my weaknesses I hoped had left the system by now.

“Scum! Worthless king!” he called out to me and then slowly he started to disappear, back inside the fog he came from.

“It's a lie!” With a hard blast Scar awakened from his nightmare, that by far wasn't his first one. Occasionally these nightmares concerning his past disturbed him at night, keeping him from having a good and peaceful sleep. And strangely they found their way to him more and more lately.

“Another nightmare? Welcome to my reality!” Zazu commented while Scar walked pass his boned cage. The lion either didn’t hear him or ignored him.

Exhausted Scar moved himself outside. He felt like the nightmares had dragged all energy out of his system. The fear made his mane rose, which perhaps for his black locks wasn't such a bad start of the day. Minor downside, it was his siesta he had just aggressively awoken from and he was planning to return to sleep in a few hours anyway. Outside the cave, he saw his reflection in a puddle of rain. Indeed, they do look great!  He didn't even have to do anything for it. Well, of course there was something he needed to do. He couldn’t continue living like this for too long therefor, somehow he needed to make a change. However, not himself. No, definitely not himself! You can't change perfection, as Scar thought he was.

He just needed some distraction. Of course, the situation was still desperate. If only he was able to have it all more under his control again, perhaps then he gained some more appreciation from his subjects, as he liked to call the lionesses. He claimed never to have gotten much appreciation, in all phases of his life.

Now he was standing on the Pride Rock, overthinking and looking at what life had granted him. Scar had lost the overwhelming feeling of ruling the kingdom a long time ago. He needed to find that back. He figured only then the nightmares were to disappear permanently.

“What to do first? Give the hyenas some management? A waste of time! What else..” Ah.. 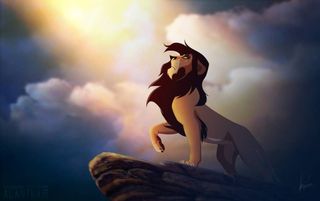 (I thought the Scar art by Alantka on DeviantArt, does fit this chapter very well. Asked permission to add it.)