"Can't you not even have a little sympathy for me?" Scar acted like his pride got touched. "Don't mistake the colour of this small beating thing here inside of me with the colour of my manes," he gushed, almost in a singing tone. Dramatically Scar held his paw on his chest, right at the place of his heart.
-
"Be my guest, Nala. Grab yourself a gazelle.. Shoot!" Scar heaved a disappointing sigh. "I'm out of them!"
-Chapter: The Madness of King Scar

A dark era has reached the Pride Lands, with Scar as its king. With his chaotic mind, Scar has his eyes drawn to Nala. While he's focusing on his future and the 'ghosts' of his past, the mad, driven to the edge king doesn't seem to see the danger happening right in front of him. Does Scar have anyone left on his side or has he, with his actions of the past, created his own Lion Graveyard? Is Taka still hidden somewhere inside or is our pal truly destined to be doomed?

Note:
- All rights regarding The Lion King belong to Disney.

I work with the Italic font to reveal a character's thought.

Before this story will continue, I am going to edit/partly rewrite the previous chapters. Thank you for understanding.
Process: 2/23 chapters done 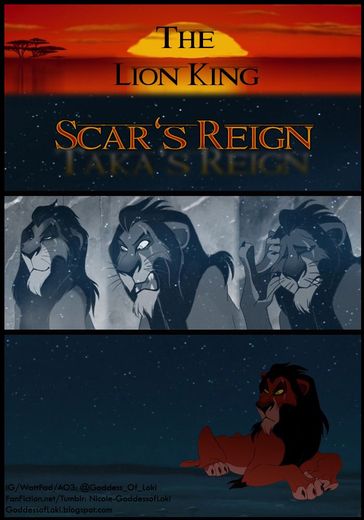 *All rights regarding The Lion King belong to Disney!!

Ever since I watched The Lion King film as a kid, the film carried on in my imagination after it ended. I couldn't believe my favorite Disney character was gone forever. And after knowing of Disney's deleted scene of Scar, & a bit of his past, my imagination developed this. Be welcome in my imagination:

In my head I imagined watching a (animation) film called 'Scar's Reign' with of course the voice of Jeremy Irons! It starts with an animation saying:  'Scar's Reign'. At the top you see a close-up of his eyes, the scar is clearly visible. His gaze becomes less mean when the name Scar is changed to Taka. It changes back soon.

Well, let's see how Scar's Reign will look like ;).