We had decided to walk in together rather than one of us waiting at the front for the other to come down the aisle.  The “aisle” had been created in the rehearsal hall by setting up folding chairs on either side. Chris’ side and mine. But really anyone could sit anywhere and did.

Near the top where the justice of the peace who would marry us stood was Janet. She acted as my Maid of Honor or Best Man. Whatever. He wore a beautiful pink pantsuit to match our boutonnieres. She wore gray pearl jewelry to match our tuxes.

Chris’s dad, Robert, stood up for him on the other side, wearing a tux just like ours.

I nodded at a guy nearby who nodded back and reached over to a sound system to start the music we had chosen to play as we walked toward our future.

At Last by Etta James.

With a bright warm smile, Chris linked his arm with mine and we began to walk down the aisle.

When the song finished and we stood before the justice. I was prepared to approach the man performing the ceremony, but to my surprise, Chris stopped and turned to me.

My eyes widening, I whispered, “You aren’t going to leave me at the altar, are you?”

He laughed, soft and affectionately. “No. Wait here.”

Chris turned and stepped over to his dad, who had walked away for a moment and when he returned I saw that he had Chris’ cello case, which he handed to Chris.

As I watched, perplexed, Chris opened the case and took out his cello. His father brought a chair over to the front and Chris walked over holding the cello and bow.

“This is a surprise for Zach. I wanted to play something before we got married. We met because I play the cello and auditioned for Zach for the Mason Philharmonic and well, since, after auditioning for Janet Miller, I got the job.” He laughed and so did I. “I auditioned with Shostakovich Concerto Number 1, but right now I’m going to play Zach’s favorite piece,  Saint-Saens, The Swan.”

I was smiling so wide now my face practically hurt, and maybe there was a tiny bit of moisture in my eyes.

Janet had moved closer and she put her hand on my arm and I turned to look at her.

“Did you know about this?”

Chris sat, settled his instrument, and began to play. The piece was gorgeous. Absolutely my favorite he played, and God he played it well. I closed my eyes, letting the beautiful notes wash over me, soothe me, fill my chest with pride and warmth.

And as the last note played, the hushed audience broke out into applause. I did too.

Chris rose and bowed, because yeah, he knew he was great, why not flaunt it.   He came to me, still holding the cello and leaned in to give me a quick kiss before he ran back to put the cello away. Once more his father took it away. When his dad returned, Chris gave him a hug and then came back to stand next to me.

His eyes were shining as his gaze met mine. “Okay?”

He exhaled slowly and I realized then he had actually been nervous. Amazing. He was gorgeous and remarkable. So talented.

“I love you,” he whispered.

“I love you. Let’s get married.” I took his hand and we stepped up to the justice of the peace.

I found Jan later at the reception standing by herself. She had a glass of champagne in her hand, but it looked mostly untouched.

Across the rehearsal hall, Chris was surrounded by admirers and his parents. He looked happy and handsome.

“I’m so happy for you,” she said to me as I gave her a hug. I might have been more than a little buzzed.

“He’s incredibly gorgeous,” Jan agreed. “But you give him a run for his money.”

I chuckled. “I’m just drunk enough to almost believe you.”

“Well I’m not drunk, dummy, and I think you’re great. And I love you.”

“Trying to make me cry?”

“I wish.” She watched me take the champagne from her and down it. “Don’t forget you have a honeymoon coming up.”

“Oh, he can take advantage of me.”

I hugged her again. “Thanks by the way.”

“Everything. Allowing him to audition. And giving him the job. And letting us be.”

“You proved yourselves worthy of that trust. So far. And you’re, I don’t know, like my brother. My way more gorgeous brother, but still.”

“Now you are getting too mushy.”

“Need help with him?” Chris had appeared as if by magic. He laughed. “No, I didn’t. I walked over here. He’s pretty drunk.”

“Tell me something I didn’t know. You think you can handle him?”

Chris smiled as he wrapped his arms around me, holding me upright. “Yeah I think so.”

“Ready to go to the hotel? The limo is waiting.” She eyed me and shook her head. “Hope he doesn’t barf.”

Jan rolled her eyes. “It really is love then isn’t it?

Chris laughed which just made me laugh and then he laughed harder.

“Come on, Romeo. Let’s ditch this party and go and get naked.”

I grabbed his lapels and kissed him. “Love you.”

“Okay, I know, babe husband.” He led me away from Janet, giving her a wink as he did so. “Let the married life begin.”

Dreams: I know this final chapter is a day early for your birthday (don't worry there's a birthday flash on Sunday too), but I got it done and wanted you to have it in plenty of time. Happy Birthday my friend. And like the song says, this fic is done At Last! 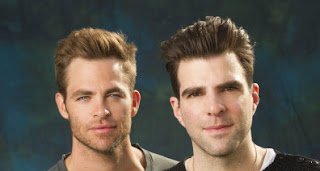