welcome to the world

Cecil is a mysterious shop owner who seems to know far more than he should, Dana is the shop itself, and Carlos is a new arrival in the strange, supernatural town of Night Vale

I wanted to screw around with an urban fantasy type setting for Night Vale, mostly because I wanted werewolf!Carlos and I am pretty pleased I managed this. 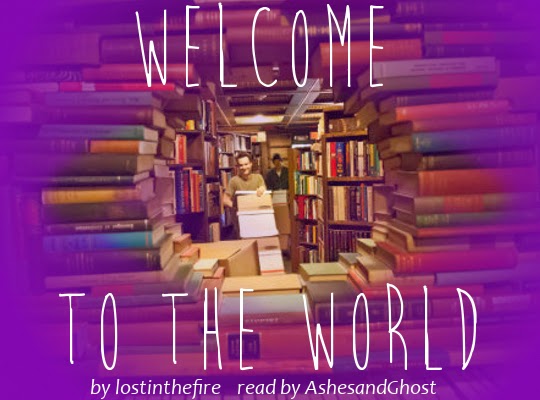 Cecil never let the shop go quiet. There was always music going in the background, sometimes loud enough to quicken your heartbeat and sometimes soft enough that you hardly heard it at all.

People had theories about him, about how he knew as much as he did, about the music that surrounded him. They thought he might be an audiomancer or perhaps some kind of creature not of this world with powers that no one would ever understand. Stories surround him and at times, some of those stories were that he fed off of all that belief and pondering.

No matter what he was, the town knew one thing. Cecil was a source of information. He knew things that no one else had the power to know and he shared that information like someone dealing cards, freely and to anyone who was willing to play the game. He had no issues revealing what he knew, and that made him valuable to the little desert community he had taken up shop in.

Some people assumed there was a catch, a price to pay for getting information, but no one was entirely sure. Everyone agreed that the town did get a little stranger when Cecil arrived, but no one could entirely say when that was. Their parents knew of Cecil and so did their grandparents. Everyone was aware of him and no one could think of a time when they weren’t.

No one could think of a time when Cecil wasn’t there and while some people found that fact unnerving, others found it rather comforting.

Dana perched on a counter top, her legs dangling off the edge as she watched Cecil shelve some books. She felt comfortable and content, warm and cared for when Cecil did things like that. She loved being maintained and stocked, loved when he would take the time to wander through her and simply do little things to maintain her proper form.

Because even though Dana had her projection, her true heart was that of the store itself. She was a creature that lived and breathed but not in a body that had a heart or legs. She was just as alive though and, when she so chose, she would interact with anyone who interested her.

At the moment she found herself running incorporeal hands over Cecil’s cat, the creature that seemed to know just as much as his master but was much less willing to share the information. Though, of course, he would be more amenable if given a good pet or the appropriate attention.

She always loved sitting with him though, even though he could be standoffish. It didn’t bother her and she was content to let the time pass by until the door opens and a frazzled looking man enters.

She could read him immediately and knew in a flash that he needed help.

Cecil heard the doorbell of the shop ring but it was Dana, with her concerned expression and urging hands, that got him moving to the front of the shop, replacing the books he had in his hands with the cup of coffee he’d been drinking.

“Hello,” he greeted, a smile on his face. He wasn’t looking at the man, assuming it was simply another customer looking for something or other and he could get back to shelving as soon as this was done.

But then he found himself looking up, catching the panicked expression and something about it, about how this stranger held himself and how he watched his body move beneath the lab coat….

He found his heart quicken and his hands grip the coffee just a little more. He hardly knew this man, but he knew-- felt in his very core-- that this was something that was meant to happen.

And be it destiny dictating his thoughts or simply the fact that Cecil was easy for people with good hair, he found himself falling in love instantly.`

Carlos was a scientist first and foremost. He was a man who believed that the world made sense, that there were logical explanations to things, that things could make sense if you just tried hard enough to understand and learn.

But after his first night in the new town, he found himself being something else too.

The attack left him shaking and scared. Blood stained his pants where he’d been bitten and he walked with a limp. After that first night though, recovered and having had a chance to himself, he did not show fear but curiosity.

And when he found himself changing, when his body stretched and morphed into that canine shape, he knew he was onto something very interesting indeed.

Which is part of the reason he found himself at the shop that day. It seemed that the town was one that was quite vibrant when it came to it’s supernatural community and Carlos was eager to learn more.

And when he entered, he could feel the strangeness of the place, feel that it somehow had a heartbeat, a pulse of it’s own. He blinked and in that moment, a young woman appeared to him, smiling and dashing off in an instant after.

Then a man appeared, he was not tall or short, thin or fat. He blended in with his background, seemed to fade at the edges somehow but he was there and he was smiling like someone had just given him the best gift in the world.

Carlos and Cecil stared at each other, neither of them blinking as if it were a contest. Soon enough it was Dana, her form flickering into existence and prodding Cecil lightly, her finger passing through him, that made either of them react.

“Hello,” Carlos said, his body shifting for a moment, weight going from one foot to the other before he offered an awkward smile. “I….I was hoping I could get some information.”

Cecil smiled brilliantly, looking so excited at the idea of being able to help. “Of course! What do you need? Dana and I can help, it’s what we’re good at.”

Carlos nodded, looking a little relieved. “I just arrived and I….There was this wolf, I was attacked. I heard through the grapevine that you were the person to see when things like that happen. That you…help people.”

Cecil couldn't help it, he laughed a little. “I have that reputation, yeah. I can help though. Do you know anything about your condition or are we starting from scratch.”

“Scratch,” Carlos informed him. “I didn’t even know things like this existed until a week ago.”

Cecil clapped his hands together. “Great, let’s get to work then.”

They go through the store, Cecil pulling down books and items while babbling on about what Carlos can expect. Carlos listened, occasionally making notes. Cecil saw the pen in his hands and shook his head but didn’t say anything.

Carlos didn’t understand but he kept writing all the same.

After a time, they head to the counter, Cecil setting things down and getting a bag. “Consider this free of charge,” he said, his eyes on Carlos. “If you really want to do something for me, you can owe me a favor. Or take me on a date, one of the two.”

Carlos sputtered for a moment but nodded slowly. “I’ll uh…I’ll keep that in mind.”

Carlos collected the bag and nodded. “Thank you. For all of this, I really appreciate it.”

“No problem,” Cecil assured him. “Really, we’re here to help.”

Carlos nodded, looking down at the bag. “I’ll uhm…I find you if I need any more information. Is that all right?”

Carlos looked around for the girl in question but didn’t see her. “All right. Thank you again.”

Laughing a little, Carlos shakes his head. “All right, I should get going.”

Cecil offered a wave. “Hopefully I’ll see you. And welcome to Night Vale!”