Valery is terrible at putting his pen down and getting some sleep. Boris is brilliant at making him.

Well, this is my first fic for this fandom, my first fic on AO3, and my first fic at all in years. I was utterly inspired by ElenaTria’s amazing artwork, along with several comments on it, and I just had to write this.

It’s unbeta’d and I wrote this on the Notes app on my phone on a long bus ride but I think I did alright.

If Chernobyl fic or Valoris isn’t for you, please go elsewhere and refrain from hassling me.

*Edited to add the image that inspired this (with permission!)*

“It’s late Valera. The paperwork will be there tomorrow. Get some sleep.” Boris’ gravelly voice broke his concentration suddenly and he realised the other man had entered his room without him even noticing.

Valery blinked tiredly and looked up at the cobalt eyes boring into him. He rolled his shoulders and took a deep breath, but didn’t drop his pen. “I need to get this done now, Borja,” he said. “If I don’t, it’ll just keep me awake anyway. I’m alright, really.”

Valery had intended to go to bed, he was exhausted. But he was instead sitting on his bed, propped up against the wall with his feet dangling over the edge, scribbling notes in the margin of yet another document. He heard Boris softly grunt in admonishment above him. Boris’ fingers carded through his hair gently and he allowed himself to lean into the touch slightly. Boris cupped his cheek briefly before placing the hand on Valery’s knee, a blush left behind on Valery’s freckled face.

“You need to rest, Comrade,” Boris said loudly. “You’re going to collapse if you keep going at this rate and I’ve got enough to deal with without having to scrape you off the floor and find a replacement,”

The hand squeezed his knee reassuringly, and he looked up to watch Boris stalk towards the door and disappear though it with a slam, an answering slam from the room beside his following shortly. Valery counted to ten and sure enough, his own door clicked back open quietly enough that their listeners would have no idea of his return.

“It’s late, Borja,” he whispered in response. He felt his cheeks grow a little hotter; he couldn’t help it when Boris showed his well hidden softer side, especially if it were towards him. But nonetheless, he felt compelled to finish his notes. Men had died on his orders, what was missing some sleep in comparison?

He reached over to snatch a cigarette from his pack, inhaling deeply before resuming his notations. A beat passed and he found himself unable to stop himself from glancing up at Boris’s face again. The taller man smirked ever-so-slightly, a smirk Valery recognised and one that he still couldn’t quite accept he was capable of inducing in the beautiful man stood before him. Boris locked eyes with him and grasped both of Valery’s knees.

Boris said nothing as he slid his hands up Valery’s thighs.

“It’s late...” he whispered again, but Boris was suddenly inches from face, looming over him, and the rest of his protests died as Boris’s lips claimed his own fiercely. The pen slipped from his fingers and the cigarette was abandoned in the ashtray as he tangled his fingers in Boris’ thick silver hair and moaned silently into the kiss. He felt Boris’ shove aside his already loosened tie, his fingers unbuttoning his shirt part of the way and skimming across his nipple. The sensation shot straight to his quickly awakening cock and he couldn’t help but arch into the touch. Boris’ nails scraped over his soft belly, playing with the fur there; and before his insecurities could make themselves fully known, thick fingers were yanking at his fly and a strong hand was rubbing him to full hardness through his briefs.

Boris’ lips left his but there was no chance to register the loss. Boris slid to his knees and tugged Valery’s hips closer to the edge of the bed. Valery swallowed deeply and sat frozen. They’d used their hands on each other and he’d fantasised about finding the courage to use his mouth on Boris, but he never dreamed Boris would want to do this to him. For him. Never dreamed anyone would, really. The sight of this strong, stern alpha male submitting to him like this, kneeling between his legs and tugging at his fly was intoxicating and far beyond any fantasies he’d ever allowed himself. Not knowing quite how to react, he fumbled some more of his buttons open, but Boris reached up to bat his hands away before he could finish.

“I want you like this,” he murmured, voice deeper and rougher than usual, thick with desire. “You look perfect.”

Valery swallowed again and let his hands fall to the bare mattress, unwilling to argue the point with Boris and not even sure if he was capable of enough coherence to do so.

Boris tugged his trousers down a spot, just enough to reveal his cock straining against his briefs and leaving a damp patch on the fabric. Valery had never felt more vulnerable in his life. Boris shoved his face against Valery’s briefs and inhaled deeply and Valery collapsed back onto his elbows. His fingers dug into the rough fabric of the mattress as he stifled a moan, and Boris tugged the briefs over his erection and finally freed him to the air. He looked down to meet Boris’ hungry gaze, his eyes sliding shut reflexively when Boris wrapped his thin lips around the head of him and flicked his tongue across his frenulum. His hips bucked up into the overwhelming heat of Boris’ mouth. It was unlike anything he’d ever felt before, anything he could have imagined, and as Boris grasped the base of him in a tight fist and began bobbing his head up and down his length, tongue dipping into his slit or pressing against his frenulum with every stroke, he felt the world shift fundamentally for him. How could anything be the same again after knowing this sensation, and at the hands of Boris, his Boris? How could he possibly be the same?

A hand grabbed his and guided it to settle in Boris’ hair and he was thankful for the grounding effect it provided. He was utterly helpless, fully surrendered to the firm press of Boris’ lips, the talented flicks of his tongue, the dig of blunt nails into his thigh and firm grasp of the broad, unbearably masculine hands he’d so often found himself staring at and craving.

Boris squeezed his thigh reassuringly and he felt a thumb slide over his drawn up balls and press firmly into his perineum. The intensity of the sensation was such that he could only inhale sharply, voice thankfully catching in his throat. Boris pulled back just enough that his lips were resting against his swollen head.

“That’s it Valera, let me take care of you,” he whispered against Valery’s cock, the sensation of breath against wet skin forcing another strangled gasp from Valery before he was again engulfed in the tight wet heat of Boris’ mouth. Valery had been wrong, there was nothing submissive about this for Boris. Valery had absolutely no power here, he was entirely at Boris’ mercy and he could only trust that Boris would indeed take care of him and guide him through safely.

Boris set a slow, tortuous pace that had Valery panting in desperation. Every time he felt his balls tighten further and the wave of pleasure building in him begin to coalesce in his belly, the hand around his base tightened harshly and Boris’ lips left his cock for just long enough for him to come back down from the edge. It was terrible, brutal. It was the best thing he’d ever felt. He was experiencing more pleasure from each denied orgasm than any he had ever wrung out of himself with his own hand and just when he thought he couldn’t possibly take more, the thumb resting lightly on his perineum began massaging him in gentle circles, pressing slightly harder every few rotations. He heard himself grunting softly with every press, though by this point his awareness of anything but the sensations below his waist was hazy.

“Borja... oh fuck... please...” he gasped, beyond desperate for release now. Boris clearly decided to take pity on him as the mouth around his cock picked up speed, Boris swirling his tongue harshly around his tip on every upstroke and stroking his thumb back and forth across his perineum, occasionally pushing his balls up higher. The muscles in his thighs were tensing, he was gripping Boris’ hair for dear life. He felt his balls clench up, felt the ball of pleasure in his belly sink lower and lower, felt himself swell slightly and suddenly he was wonderfully, gloriously, painfully thrown over the edge.

The thankfully whispered cry of ecstasy was ripped from his lips as he bucked frantically, hand tightening in his hair and cock pulsing rope after rope of his seed into Boris’ waiting mouth. He felt Boris swallow reflexively around his head and choke on his release and another gasped, pained moan escaped him. It seemed to go on forever, it was unbearable in its intensity, beyond overwhelming. All he could do was feel and whisper Boris’ name over and over like a prayer.

When the harsh throbbing of his cock began to ease off, his hand dropped limply from Boris’ hair, almost knocking the ashtray and abandoned cigarette from the bed. Boris finally released the slowly softening cock from his mouth and looked up fondly at the half-collapsed man above him.

Valery retained just enough awareness to feel the loss of the warm body between his thighs, before he felt his clothing being tugged off, his body arranged, and his cock tenderly wiped with a wet cloth. Boris slid the glasses from his face and placed them gently on the bedside table.

“Get some rest, Valera,” he mumbled against Valery’s lips, before giving his cheek a final, brief caress and sliding out of the room.

In the morning Valery would feel the emptiness of his bed acutely, and later that week he would eagerly reciprocate, insecurity at his own lack of experience be damned. And eventually he would perhaps find the boldness to ask Boris to take him. But for now, all he could do was slip into an exhausted, blissed out sleep with a small smile playing around the edge of his mouth. 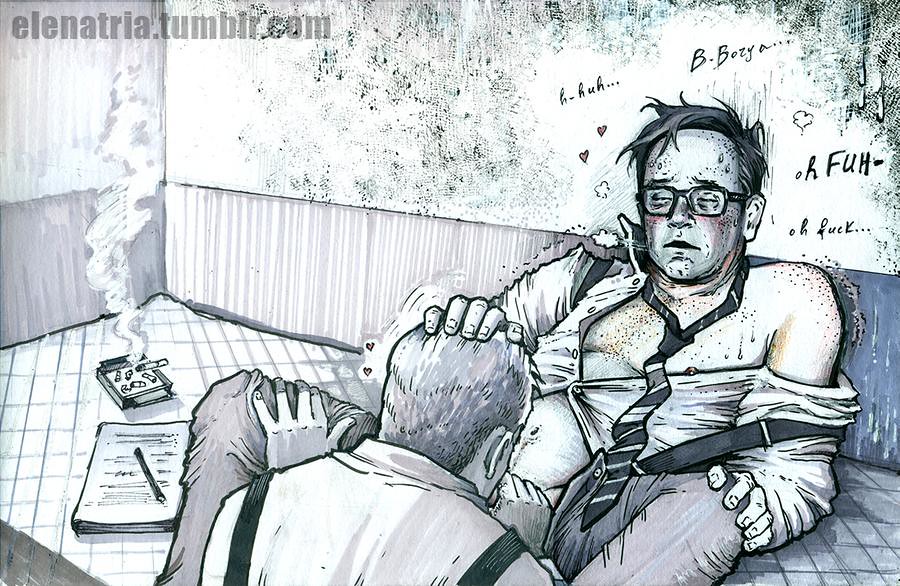