Vulcan's do not dream. This is a known fact.

Then why does Spock dream of the stars, the ship that sails among them, and the crew aboard her?

My contribution to the 2019 Star Trek Reverse Big Bang!

Art by the lovely thrive-in-silence can be found here. 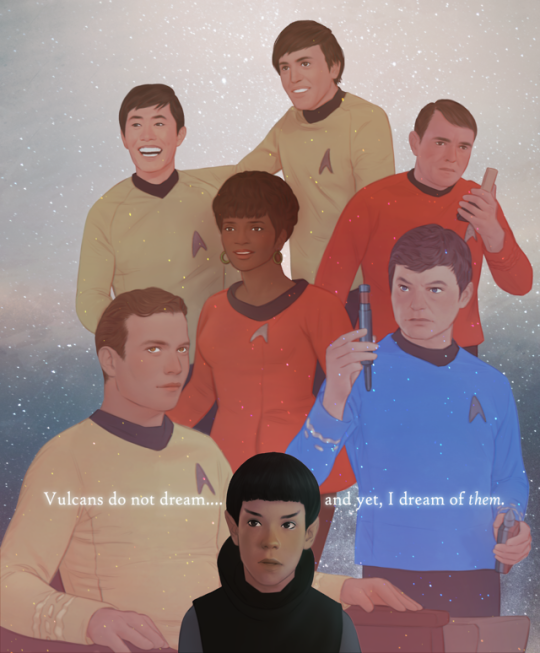 The growl of a Le-Matya is not far behind him, but Spock knows better than to look back. The moment that it would take for him to properly gauge the distance between the predator and himself (the prey) would be a moment too long. For le-matyas are fast, and they are smart, and this one is hungry.

Spock’s only hope at survival is the chance that this one is hungry enough to tire quickly.

By the way that the sounds of snarling and scuffed sand are drawing closer to his heels, the hope is slim.

There doesn’t seem to be a way out that Spock can see, and he doesn’t have the energy to think of one. All he knows now is the pounding of his feet against the sand, the sharp drag of cold desert night air in his lungs.

Suddenly, the cadence of his run is cut, one traitorous foot catching on a rock below the surface of the sand. The world tilts, he goes sprawling onto the ground with enough speed that the sand scraps the palms of his hands. Spock ends up laying on his back, the wind knocked out of him, and the exhaustion in his limbs is so much he fears that he cannot stand again.

He is only seven years old, and he does not know much. But he knows that he does not want to die.

He forces his shaking body (a mixture of pain, exhaustion, and adrenaline pushing his muscles to near disobedience) up onto his arms into a nearly sitting position.

And there, against the star-speckled inky black of the Vulcan night, is the le-matya. It’s eyes glint in almost satisfactory gloating as it sees it’s prey flat on his back, muscles rippling under it’s green skin as it stalks forward, no longer bothering to run. It bares its teeth, mere feet away, and Spock knows without doubt that this is the end.

He only has time to hope, illogically, that it doesn’t hurt too much.

With a roar, a shadow passes over him, momentarily blackening the stars as a dark form crashes into the beast. The two animals writhe together, clawing and biting and-

Spock’s sehlat, old and gentle, followed him into the desert. And now he’s going to save his life.

With a whimper the le-matya breaks free of I-Chaya and darts into the night, to lick its wounds before it goes in search of its next meal.

“Spock, are you injured?” Selek crouches down in front of him.

He does not have time to wait for his cousin’s reply, for I-Chaya chooses then to limp over to the both of them and collapse. The sehlat whines, rests his head in Spock’s lap, and goes quiet with laboured breaths.

Very un-Vulcan like sadness enters his cousins eyes. It reminds Spock of his mother. “The poison of the le-matya. He isn’t going to make it.”

It’s too much. The fear, the exhaustion. The way shock is wearing off coupled with the realization that due to his own foolish need to prove himself, his best friend is about to die. All of it is simply overwhelming.

Spock wakes in his own bed, the soft light of dawn shifting in through the window. There’s a moments pause where he tries to connect the events of the night before, and then it all comes rushing back. The desert, the le-matya, Selek.

Tears begin to well in his eyes, but he wills them away. It is not logical to cry. Vulcans do not cry. But lying there in his bed leaves him with nothing to do but wallow in the loss of his friend, so he rises.

He finds his cousin Selek in the courtyard.

Selek’s eyes go soft in a rather non-Vulcan manner. “Do you remember what happened after?”

“I carried you, you had collapsed.” Selek nearly frowns. “Spock, it is important that you understand what happened last night was not your fault.”

“But I ran off. If I-Chaya hadn’t followed me-”


“You would be dead.” Selek lays a hand on Spock’s shoulder. “Mourn him, but do not blame yourself. Kaiidth. ”

Spock nods. “I understand. Are you staying?”

“No, I must continue on. I have already said farewell to your parents.” He draws back. “Live long and prosper Spock.”

With Selek gone, life returns to normal. Or as close to normal as it can be without I-Chaya. But the sun still rises, his parents go to work, and Spock goes to school. His ordeal in the desert seems to have been forgotten, though his mother does fret over his well-being a little more than normal.

It’s when things start feeling as they should that everything gets turned upside down. Five days after Selek leaves, for the first time in his life, Spock has a dream.

An older Vulcan lays in a biobed, in an otherwise empty room. The room itself is sterile, most likely a hospital. But something about it is off. The room is too cold, the walls completely bare except for those with medical equipment upon them.

There are no windows.

Spock has never been in a room like this in his life. But there is something familiar here, just under the surface, if only he could figure out what it is.

And then it hits him. The Vulcan in the bed is Sarek, his father. Older than he should be, slight gray in his hair, but Sarek nonetheless. He looks pale, tired somehow, even while sleeping.

Cautiously, fearing that any wrong move will shatter the illusion before him, Spock walks over to the bed. Above it is a screen, reading out vital signs and blood oxygenation and a whole lot of other technical data that he doesn’t even begin to understand.

But he understands enough to know that his father is dying.

“Spock.” A soft call from behind him. His mother’s voice.

Perhaps she will have some answers, some logic to apply to the current insanity.

He turns to face her, and the scene goes black.

He opens his eyes. He is in his bed in his room. Nothing has changed since last night other than the rising of the sun.

Trying not to show how rattled he is, he sits up. “Yes, mother?”

Is he? Spock is unsure. But he knows that whatever just happened to his mind, it would cause his mother (human and emotional) distress. And he’s already put her through so much these past days.