Shinji Ikari and the Methods of Bioterrorism

Shinji comes to terms with being a trans girl and confronts the social and systemic forces that stand in her way. Her exploration of queerness influences the other kids to analyze their own identities, and in the process, Shinji, Rei, and Kaworu develop feelings for each other.

This fic draws themes from the essay collection "Neoreaction: a Basilisk," which digs deep into the philosophical underpinnings of the modern radical right and proposes some values that can help a person inoculate themselves and their communities from their influence

Chapter 1: I Thought There Was a Monster in the Woods, But it Turns Out it was Just This Weird Girl Who Plays the Cello 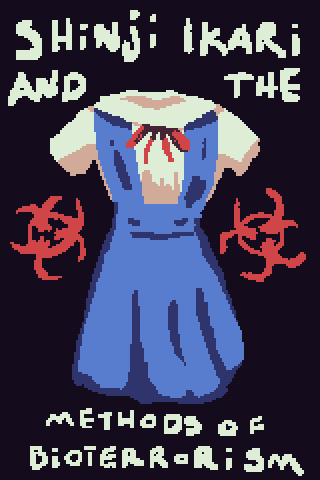 “Sheisse!” Asuka yelled, as she threw a die across Misato’s dining table at Shinji’s head. He ducked swiftly, and the die ricocheted off an empty beer can on the other side of the room. “Why didn’t you heal me last turn?! I fucking told you, you moron, I told you I was low on health, and now I’m fucking dead!”

Shinji didn’t say anything. He’d long since learned that the best way to ride out one of Asuka’s tirades was to try and bite his tongue as long as he could and hope she got bored.

Kensuke sheepishly looked up over the peeling, worn DM screen in front of him. “Uh... how about we call it here for tonight?”

Asuka glared at Kensuke. “How about you actually balance your encounters for once next time, huh?”

“Hey man,” Kensuke began, “you should’ve known that the fouchard was useless for that engagement. Obviously, a lucerne would’ve been a better choice because-”

Asuka rolled her eyes dramatically. “Nobody but you bothers to read all those tables, Kensuke , come on.”

Kensuke leaned back in his chair and folded his arms. “If you can’t appreciate the intricacies of historical european martial arts, I don’t know why you’re even playing at all.”

“I’m playing because you said we’d be fighting dragons and finding treasure, but instead we got this... boring military shit” Asuka gestured vaguely at the cluster of hand painted miniatures strewn about on the whiteboard that served as their map. “Isn’t that right, Shinji?”

Shinji flinched. The entire campaign had gone like this in the weeks since Asuka joined. But since Toji left town, and neither of them really knew anyone else well enough to invite them, it was either this or give up the campaign entirely. A session would start, and Asuka would apologise for blowing her stack over something last time, they’d play uneventfully for an hour or two, and then she’d get pissed and the session was over. Rinse, repeat.

Apparently dissatisfied with Shinji’s silence, Asuka continued. “Come on, say something, ya oaf. Be a man, stand up for yourself, god damn!”

Kensuke began carefully packing up the miniatures and wiped down the whiteboard.

Shinji sighed. Despite himself, he responded, “I think it’s fun.”

“Why would I be surprised?” Asuka exclaimed, throwing her hands up in the air, “Shinji Ikari, the most boring boy in the world, likes playing a stupid game where he gets to be exactly as useless as he is in real life! Boy, I sure feel great knowing that my life might be in your idiot hands when you can’t even fight well in a fucking fantasy world!”

Kensuke spoke up. “Well actually, since his character is a bard, she’s really not cut out for direct combat at all. She’s more of a support caster.” He slipped his old, worn player handbook into his backpack.

“You know what I mean.” Asuka said, shooting him a dirty look. “If he can’t even heal his only teammate, ya know, the one who can actually hit things, then he’s useless.”

“Whatever, man,” Kensuke said, hefting his backpack over his shoulder, “Are we on for next week?”

“I guess so?” Shinji replied.

“Cool. Welp, try not to kill each other before then.” Kensuke hastily waved goodbye and left the apartment.

Shinji and Asuka sat in dejected silence for what felt like an eternity.

“Why do you play a girl character anyway? It’s weird.” Asuka said, adding a frightful venom to that last word.

Shinji shrugged. To be honest, it wasn’t something he could really explain himself. It just felt more natural. “I dunno. Why’s it matter?”

Asuka shrugged back. “Because it’s weird. Normal boys play boy characters. They don’t pretend to be girls and dance around like fairies.”

“Guess I’m not a normal boy, then,” Shinji mumbled.

“Where are you going?” asked Shinji, reflexively.

“Out. With Hikari. There’s a movie we’re gonna see.”

This was great. With Asuka going “out,” and Misato at work ‘til god knows when, Shinji was going to have the house to himself for probably at least a couple hours. For someone as easily socially overstimulated as him, that was a godsend. But also...

There were some other things Shinji had been meaning to do

“Anyway,” Asuka continued, as she walked back to her room, “I’m sure you’re jealous of all the attention Hikari’s getting, but try not to cry about it too much, okay?”

I’m sure I’ll live , he thought to himself.

Shinji stood at the threshold to Asuka’s room. He absentmindedly clenched and relaxed his fist as he tried to build up the courage to enter. He knew Asuka would be pissed if she found out, that was for sure. But it’s not like Asuka was ever starving for excuses to get performatively worked up at him. Yesterday it was because he drained the bath before she could use it. Today, she blamed him when she rolled three critical failures in a row.

Still, he had a weird sense that some unseen eye was watching and judging him for even thinking of this.

He tried to push the shame away as best he could as he slid open the door and entered her room. Eva pilots, it seemed, were not much for interior decorating. The walls were bare, save for a faded Rammstein poster and a coat hanger that held her school uniform. Clothes were piled haphazardly on top of her dresser and her bed. A Pizza box from a place that went out of business a month ago sat in the corner next to her trash can.

Shinji fixated on the school uniform. He carefully removed it from its hanger and held it out in front of himself. Though Asuka was a bit taller than he was, it certainly seemed like it would fit. He poked his head out into the hallway to make sure he still had the house to himself. The place was silent as a crypt. He folded the uniform over his arm, darted over to his room and quickly shut the door behind him.

He undressed and tossed his own uniform on the bed, before slipping into Asuka’s. Looking down at himself, what he saw was at once strange and familiar, like the sensation of walking across a schoolyard at night. Seeing one’s own body, but as a girl. She turned her hips back and forth and the spinning motion flared the skirt out to the sides. There were butterflies in her stomach, from both the exhilaration of breaking a taboo, and the rightness she felt in doing so. She couldn’t help but smile, for the first time in ages.

It occurred to her to see what she looked like in the mirror. She peered out into the living room again. Still no signs of life. She sped through the kitchen into the bathroom. Shinji switched on the vanity light and took in the view of the strange girl that was herself looking back at her, grinning ear to ear.

Another thought struck her. Misato kept her makeup here, right? She checked the medicine cabinet and pulled out a penguin-patterned bag. Most of its contents were confounding to her, just a jumble of plastic cases that held mysterious powders, worn down to the edges through years of use. She recognized a few lipstick tubes and examined them. The tips were broken off two of them, but the last one seemed intact. She twisted the bottom and held it up to her mouth. Was this really alright? The feeling of being judged grew stronger and the hair on the back of her neck pricked up. She looked around again to make sure she really was alone before methodically filling in the shape of her lips with the wine-red lipstick. Observing herself in the mirror, she thought she looked pretty cute.

The thrill of experimenting with this new idea of her self was overpowering. Is there anything else I could borrow? She thought to herself for a moment. Asuka’s kneesocks always seemed pretty nifty. As long as she was going off the deep end here, what was the harm in trying them on too?

As she crossed the kitchen again, she heard the sound of the hall light switch being flipped, and wheeled around in a panic. Misato stood in the entryway. They locked eyes, and Shinji froze.

The poster in Asuka's room is specifically this one