MANGA SPOILERS ALERT
Expanding on the adorable egg shopping kyoru moment from the manga, we follow Kyo and Tohru as they prepare to spend a domestic day together. Basically fluff with some sprinkles of angst and slow burn.

Among the list of things that have recently become almost too difficult for him to bear, he will have to add going to the supermarket to buy eggs with Tohru. Despite his initial derision at her suggestion that this is what they do with their day off, it takes all that is within him to not smile like a fool as he watches her gather her things. She goes to her room for her purse and comes back holding her school bag instead and blushes when he points it out. “Silly me…” She runs back upstairs with that soft knowing smile on her face, and Kyo sighs in to the palm of his hand. The effect she has on him is too much. He wants her all at once, wants her smiles and her presence next to him, wants to spend all his days with her. On the other hand, wishing so means he was in a constant state of eternal damnation, knowing what awaited him in the barren future. Still, the hours he spent with her were precious, and he needs to soak it all up before it is too late. He could damn himself later. For now, he could think of little else but needing to be by her side. He recalls the way her shoulders shook as he held her last night, her quiet sniffles, the wetness on her face next to his own that he felt so briefly before he had changed. For now, he knew that she needed him as much as he wanted to be with her.

“You know, you can at least pretend you’re not miserable, Kyo-kun,” a sly voice says from behind him. The remark belongs to Shigure’s bespectacled floating head that was peaking at him from behind the study door.

“I’m not miserable. And mind your own business, old man,” he grumbles, caught off guard.

“Whatever you say Kyo-kun, just remember— the summer of love is fleeting. Better not let it go to wa-!” The rest of his remark is cut short as Kyo aims a cushion at his face.

They hear light footsteps coming down the stairs and the door shuts on Shigure’s crying face. Tohru comes bounding in with a small blue purse strung across her torso, her hair tied up in a neat pony tail.

“Was that Shigure-san? Did he want us to bring something for him from the store?” she says as she puts on her shoes by the door.

“Er, no he doesn’t want anything,” mumbles Kyo before getting up. He walks towards her and sits at her feet to put on his shoes.

Tohru’s checking her list of groceries out loud. “We must get eggs, and I think we are nearly out of milk too, so there’s milk, ah and of course we need to pick up some ingredients for dinner now that we are going. Yuki-kun mentioned we are out of toothpaste this morning too… What would you like for dinner Kyo-kun?” He feels a gentle hand on top of his head graze through his hair as Tohru moves past him and stands in the entrance. He closes his eyes.

He looks up, face heated, realizing he was hardly listening.

“What would you like for dinner Kyo-kun?” she repeats herself, and he detects a soft blush on her pale cheeks. He has the urge to reach across and cup her face and pull her to him. DRAT NOT THOSE PERVY OLD MAN THOUGHTS AGAIN! He shakes himself.

“Oh uh, we’ll just grab whatever you feel like making… and maybe some stuff for pancakes for tomorrow,” Kyo finishes as he stand up and walks up to her.

Tohru looks brightly up at him and like always, he has to look away because looking at Tohru is like looking into the sun. It is warm and radiant, but he can’t meet it head on. He sighs, brows furrowed.

“I’m so glad to have today with you, Kyo-kun,” she murmurs.

He can’t help himself. He raises his eyes and looks at her softly, and she blushing a deep red now, her earnest eyes brimming with unapologetic happiness. A part of his heart sings. They are standing close to each other, like the evening before when she spoke to him about her Father, when he had held her by her shoulders for longer than he could bear before finally grasping her close to him. His palms and cheeks burned at the memory of her hair flying across his face, her nose nuzzling his neck through the sheet between them. Their eyes met and both seem to be thinking the same thought. He hears her sharp intake of breath. He blinks and she look down immediately. Kyo’s throat suddenly feels too dry.

“Well, let’s get going then!” he stammers and heads out the door. 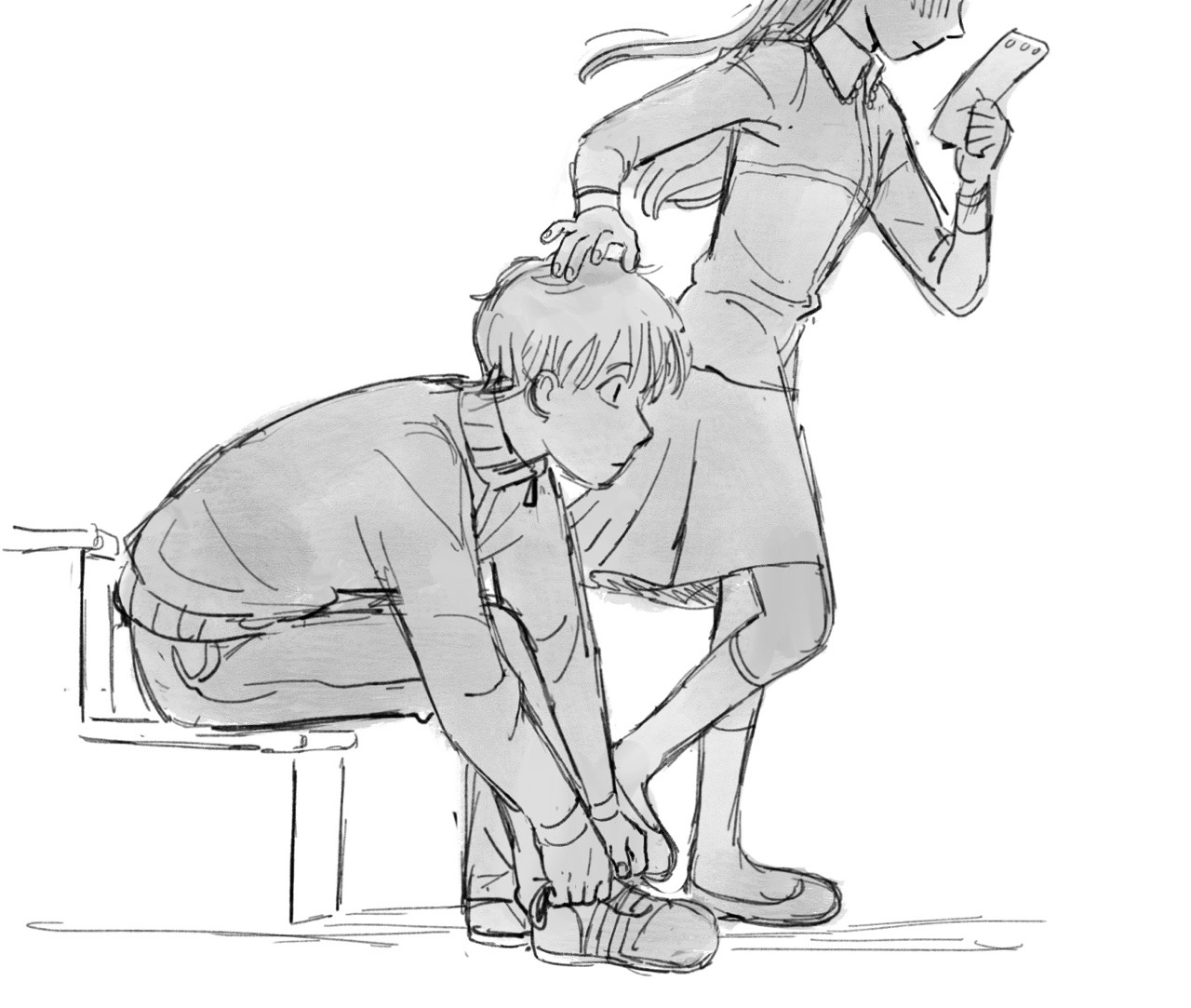 Kyo scans the aisles, turns left and right but she is no where to be found. Panic takes the form of a lump in his throat but she’s got to be here somewhere, she can’t be lost lost. He scans the aisles for her, eyes hoping to catch a glimpse of pink ribbons fluttering in brown hair. What did they have to buy again? Milk? Vegetables? Or maybe she is in the condiments aisle—

He feels a gentle tug on his sleeve and looks down to see a small hand, his eyes following up the arm and finding a familiar smiling face. Relief washes over him and he is momentarily jarred by how quickly his heart reacts to her presence, jumping up before calmly settling down, as if her presence was the balm it needed. Her hand is still holding his sleeve while the other clutches a little basket holding a container of a dozen eggs. He raised his fist and gently bops her head. “You didn’t lose me, dummy. But let’s stay close, okay?”

The small hand that was gripping his sleeve is now in his own. Their fingers are tangled, palms warm. The trusting smile she gives him obliterates all coherent thought from his mind. “Okay! Let’s stay close,” she repeats. Her hand squeezes his reassuringly.

Kyo closes his eyes and sighs, feeling a surge of heat creep up his neck. Without looking at her, he takes her basket and tugs her forward down the aisle. “So what else have you got on that list of yours?”

Aaa so here it is, my first (and if you guys think it is not awful, then hopefully not last) little kyoru fic. Prompted by @dontlookatmepwease and @palamig
That beautiful kyoru sketch belongs to @dontlookatmepwease on tumblr, who is an amazing artist and has rendered us some lovely kyoru moments and I was ever so touched when she not only gave me a prompt but also then produced this image of perfection.