A Narrative of Certain Events following the Ending of the World (Except Not Quite), as vaguely hinted at in The Slapdash and Not Very Helpful Prophetic Tidbit of Agnes Nutter, Witch (And Matchmaker.)

"Their lives are in horrible, terrible danger that only we can save them from!" Anathema held up the Prophetic Tidbit. "It says so. Right here."
Madame Tracy peered at the page.
Raised a meaningful eyebrow.
"Dearie, as a woman of, well, considerable experience, I really don't think that's what 'the lyttle Deathe' means in this context..."

(Or, alternatively: Eight - give or take - matchmakers trying really, really hard, honest; two clueless ethereal/occult beings mutually pining their endless days away; and one witch, who can't leave well enough alone when it comes to matters of the heart, no matter how many centuries ago she died.)

Hello Good Omens fandom! I have a feeling it's going to be wild in here for a while...

This story is meant as a bit of a post-canon thing after the book, and, since it was started before watching the TV show (or, indeed, knowing of its existence) won't draw overly much from that.
I might adjust later chapters if there's any major canon divergences that suit my purposes, but the illustrations are all roughly how I imagined the characters prior to seeing images from the series.

That said, do enjoy, Esteemed Reader, and feel free to fangirl/-boy/-person with me in the comments!

EDIT: The wonderful GlassyTheRosePen has made a Spotify playlist out of all the Queen songs mentioned in this fic! Check it out here! 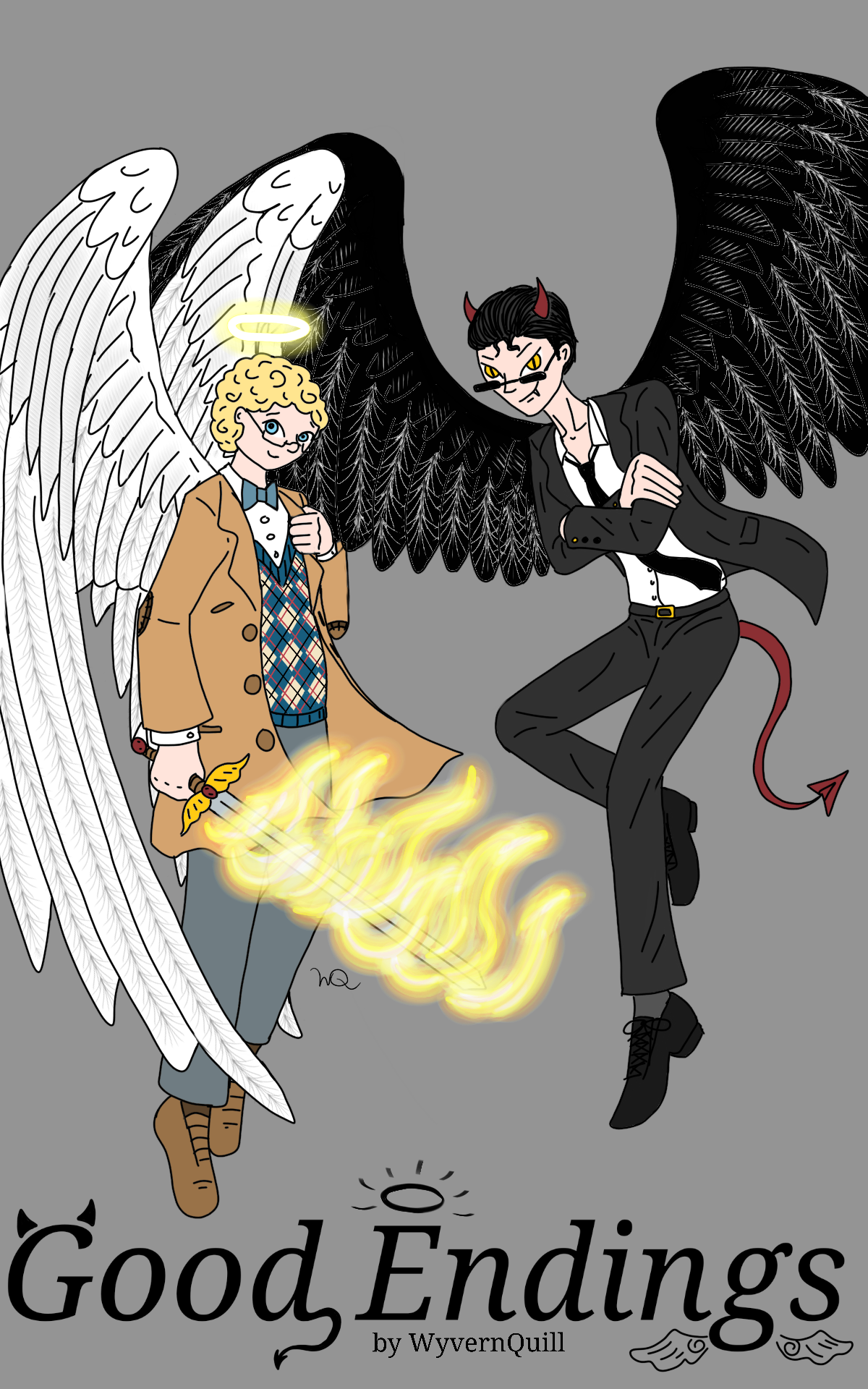 A lot has been written about the day the world almost-but-not-quite-nearly-oh-bugger-all-missed-your-chance ended.

How an Angel and a Demon stood ready to fend off Lucifer himself, how the Antichrist chose humanity*, and three little rascals defeated three rather scary horsepersons.

*to the dismay of Heaven, Hell, and Satan Himself, who would spend the following few years in the Pit, wailing about what in Creation he had done wrong to not even get joint custody.

How a Professional Descendant and a Witchfinder Private managed to destroy some electronics with the strong intent to fix it, how a Medium flew a little motor scooter all the way to Lower Tadfield, and a Witchfinder Sergeant was very lucky indeed to have missed his shot at Beelzebub.

It's a grand tale indeed, but much less has been noted down regarding the evening following immediately thereafter:

How Shadwell stayed up half of it, gulping down condensed milk and muttering about 'painted Jezebels' with a wistful quality to his voice;

How Madame Tracy laid her savings out on the kitchen table, and thought 'why yes, enough for two, I should think' with a soft smile;

How Newt and Anathema proved Agnes and legions of encouraging comments in the margins wrong by doing it again, and then once more for good measure, until they fell asleep curled around each other and happier than they'd been in a long time, even if Anathema slightly mourned the absence of prophecies in her further life;

How Pepper, Wensleydale and Brian placed the sword, the scales and the crown respectively on their nightstands, and dreamed about the things they liked best (without any angelic interference needed, even);

How Adam was sent to bed early and without dessert,* but didn't actually mind terribly much, because it would've been leftover grapefruit pudding and he would've sneakily fed that to Dog anyway;

*A boy needed supper, even if he had misbehaved, Mr. Young believed.

And, finally, how Aziraphale said "oh, it's all burned down, isn't it" just as they left the M25, sounding as lost as a puppy tied to a tree in the woods, right when the realisation hits that its owners aren't going to come back and pick it up again, after all.

"Er. Yeah." Crowley, for his part, still had the Bentley's ignition keys (or the clumps of half-melted metal they had become) in his pocket, and had been planning to have a similar breakdown over them later, the reminder of which now rather choked him up.

In some possible universe,* he'd probably left them behind with the rest of the ruined Bentley, and instead of being painfully reminded, was free to invite Aziraphale over to stay with him.

*His existence as an Occult Being didn't mean Crowley couldn't appreciate the genius inherent in the many-worlds-interpretation, did it?

He might've made a weak quip about the congealing Duke of Hell by the door, sat the angel down on his couch, made him a strong - read: brandy-infused - cup of cocoa, and then willed up some 15th century religious texts he could cuddle in his sleep.

Certainly, Aziraphale would've known they weren't real, still refused to potentially damage them, "and you know, my dear boy, I'm not much for sleeping anyway", but Crowley would've made the effort, and Aziraphale would've appreciated it, and perhaps, perhaps...

But that was rather inconsequential, since in this universe, Crowley took the blessed - excuse his French - keys and therefore failed to extend this hypothetical invitation in time; so Aziraphale, still eerily resembling a dejected infant animal, muttered "better take a hotel room, then" and requested to be let out at the next intersection.

"You could- that is, at my-" Crowley tried feebly, but just like with the Apocalypse, the moment had passed, and choices had been made and set in stone.

"No, no, it's quite alright." Aziraphale waved him off. "I'll find myself a new place tomorrow, it's just for this night. But thank you, my dear, it's very good of you to offer."

Good indeed. Crowley thought with a sigh, and obligingly let him out at the intersection.

And if, afterwards, the car felt very cold and lonely all of a sudden, then Crowley blamed it on a) it not being a Bentley, and b) the absence of Queenterpretations of classical music he associated so heavily with driving.

Nothing to do with Aziraphale at all, he listlessly tried to convince himself.

Demons mustn't feel that way about angels, after all.

It was a far cry from his lovely Buggre Alle This edition, but one made do if one had lost all of one's treasured books in one fell swoop.

Tomorrow morning, he would go and see if even a scrap of paper had survived the flames, however unlikely, and then... then... meet with Crowley.

Part of him wanted to beg the demon for asylum in his flat the next day, wanted to do so right now in fact, but he forced it down.

Honestly, there had been a time when he'd been perfectly content without Crowley for centuries at a time*, and now, he couldn't stand to be alone for a few days?

*Only checking up on him on a few rare occasions. Watching him sleep in the 19th century had been particularly endearing.

No, no, he had to be weaned before it was too late. Now that the Antichrist business was over and done with, they had little reason to speak so frequently, no doubt Crowley would tell him so himself tomorrow.

And, really, Aziraphale told himself firmly, taking another swig, angels shouldn't be feeling that way about demons.

Shouldn't feel that way at all.

So much for that evening.

The next day has, for the most part, been detailed most excellently by the Honoured Sirs Pratchett and Gaiman, and therefore requires not nearly as much retelling. We refer the Confused Reader to their account of events, and carry on without them.

Hope you enjoyed this prologue while waiting for the episodes to come out - are you excited? I'm excited!!!!! - and I'll put the next chapter up tomorrow, after that there will probably be more time between updates.