Tyler was kidnapped by the dashing Swede pirate, he should have known better than to stray from his own captain. Now he sits shackled in this box awaiting the ravaging to come.

This whole scene ended up being set on this picture: 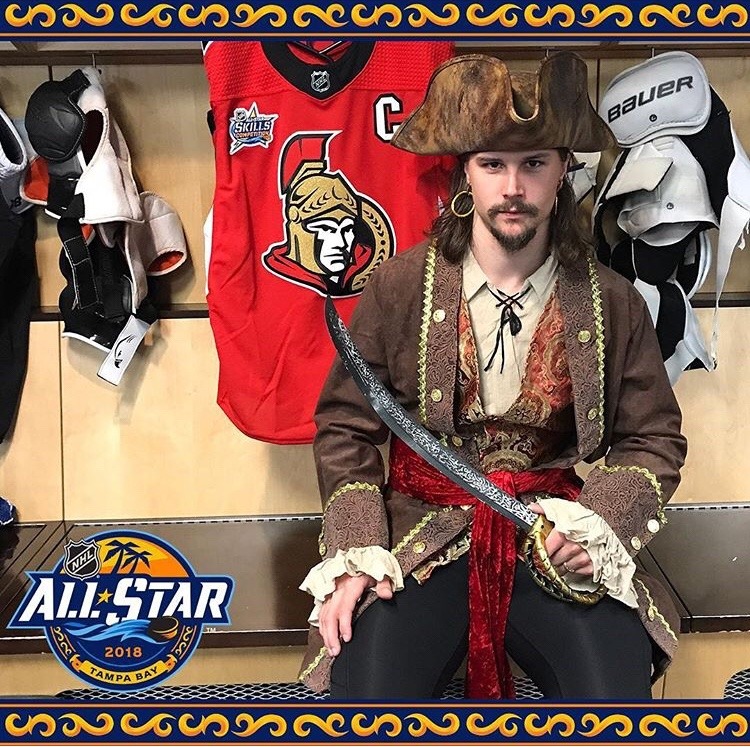 As for Jamie and Tyler: 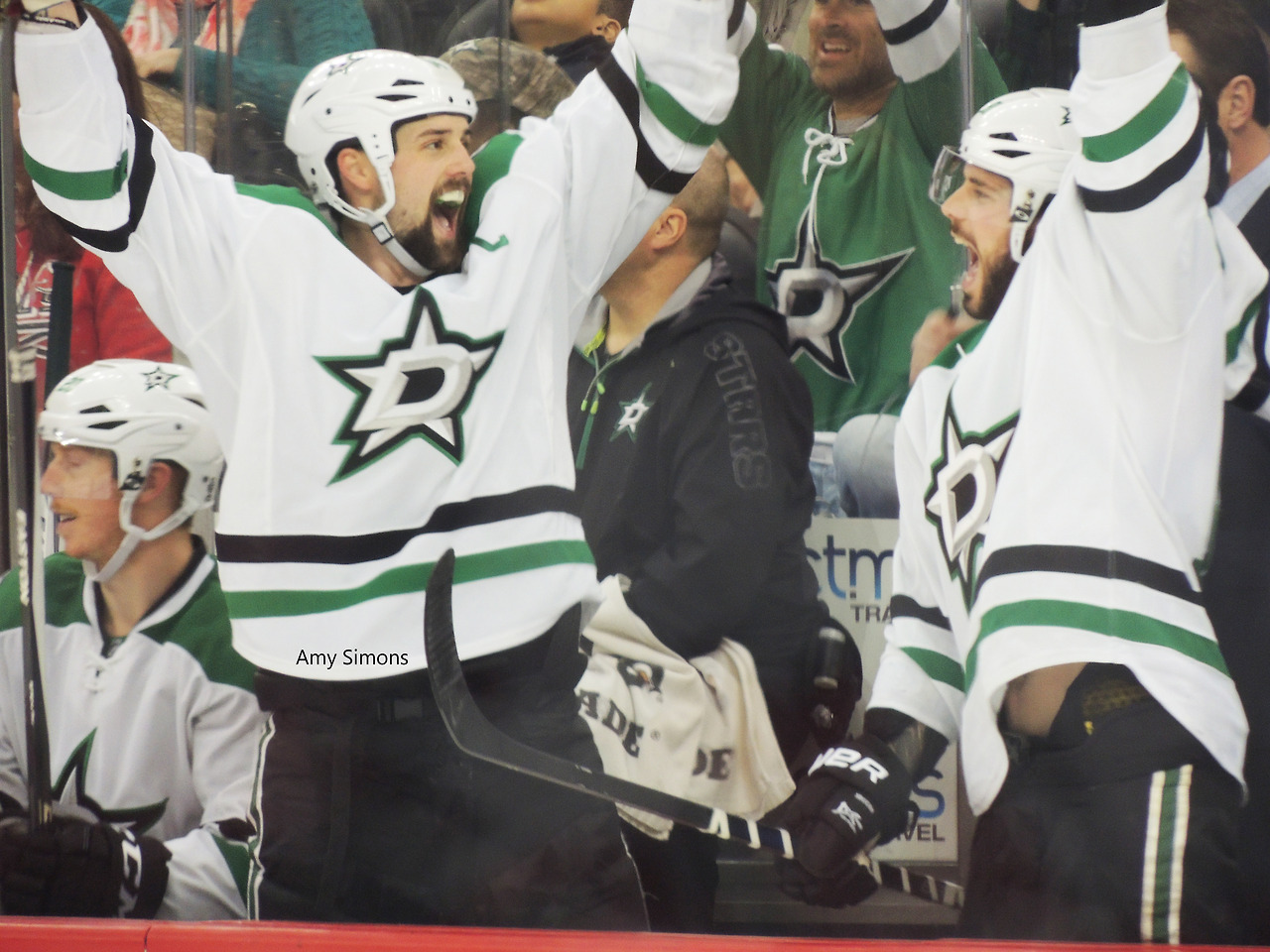 As always this is fiction, just like Jamie being able to fence.

Lastly, this was something someone asked for in a comment. If ever you get a prompt out of one of these parts, leave a comment and it might happen.

Tyler couldn’t believe it, all the scoring was his for the Stars this game.  Until Ottawa had to spoil all the fun in the second and third. When he tied it up in the third he was elated to be able to send the game to overtime.

Three minutes later, the game is over at the hands of Karlsson.  “See you in 20 at the player’s entrance,” Erik whispers in Tyler’s ear after Jamie had headed to the locker room.

Erik pulls off his glove and grabs out a piece of paper, “For Jamie’s stall.”  Erik gives Tyler a wink and skates back to the Sens locker room to change.

Tyler sees Jamie is still in the shower after he quickly changes.  With the exception of Spezz who is out of the room, Tyler’s informed the team that he’s being “kidnapped”, and the ransom note is part of the gag.

About 15 minutes after the game a confused Spezz walks back from the equipment room passing Tyler pointing at a costumed Erik at the end of the hall “When did Jack Sparrow get here?  This your prey tonight Ty?” He asks pointing at Tyler, Tyler flashes a cheesy grin.

“I knew it, pay up Raddy!” Spezz chirps.

“You guys have taken to betting on our hunts now?” Tyler says indignantly.

“You’ve been betting your asses, I prefer cash and Raddy owes me some,” Jason exclaims running after Radulov to collect his money who is playing hard to get around the logo on the floor.

“Erik is jokingly kidnapping me in that outfit, so make sure to act the part when Jameson gets out of the shower,” Tyler advises.

“I’ll make it an Emmy-worthy performance,” Spezz singsongs.  Tyler giggles quietly to himself as he dashes off to his “kidnapping."

Your first mate has been kidnapped and is now my captive.  He is now shackled in the jail at a nearby rink that shares the name of a city with an orange bridge.  If you don’t come and defend his honour in one hour, he’ll be my captive forever.

Tyler and Erik make it to Frisco and enter the unlock door.  Tyler changes into his costume as Erik straps on skates and heads off to the rink and starts slicing up the fresh sheet of ice.

“In the klink,” Erik orders holding a pair of medieval cuffs.  “Look scornful when Jamie shows up. I want him to fight for you!”  Erik clamps on the iron shackles and holds Tyler’s chin between his thumb and forefinger, pulling his cheek in for a loud smacking kiss. Tyler attempts the face but ends up smiling and pulling Erik in for a quick kiss on the lips before putting on his cuffs.

It’s a few minutes later they hear a door opening, which echoes in the silence of the building. A large, slightly confused, but curious looking Jamie enters.

“You don’t look much like a captain,” Erik chirps at Jamie.

“I, uh…” Jamie stumbles out then looks over at the penalty box where Tyler gives off the puppy dog eyes in his costume. “Oh!” Jamie yells putting the pieces together. Erik smiles and points to the locker room.

“I’m just gonna fix my character then,” Jamie trails off to where Erik is pointing.

“See that you do CAPTAIN ,” Erik exhales with a smirk.

Jamie finds his pirate captain costume Tyler had left for him and changes into it and the pair of his skates that were brought over there too and he makes his way quickly back onto the ice, trying to get into a character of a pirate about to fight to save his lover and first mate.  Erik quickly approaches him.

“Tyler!” Jamie screams beyond Erik, who then holds him back from going to his beloved.

“I challenge you to a duel,” Erik slaps Jamie with a leather glove.  Jamie balls a fist releases it and then smacks Erik in the face.

“Draw your sword captain,” Erik orders, a hand to the sword attached to his costume.

Jamie laughs, “Did you accidentally get traded to Vegas already and didn’t tell anyone?”

“Captain Benn, do you want me to run your boyfriend through?” Erik says seriously.

“Only if it’s with your dick, he’d love that!” Jamie comments, Tyler grins and nods his head eagerly.

Jamie turns red, obviously liking this scene in front of him a lot. “Erik draw your weapon!”

Erik draws a sword from its holster, Jamie follows suit.  They may be plastic but better safe than sorry. They skate around Erik playing hard to get when Jamie catches up and starts to fence with the other captain.  Erik slips and falls, Jamie points the sword at Erik’s neck, “Unshackle my boyfriend or I’ll run you through.”

“I have a better idea, let’s just leave him shackled.  I’ll let you have first dibs,” Erik compromises with the devilish smile he’s known for. Jamie glares a bit more before his face brightening with a smile.

“Deal,” Jamie agrees, skating over to the penalty box while Erik skates across the ice to grab the bag of supplies they need to complete Tyler’s punishments.

Jamie licks his lips to moisten them as they had dried-out during the fight, then one more time seductively at the sexy sight Tyler shackled in the penalty box with the sweet, innocent look that he pulls off so well.  Jamie knows that there’s a naughty and raunchy side that comes out once the fabric covering his chiseled body is removed.

Erik enters the box with the items, setting them next to Tyler and undoes the fly of his trousers pulling out his flaccid cock and his full, meaty set of balls.  “Get me hard, prisoner.” Erik orders to Tyler. Tyler scoots off the bench still fully clothed and shackled and walks on his knees across the hard rubber floor to the waiting captain.

Jamie slides into the box massaging his cock preparing it for insertion into Tyler’s tight hockey heat.  Jamie undoes Tyler’s pants, pulling them and his boxer briefs down to his knees.

Erik closes his eyes and rests his head on the glass behind him panting as Tyler continues his rhythmic work.  Tyler pulls off Erik’s cock when Jamie slides his middle finger into the prisoner’s tight clutches. Tyler mewls at the intrusion and returns his attention to Erik’s cock, moaning and causing shudders of stimulation.

“He, uh, damn that tongue, is doing nicely.  Swabbing, uh, my cock well.” Erik stammers out.

“That is good,” Jamie notes as he inserts a second finger into Tyler’s ass.  Tyler growls on to Erik’s cock. Erik hisses in response followed by a howl.

“Damn Captain Benn, your first mate’s mouth is a sin of the sea.” Erik comments.

“I fear he may be enjoying his punishment Captain Karlsson,” Jamie says with that possessive tone.

“I don’t care if he enjoys it, this is heaven!” Erik grunts with a smile as he re-rests his head and starts moaning and panting.

Jamie undoes the fly of his pants pulling out his thick, throbbing manhood.  He lubes it generously and slides it into Tyler. Tyler’s eyes roll back in his head and his cock swings freely between his legs as he tries to tighten around his husband’s cock.  Jamie makes hissing noises as he works his way into Tyler.

Jamie grabs the hair on the back of Tyler’s head and uses it as leverage to thrust deeply into the punished mate’s ass.  The motion pulls Tyler off Erik’s hard cock causing Erik to whimper as the cold air coming off the ice causes a chill on his saliva wettened dick.

Jamie guides Tyler’s back onto Erik’s cock, using Tyler’s hair to control Tyler’s motions on the other captain’s manhood.  Tyler tries to hum “fuck me” onto Erik’s cock so Jamie will let him be his usual mouthy self, but Jamie continues to force Tyler’s head to fuck Erik’s cock.

Jamie grunts and groans as he impales Tyler with his throbbing cock, hitting Tyler’s prostate with regular precision.  Tyler’s cock throbs and his ass spasms with each strike. Tyler moans with each spasm, artificial stars cross his blackened vision because his eyes are closed while still working the shaft of Erik’s cock.

Jamie’s precision fucking of Tyler’s ass causes Tyler to come without being touched.  The spasms of Tyler’s ass make Jamie’s cock explode as he fucks Tyler through his orgasm.

Jamie cleans up Tyler’s load from the plastic flooring as Tyler flicks his tongue at Erik’s cock head.  Erik’s breath hitches just as Tyler sucks Erik’s shaft back into his mouth to accept his load. Erik holds Tyler’s head on his dick until it’s completely spent.

“That was fun Captain Benn, you’re marrying a hot first mate,” Erik says winking as he tucks himself back into his pants.

“Thanks, Captain Karlsson, still needs some discipline though.” Jamie comments, with a swat to Tyler’s ass.  “Shall we get you back to your quarters for the night?”

Jamie repacks the bag and removes the irons from Tyler.  Tyler rubs his wrists.

“Yeah… after we drop off Erik, can we pick up a pizza stallion?” Tyler asks.

“Whatever you want pup,” Jamie says.

“God you two are so sickeningly sweet,” Erik says as he exits the Land Rover.  Jamie and Tyler smile into a kiss after Erik walks into the hotel.

That's it for the teams, there are two wrap up parts coming. Tyler and Jamie have a party to marry in front of their families even though they did it in private before.

Lastly, someone asked for more Rous/Nik, so we're writing the back story. And it's going to link up with a Capitals WIP I'm working on.