A scene (and accompanying artwork) set between Reprise III and IV. Cody has been shot, and Aola doesn’t know the details. SPOILERS FOR REPRISE IV.

Romance isn’t a strong theme in the Reprise series, so this is more of an extra bit rather than part of the main story. On that note, I’ve never actually written romance, so… I’m so sorry in advance.

May the Forth be with you!

He hadn’t planned on working late. It was hours past noon, and his stomach persisted in rumbling to remind him that he’d worked straight through lunch. The afternoon sky had bloomed into a luxurious sunset that doused his office in fiery gold, as if to tempt him to look up and see how late the day had grown. But the mission reports still weren’t finished, and he knew he wouldn’t have the energy to finish them once he let himself rest.

Unaffected by the dusky sky, he only looked up when there came a knock at the door. He glanced at the chrono and realized that he’d stayed over an hour past the building’s closing. Who on earth was still here, besides him? He blinked, rose, and went to answer the door. His visitor didn’t allow him time to say hello.

“Oh, thank the Force,” Aola Tarkona threw her arms around him, and he stumbled back into his office, damaged prosthetic buckling.

“Aola,” he gasped, eyes wide. While his right hand scrambled for support on his bookshelf, his left wrapped instinctually around the small of her back. “How did you get in here?”

“Cody, you kriffing moron, ” she cut him off, hug immobilizing his neck. “You were shot, that’s all they said. What happened?”

Oh. He hadn’t expected her to hear about it so quickly. “I’m sorry,” He sighed into her. He remained bent under her weight. “The reports are classified. I still have to finish them, can’t exactly talk about it… Aola, could you please let me stand?”

She let him go and watched him struggle, expression cross. He saw the demand in her eyes and sighed.

“Got me twice. Here,” Cody gestured first to his right leg, which was sluggish and hissing from short circuits, and then to his left temple, which sported a nasty, livid gash still sticky from bacta. “And here. Luckily, this one was just a graze.” He gave her a weary grin.

Face drawn in a furious frown, Aola brushed her fingertips feather-light along the edge of the wound. It would scar.

“You’re an idiot,” she accused softly.

“It’s not so bad,” he replied, just as softly, watching her face. He pulled her hand away from his wound and held it. “Hey,” he caught her gaze. “I’m still here.”

The words were a mantra and a kata, an agreement they had with one another. She was a Jedi, who could not know attachment. He was a clone who’d been engineered to to know nothing but battle. They would never own each other, could never take vows for each other, never live for one another or owe each other any more life than they could spare. But so long as they were both still alive, they would be here.

“You scared me,” Aola told him. He chuckled and leaned toward her, close enough that she could feel the warmth of his skin hovering by hers. He brushed his thumb over a scar on her neck, which was still purple-pink and new.

“Well, I have learned from the best,” he whispered. His breath tickled her eyelashes and her nose.

“You’re an idiot. ” She wished she sounded angry, but she was too relieved to hide the tremble in her voice. She grabbed his face and kissed him, digging her fingers into the short crop of his hair. He held onto her hips as she drove them backward across his office.

He’d been gone for a month, and the way they’d talked of him, she’d thought… There wasn’t enough of him to hold onto. She clung to his neck, his back, grasped at his ears and the soft puffs of his hair, desperate to feel the life in him. His mouth was hot against hers, and she couldn’t seem to get enough of it, of him, to blanket the residual fear left gnawing in her belly. He stroked her bare stomach with a thumb and grabbed either side of her waist, pulling her tighter against him.

They broke apart when they bumped into the filing cabinet at the back corner of his office, by the window. The sunset cast his brown skin in beautiful gold, but it was not enough to hide the faint red on his cheeks and ears, the sloppy shine on his lips. He grinned stupidly at her, eyebrows as high on his face as he was on her kiss.

“Didn’t know you cared that much,” he said. “I should get shot more often.”

“I’ll stab you,” she threatened.

“Stabbed again,” she answered immediately, jabbing him in the stomach. His body flinched but he laughed aloud. “And again,” she jabbed him again, and kissed his chin as he continued to laugh. “And again,” his cheek, “and again and again,” she kissed his mouth and lingered there, slow and sure, and he deepened the kiss until they were both melting.

She snuck her arms back around his neck and stood on tip toes to press her whole weight into him. He grabbed her shoulder, held her close, and breathed her in. His right leg buckled and he fell against the filing cabinet. A coffee cup he’d left there earlier that day fell to the ground and shattered, but he couldn't have cared. He stayed exactly where he was and supported his Jedi by handfuls of warm, indigo skin. Still here, his heart beat in a fast and steady tempo, still here. 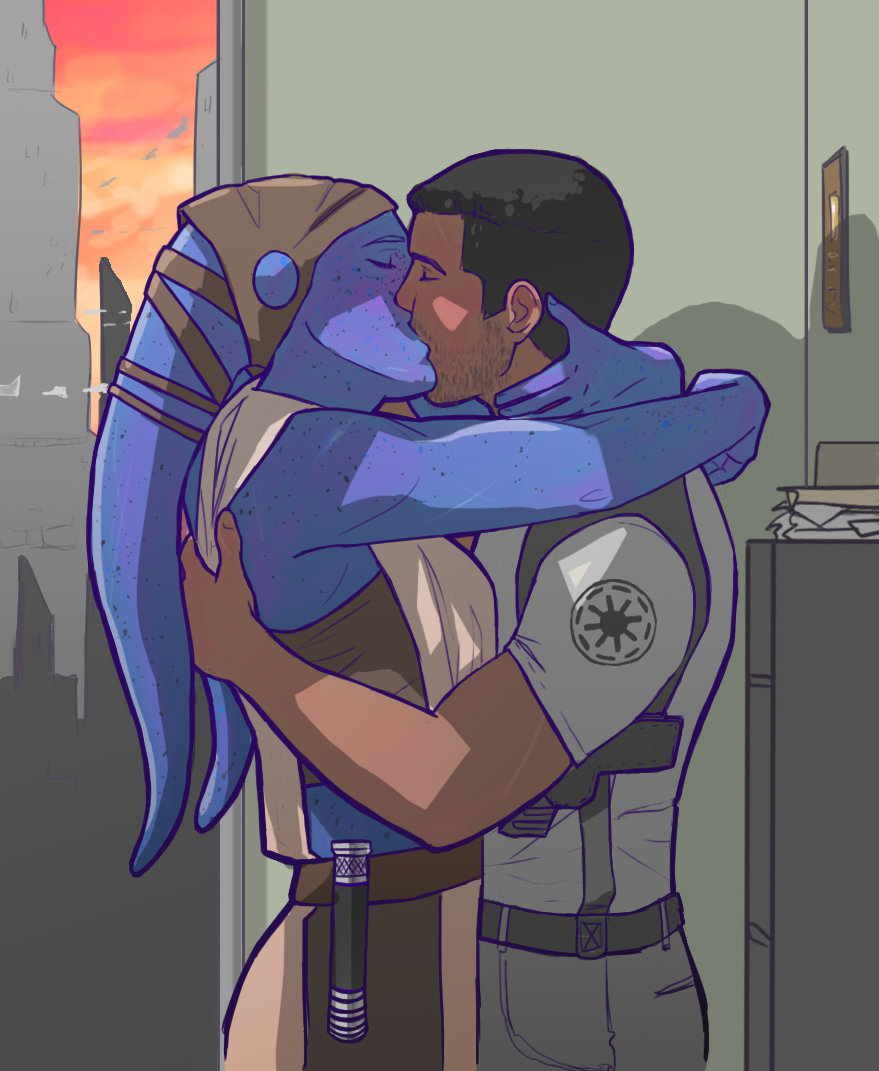