Hitomi Kanetsukabe was ecstatic to find she'd been admitted to UA's hero course.

Her high school life was just beginning, and she'd soon find out she'd be getting more than she bargained for.

This is an OC story, where she is a part of Class 1-A as one additional student!

This is my first work, and is cross-posted to FanFiction.net and Wattpad.

Updates are every Friday, and if I'm able to, every Monday, at 3 PM PDT.

Hello everyone! Welcome to my first ever fanfiction! I'm going to be honest with you right now, I'm definitely not a writer, so I have no idea what I'm actually doing.

I created this OC more than a year ago, and I felt like I would try my hand at writing out her story.

P.S. I'll be drawing images to have at the beginning of each chapter to showcase the outfits that will be worn by my character, as well as scenes from that chapter itself that will be shown at the end.

I hope you enjoy!

(Psst, have some music to listen to!) 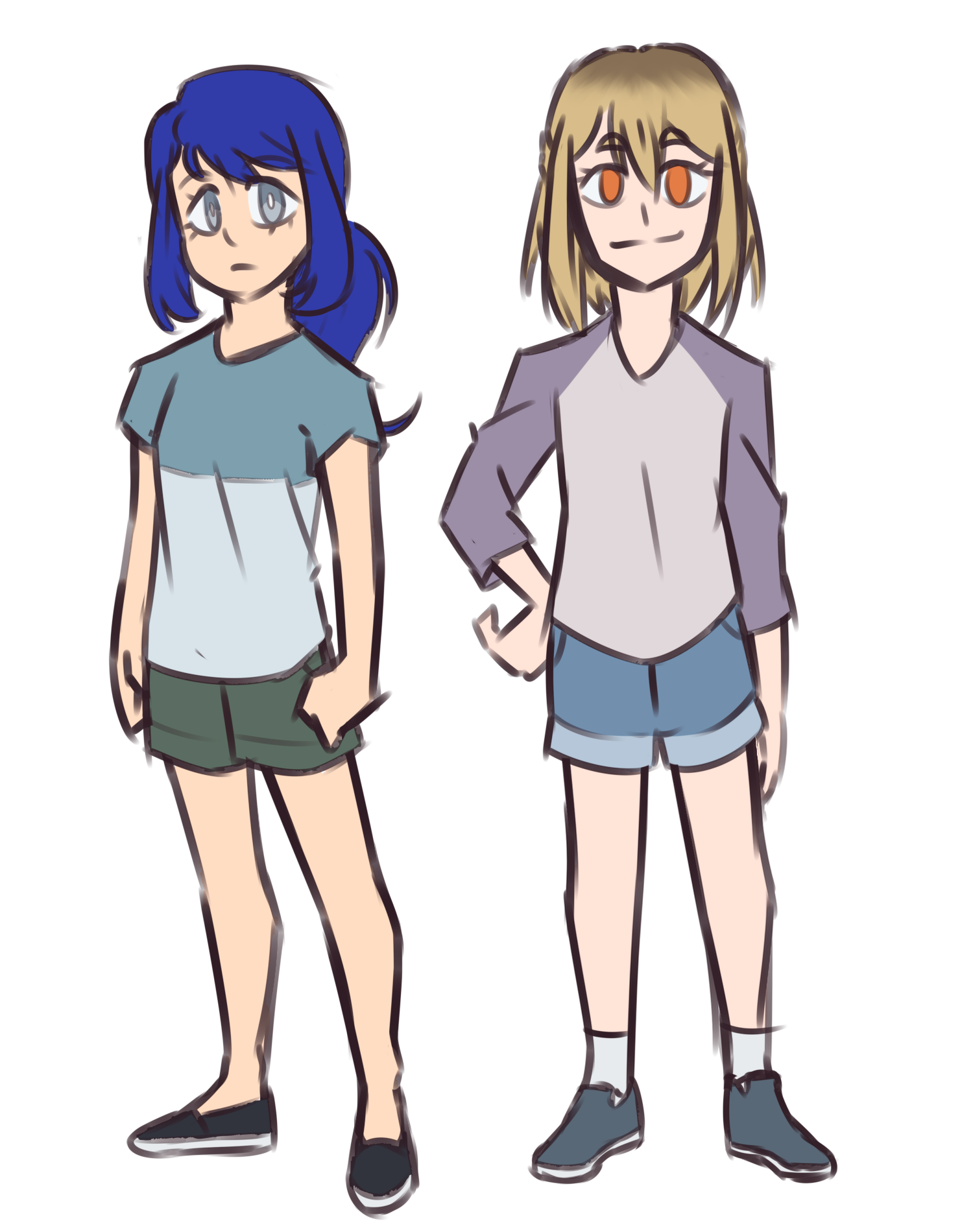 (The blue-haired girl is the main character of this story.)

It wasn’t often than Hitomi got to see her best friend in person.

Communication by call, text, and other forms of long distance between two different countries was achievable, but it would get taxing after a while.

Not to mention that seeing your best friend in person was better than anything video chat could provide.

It was the first time Hitomi and Nari had seen each other physically in 3 years, and they decided to spend their first day together with Hitomi showing Nari around the outdoor mall in her city.

That was the only thought running through Hitomi’s mind from her place on the ground.

It had all happened so fast.

Hitomi and Nari has just been walking past stores, looking at the window displays when a loud crash sounded only a few feet in front of them.

Smoke billowed, and the next thing they knew a man with disgustingly long claws protruding from his knuckles was in front of them. He reminded Hitomi of the Wolverine, only more haggard and disheveled.

He swung at the two of them, and on instinct Hitomi put up a force field around herself. He was stronger than he looked, because his swing held so much force that it launched Hitomi into a store front, her force field falling apart on impact.

She fell to the ground on her hands and knees, her ears ringing and her vision blurry. Her head snapped up in a panic, eyes searching for Nari.

She found her, midair above the villain, the springs that came out of the heels of her feet extended.

Hitomi sighed in relief, as Nari seemed to jump out of the villain’s way before getting hurt.

However, Hitomi’s relief was short-lived.

The villain grabbed Nari’s springs while she was still in the air, slamming her down on the ground before grabbing her body and holding her close, the claws held dangerously close to Nari’s heart.

He had taken her hostage.

Heroes and policemen had already arrived at the scene, but no one moved.

“STAY BACK!” he cried. “If anyone takes one step closer, I’ll slice this little girl to pieces!”

Hitomi tried to move, but her body wouldn’t let her. She saw the terrified look on her best friend’s face, yet her body refused to cooperate.

She was frozen in fear.

Out of the corner of her eye, there seemed to be a hero stationed at a building a block away, out of the villain’s sight. Hitomi saw the hero aim a sniper rifle, and take a shot.

Everything seemed to happen in slow motion.

The tranquilizer bullet hit the villain dead-on, but not before the villain was able to slice Nari from the neck to her chest.

Blood came spitting out of her body as she fell to the ground. So. Much. Blood.

It was the most nauseating sight Hitomi had ever seen.

But her body didn’t let her.

She walked to the chair stationed by the bed as her friend turned from the window to look at her.

“Better! Hospital food is still nasty as usual though.” Her voice came out groggy from the lack of use.

Hitomi poured her a glass of water and handed it to Nari.

“Ah, thanks! My throat’s been feeling really dry lately since I haven’t been allowed to talk as much. I keep telling everyone my throat feels fine, but they keep shushing me.” Nari’s lips pursed in a pout from the thought of everyone telling her to stay quiet. Hitomi only stared at her hands in her lap.

“Hitomi… you know it’s not your fault right?”

“Hitomi, look at me.

“I’ve told you so many times already, and I’ll keep saying it. What happened wasn’t your fault.”

“It’s not your responsibility to protect me.”

“You shouldn’t feel guilty over something that’s not even your fault!”

“Even if you say it’s not my fault, that doesn’t change the fact I could’ve done something!”

Hitomi was standing, tears starting to pool in her eyes.

“I could’ve have protected you Nari, and prevented you from ever getting hurt, but I didn’t, even with my quirk! I could have kept you safe, and I didn’t!”

“Hitomi, there’s nothing you could have done. You put one up around yourself on instinct, just like how I tried to jump out of the way. We’re 12 for Christ’s sake, stop feeling like you’re holding the weight of the world on your shoulders!”

“Nari… I’ve enrolled in a hero novice course for next year.”

“I couldn’t stop thinking about it. Why, just why was I given this quirk? Why am I given it if I don’t do anything with it?

I’m going to train, and I’m going to get stronger. I’m going to use my quirk to protect others, otherwise why am I allowed to have it and not someone else who will actually use it?”

By this point tears were streaming down Hitomi’s face. Nari was just staring in disbelief.

“I’m going to get stronger, so I can make up for not saving you. So that neither you nor anyone else will get hurt while I stand by ever again!”

With her vision watery and her voice cracked, Hitomi turned and walked out of the room.

And that's the first chapter! I stayed up till 12:30 AM on a school night when I first wrote this on Google Docs, so sorry if it's a little wonky. Hitomi's beginnings turned out a lot angstier than I intended back when I first made her, but oh well :0