This is an audio experiment using remixed podfic clips to create a new story. The authors of the stories used appear in the end notes. A text version will be provided at the beginning of 2015. 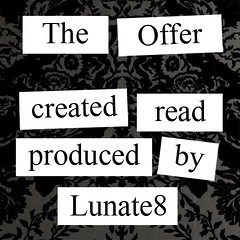 Please do not upload or stream this podfic anywhere without my permission.

[slightly modified notes from my DW/LJ, 7 May 2013]
Procrastination and a Twitter dare in mid-December 2012 (thanks, eosrose!) were enough motivation for me to finally try remixing podfic. Fortunately I'd already been thinking about this for a while; nothing specific, just vague ideas and possibilities. The process of doing it was both harder and easier than I thought.

You've probably noticed this already, but "John" is a really common name in media fandom. I knew I wanted to take advantage of that when looking for clips where John -- whichever John I decided to focus on -- was saying or doing anything, and then decided to use that confusion as a pairing gag. I limited myself to my own podfics for the sake of time and familiarity (and, admittedly, permission issues), and started reading through the story texts, looking at the raw material I could use. And I still got overwhelmed by how much there was.

Then I re-read "My Name is John Sheppard: I'm a Mathematician" by thingswithwings and found Rodney's quote as my punchline which, in my head, meant that the story had to appear to feature John WATSON/Sherlock initially. Which left me with exactly one podfic to pull Sherlock's actions from: "Subliminal" by cesperanza. (To me, anything from the "recreational aphasia" podfic written by saraht that I did would sound too different, what with all the purposeful background noise.) Great! Now I could start pulling lines about John Sheppard from all the SGA podfics I'd done, right? Not exactly: "Subliminal" is written in present tense and most of my SGA podfics... weren't. Thank goodness "Mathematician" was, though! I went back to that story and found the handful of lines with actions that mention Sheppard by his first name. It was one of those situations where more limitations resulted in more creativity, or at least less time spent making decisions. Unlike the dialogue. Argh, so many choices!

I copied and pasted the lines I thought I might use from the stories into a text file, and then basically played a word processor version of "magnetic poetry", switching things around to see how they'd fit. Ultimately I used material from six of my earlier podfics. In order of appearance:

1. Subliminal, text by cesperanza
2. Jeffrey Nullier's "Man With Fedora", text by sam_storyteller/copperbadge
3. Expatriate, text by LtLJ
4. My Name is John Sheppard: I'm a Mathematician, text by thingswithwings
5. Suppose It's Too Much To Call Coincidence, text by seperis
6. The Latina Progenitor Invasion, text by ljc

Once I had a draft of the remix, I clipped the audio files for the lines I needed. (Another good thing about using only my own podfics: I have the original uncompressed recordings.) One of my other self-imposed limitations was using complete phrases with obvious stops that were ideal for clipping. The final product was going to sound a bit unnatural anyway, but I was shying away from the really clipped style that's evident in the audiofic "Spork!", a remix of the Star Trek reboot novelization audiobook by cirrocumulus (LJ) and jiaren_shadow.

It was a fun project to attempt, and I've got other ideas for future projects. But after finishing up "Texts from Cephalopods" I may take a bit of a break from podfic editing that requires more than one audio track. :)

error_42, RevolutionaryJo, and jelazakazone as well as 1 guest left kudos on this work! (collapse)