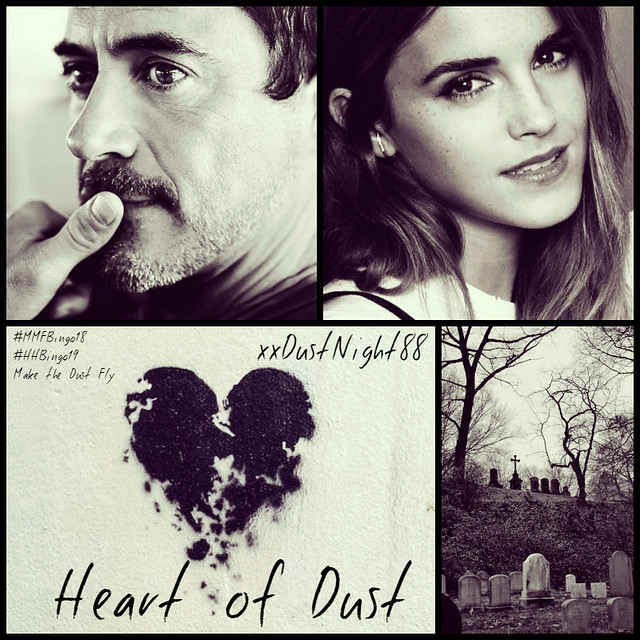 After it all, the only thing left of his heart was dust.

More angst. This time involving Tony & Hermione. Written for both #MMFBingo18 and #HHBingo19! Enjoy, my loves! Sorry for the feels!

Thank you to GaeilgeRua for allowing me use of her Grammarly subscription to beta read this. Any other mistakes you find are definitely my own. Much love, xxDustNight

Disclaimer: All non-original characters, plot points, and information belongs to those at Marvel Studios, Warner Brothers, or J.K. Rowling. The story plot and dialogue belongs to me. I do not write for profit.

Prompt: MMF N5: "Feelings that come back are feelings that never left."- Frank Ocean/HH I5: Tragedy

The death of a loved one is never easy. What's worse is when you think someone is dead and they're really not. It'd been ten long years since Tony had disappeared into another world and Hermione had vanished from this world with the snap of a finger.

Tony stood over her grave mourning her just as much as he had that first day back on Earth. It didn't matter that he was alive or that Steve forgave him… Hermione was gone, and he was, in all sense of the word, alone.

Ten years later and still he knew that he would love that witch the same as before if she returned to him. But she hadn't, and that was the problem. When they'd restored order to the world and brought back so many that had been lost, Hermione hadn't returned.

She wasn't the only one. Wanda had remained dust, and so had Sam Wilson. Bucky too. Where they ended up was a mystery to everyone. Carol Danvers and Thor had gone off planet to try and find those who may have been misplaced but had no luck in finding them. After five years they'd given up and returned to Earth empty-handed.

Tony would have been satisfied if she'd died in a regular way. Car accident. Magical mishap. Anything but this. He didn't even have her dust to bury like some others did. All he wanted was to hold her one last time before letting her go. They'd never even had a proper goodbye the day he left.

She'd been off to work and he'd just charged off into the unknown. Had she tried to call him? Had she felt pain when it happened? He knew that so many others felt strange or an ache as their bodies disintegrated into nothing. God, he prayed to whatever god was out there that she'd not felt a thing.

He would feel the pain enough for both of them.

Finally, Tony reached out and placed his hand on the gravestone that bore her name and nothing else. "Wherever you are, Hermione, I hope that you find peace. I love you."

Turning away with tears in his eyes, Tony knew that he had to move on lest he be heartbroken forever. Staring at the cityscape before him, he had no idea how to do that. Even if he was able to move on and find love in someone else, would he ever truly forget her? What would he do then? Something inside told him that he would never truly let go of what they had together.

As he walked back toward his car, Tony decided that he would stop coming to visit the empty grave. There was nothing there. All that remained of Hermione was inside of his heart and in the memories that he kept. All the feelings that continued to stir within him would be his forever as well. Even if he suppressed them, they would never truly leave him. She would never truly leave him in that way at least. As he buckled up behind the wheel of the car that no longer gave him joy, Tony pulled away from the cemetery and into the New York traffic.

His heart was gone, turned to dust, and that was that.

For updates and information about my other works and projects, check me out on...
Facebook
tumblr
Twitter
LiveJournal
Fanfiction.net