Definitely Not An Easter Story

Nick and Judy travel to Bunnyburrow for the annual Spring Festival, unable to decide how best to break some big news to her family. 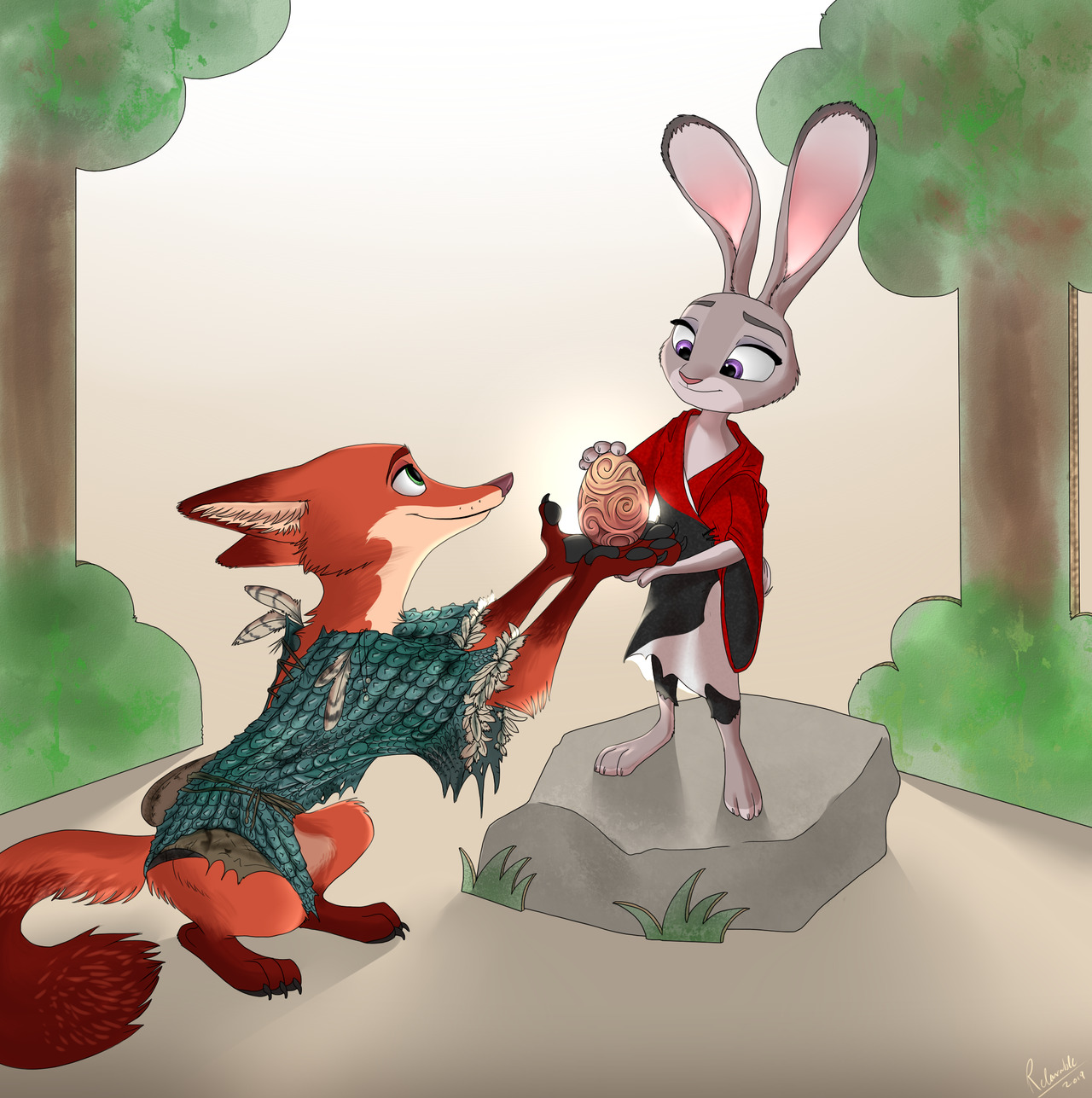 Nick nervously tapped on the armrest of his seat while he looked out the train window and watched the countryside fly by.

Judy slipped into the seat next to him. “Hey, you’ve been awfully quiet today.”

He stopped tapping and turned to smile at her. “Just thinking about our conversation last night.”

“Me too.” Judy rested her paw on Nick’s, and they both gazed out the large forward observation window. After a few moments, she spoke again. “You know, one of my sisters brought a weasel home last year for prom, and my parents didn’t freak out.”

“I remember. But you and I both know this isn’t the same.” Judy sighed and nodded. They sat quietly until the train pulled into the station and she patted his paw. “There’s no hurry. Just relax and enjoy the Spring Festival, and we’ll figure out how to tell them when the time is right.”

They looked out the window at the large fluffle of rabbits waiting for them, and Nick couldn’t help but cringe when he remembered the chaotic meeting with Judy’s family the one time he’d been to Bunnyburrow before. As if reading his mind, Judy said, “Don’t worry, Slick. I told everyone to chill out this time. Oh, and I almost forgot, my siblings are dragging me over to say hi to a few old friends from school. Can you sign us up for an activity? Pick whatever you want, and meet us back at the Hopps produce stand.”

One bunny tsunami later, Nick made his way to the large red barn at the center of the fairgrounds. He browsed through the various fliers on the bulletin board and soon realized most of the “activities” looked way too much like work, until Nick spied one signup sheet seeking “entertainment with a Spring theme.” He remembered Judy telling him about her aspiring acting career as a kit, and putting on a play sounded like way more fun than moving boxes of produce or setting up and breaking down tents and food stands. On one of the blank lines he quickly wrote Theatrical production, by Judy Hopps. He paused for a moment, before adding, and family , along with his and Judy’s phone numbers.

“I wish you’d talked to me before you signed us up for this.”

“What happened to picking whatever I wanted?” Nick stopped rummaging through a cardboard box labelled Costumes and smirked at Judy. “Besides, I thought you liked acting in plays? I mean, it’s just the Bunnyburrow Spring Festival, and I figured you, me, and maybe some of your siblings could act out any old Easter--”

Judy cut him off with a shriek. “You didn’t say you’d put on an Easter play, did you?”

Nick gave her a puzzled look. “Well, not specifically. What’s wrong with Easter?”

“So you don’t celebrate Easter--”

“NO!” Judy sighed and paused a moment before continuing in a calmer tone. “No, but we do celebrate the normal less offensive ones.”

“Huh.” Nick rummaged through the box again and pulled out a small fox costume. “What kinds of plays did you have with foxes in them?”

Judy looked at her feet, her ears blushing scarlet. “Not ones that were particularly friendly to foxes. I wore that costume as a kit when I played the trickster in one play--”

They were silent for several awkward moments, before Judy said glumly, “Now what? We’ve only got two days until we go on stage and put on a play that insults every single bunny who sees it, or one where you’re the bad guy?” She paused. “Unless you want to dress up like a big rabbit?”

Nick laughed and shook his head. “I don’t think so, Carrots.” He looked pensive for a moment. “You know, not everyone believes in the randy rabbit stories normally associated with Easter.” Judy flinched when Nick said the last word, but he ignored her reaction and continued. “My mom once told me a story she heard from her gram gram… could we borrow some of your younger siblings and this fox costume? I have an idea I think you’ll like.”