The Lair of Grom

Not only has Jamie had to adjust to the Doctor's new face, but his honeymoon has been interrupted and he's left with a discontented bride … who, along with Sarah Jane, has now gone missing. Set not long after The Ark in Space story arc. Fourth story in the Time With a Twist of Tartan series.

Not my characters, except for Kathryn and the baddies. This story is for entertainment purposes only. No copyright infringement is intended. Once again, this story is unbetaed so any mistakes are mine and mine alone. 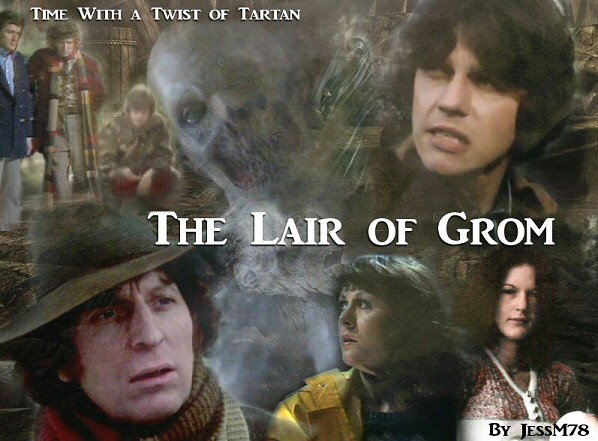 Three weeks. It had been over three weeks since the Doctor was last seen. Well, three weeks since Sarah Jane had seen him. It had been a wee bit longer for Jamie, of course. He had hung around UNIT HQ, hoping the Time Lord would finally turn up. Sarah had told him everything: what had happened at the monastery where Captain Yates had stayed; on Metebelis 3, that planet with those strange spiders; and finally their encounter at the monastery with the Doctor's old teacher, or whoever he was.

After learning the gruesome details of what had happened to the Doctor courtesy of The Great One on Metabelis 3, one wouldn't expect the Doctor to come through it all right. Jamie knew him, though; knew him better than anyone. He couldn't count the Doctor out.

Sarah herself hadn't stuck around much. It seemed as though she'd tried to go on with her life and put the Doctor out of her mind. Jamie could tell she wasn't having much success, though. In the few times he did see her, she seemed quite preoccupied.

He certainly hadn't expected her to show up today. He'd wandered into the lab, mainly looking about the room and thinking this would be the day the trusty old TARDIS would finally show up in its usual corner.

Sarah had entered the room, looking around forlornly until she turned and started a bit. “Oh! Jamie,” she exclaimed in surprise.

“Hello,” he greeted her with an awkward smile.

“I didn't expect to see you,” she told him sheepishly.

“Aye, 'm still here. Kathryn an' I are going tae get some lunch. While I wait fer her I jus' thought I'd come in here an'...” He trailed off, unsure of how to continue.

Luckily she seemed to understand perfectly. “I know what you mean,” she said with a sad smile.

The Brigadier suddenly entered the room, also seeming surprised to find them here. “Hello, Miss Smith. McCrimmon,” he greeted them.

“Oh, hello, Brigadier,” Sarah replied. “I just thought I'd pop in and …” She trailed off and her smile faded. “Well, to tell you the truth, I don't quite know why I did pop in, actually.”

The thin smile on the Brigadier's face seemed sympathetic in nature. “To see if there was any sign of the old fellow, eh?”

Jamie nodded with a tight smile of his own. “Aye,” he said quietly.

“But there can't be, can there?” Sarah spoke up. “I mean, he's been gone over three weeks now.”

The Brigadier gave a slight shrug. “Oh, that's nothing. One time I didn't see him for months. And what's more, when he did turn up he had a new face. Could have been a completely different man.”

Jamie nodded and his eyes then widened as the meaning of the Brigadier's words hit him. That must have been when “his” Doctor had changed into his current incarnation. Jamie could imagine what a shock it was for this military man to find the Doctor looking and acting completely different.

“No, he knew if he went back there he would destroy himself!” Sarah persisted. “We'll never see him again.”

“Hey, now don' be speakin' this way,” Jamie admonished her lightly. “The Doctor has been in tougher situations than this. I know he will come back.”

The rest of her statement was drowned out by the familiar whirring sound of the TARDIS materializing in the corner of the room. Jamie's eyes widened as he watched the doors open and the Doctor clumsily rush out.

“Hello, Sarah. Jamie,” he greeted tiredly, barely standing. He briefly turned to acknowledge Jamie with a slight nod before turning back to Sarah. “I got lost in the time vortex. The TARDIS brought me home.”

The Doctor sounded completely exhausted from the way he spoke. Whatever happened, it seemed it had taken a lot of his energy. Jamie hoped that with some rest he'd be good as new in no time.

Yes, from the way he'd suddenly fallen onto the floor, it was quite obvious he needed rest. Jamie rushed to grab him, but he was like dead weight and had nearly knocked Jamie himself over. Finding a cushion next to the bench, the young Scot handed it to the Brigadier who placed it below the Doctor's head.

“Oh! Oh, Doctor, why did you have to go back?” Sarah asked him desperately, sounding as if she were about to cry. Jamie suddenly felt fear growing inside him. This was indeed more serious than he'd expected. Sarah had mentioned earlier that the radiation from the Great One could kill him, but Jamie had refused to believe it. He couldn't imagine the Doctor being in such mortal danger.

Despite his weakened state, the Doctor seemed to notice and had brought a hand up to her face. “A tear, Sarah Jane?” he said. “No, don't cry. While there's life, there's ...”

His voice trailed off and he uttered a soft sigh. He was gone.

“Doctor!” Jamie exclaimed. He lowered his head to the Doctor's chest, hoping to find a heartbeat but all he heard was silence. “Doctor,” he repeated, his voice breaking. “Ye can't …”

Sarah closed the Doctor's unseeing eyes and the finality of it smacked Jamie upside the head. This couldn't be the end of him. It just couldn't.

Somewhere amid his overwhelming shock and grief, he faintly picked up on a strange buzzing sound coming from somewhere in the lab. He struggled to take his gaze off the Doctor's supine form and found a strange, little man materializing on top of a desk in the other corner of the room.

Jamie's eyes narrowed in curiosity as he gazed at the man. He was wearing a robe and a hat upon his head that reminded him of the monks they had met in Tibet when they first encountered the Yetis. He wore a small pair of spectacles and was seated with his legs crossed in front of himself.

“It is all right,” the man spoke placidly. “He is not dead.”

Sarah looked positively stricken. “Oh, no. I don't think I can take much more,” she groaned. Jamie moved to her side and took her into his arms, holding her in a tacit sign of support.

The strange man smiled apologetically. “I am sorry to have startled you, my dear.”

Out of the corner of his eye, Jamie spotted the Brigadier quirking an eyebrow as he eyed the stranger. “Won't you introduce me to your friend, Miss Smith?”

Sarah moved to stand up and Jamie let go of her. “Oh, er … Yes. This is the Abbot of … No, it's Cho-Je,” she exclaimed. She then cleared her throat awkwardly. “I mean, it looks like Cho-Je but it is really K'Anpo Rinpoche. I think.”

“Thank you. That makes everything quite clear,” the Brigadier deadpanned.

“The Doctor is alive,” the little man suddenly declared.

The man … Cho-Je...K'Anpo --- whatever his name was, seemed undeterred. “All the cells of his body have been devastated by the Metebelis crystals, but you forget, he is a Time Lord.” A disarming little smile quickly spread across his face. “I will give the process a little push and the cells will regenerate.”

Regenerate. Jamie's eyes widened upon hearing that word. He suddenly remembered what the Doctor's future incarnation had told him all that time ago, about the process he underwent in order to gain a new body and personality. That was the word he had used back then as well … “regeneration.” Suddenly feeling a bit overwhelmed, he knelt down on the ground once again, turning back to the Doctor.

“He will become a new man,” K'Anpo continued.

“Literally?” the Brigadier asked before a knowing, weary expression overtook his face. “Not again,” he said tiredly.

“Of course, he will look quite different,” K'Anpo added. “And it will shake up the brain cells a little. You may find his behavior somewhat erratic.”

“When will all this happen?” Sarah asked.

The little man's smile widened, making him appear almost child-like. “Well, there's no time like the present, is there.” He aimed his fingers in the Doctor's direction and then slowly began to fade away. “Goodbye. Look after him.”

“Wait!” Jamie cried, jumping up and running toward the now empty space. He sighed in frustration and raked a hand through his hair. He stared sadly at the floor for a moment until he felt a slight tug on his shirtsleeve and turned to find Sarah regarding him earnestly.

“Jamie, look,” she said, her voice barely above a whisper. He turned in the direction she indicated but found nothing out of the ordinary, save for an odd background noise he could only describe as the sound of a hundred crystals tinkling together.

The Brigadier had looked about the room in futility as well and begun to make his way toward the doors when she grabbed him. “No, wait, Brigadier, look!” she cried. “I think it's starting!”

Jamie had barely heard him as the noise intensified. He stared in shock as he watched the Doctor's appearance slowly transform. The wavy, gray and white hair had turned into a mop of brown curls, his skin had changed into that resembling a younger man, and his facial features seemed to change as well.

All Jamie could do was stand with his jaw practically on the ground, completely unaware of anything else going on around him at that point. This 'regeneration' the Doctor had once spoke of was happening before his very eyes … And he didn't know what to think.