Deku is a scavenger wandering the war-torn lands of his kingdom. A certain encounter during a trip makes him realize a few things about himself, and as a result of this, he embarks on a journey that is no longer solely about scavenging, but also to procure more things to satisfy his newfound want. More of "them", and magic to keep them "good".

After all, it is a war; anything goes, so long as Deku doesn't get caught.

Chapter 1: Prologue: That One Encounter

Deku comes across a ransacked fort.

I never knew I would write fanfiction of my very dark kinks but thanks to encountering people who like the same things I do, I got the necessary motivation and inspiration to write AND draw this!

Oh and this story will have little to no dialogue, relying on a third-person POV to describe everything.

With no further ado, enjoy!

There was a kingdom of peace in far away lands, a kingdom now locked in bloody clashes with another invading land, whose numbers and weapons are superior, and they have fought past its borders, looting all this kingdom's riches, placing every captured town under martial law, and killing all who stand in their way. The invaders are ruthless, and will stop at nothing until this land is theirs to call.

Enter Deku, a result of the war and lone scavenger who inherited his current estate, the Plus Ultra manor, nestled away in the hills deep in the middle of the green forests, safe from the invaders. The former owner, All Might, made his riches in the exotic lumber business, and was very influential due to his willingness to help build towns using his lumber, granting him a title of an honorable philanthropist. However, the day before the invaders came, he just disappeared, and Deku discovered a letter in All Might's office, saying the entire business, and the manor, is his now. Once the invaders came, people were reluctant to stay and fled the estate, paranoid they'll be found, so they headed deeper into the kingdom for safety from the invaders. One by one, the staff left, from the mere lumberjacks, to the manor's servicemen themselves.

Now, Deku is alone in this huge home, but at least he isn't weak, having a built physique, training himself to wield daggers, and has learned some magic from all the leftover tomes in the library, learning his trademark "Green Sparks"; all this, due to his vast amount of time being left alone and without anything to do. But once supplies in the estate started to dwindle, Deku had to resort to going around the kingdom, scavenging foodstuffs, trinkets to sell for gold, and so on. So far, months into this whole conflict, Deku is doing well, keeping himself fed and flush with enough coin to get a few luxuries, however, his current life is a far cry from what he used to have, but he's content. He even considered moving elsewhere, but he thinks of All Might's legacy, and is reluctant to call anywhere else home, so he stays.

Right now, Deku's on the road, in war-torn lands looking for places to scavenge things off from. With a carriage and steed, he looks around the vicinity, mostly eerie grasslands, and in the distance, he spots what appears to be a ransacked fort, belonging to the invading kingdom as shown by-black and-yellow colored tattered banners. As he approaches it, no one seems to be around, so he enters the fort and starts poking around, finding a number of tents and crates scattered all over, some wrecked and burned. A lot of the supplies had been taken already as well, probably by the attackers or looters, so he searches the bodies for any gold on them, weapons in good condition to resell, and so on. Then he comes across what appears to be the fort commander's tent, having gaudy designs.

He parts the entrance flaps to the side, and on first glance deduces that there's nothing of value inside. Further inside, however, he comes across what appears to be the corpse of the base commander, clad in ebony armor lined with gold, face down on the planning table. Deku thinks he hit the jackpot, since he can just remelt the armor and sell it for more money; ebony metal is, after all, a very expensive metal.

Deku tries to lift him off the table, but the commander's armor is heavy, so Deku resorts to pushing him off the table, landing on his back with a metallic thud. Deku may be strong, but ebony is heavier than feathers. Now laid out, he starts to strip the armor off him, starting with the commander's helmet.. After unfastening some straps, Deku is able to lift the helmet off him, but what he sees next has him mesmerized. The commander has a really handsome face, topped with blonde spiky hair, pale skin, sharp features, and Deku can't help but caress that beautiful face, skin smooth despite a few battle hardened scars.

However, Deku scolds himself for the "weird" thing he's doing, and reminds himself that he's here for the armor, so he shakes his head, and puts the helmet in his sack. Next, he goes for his gauntlets, pulling them off the commander's hands, and once off, his touch lingers on the blonde's hands, smooth in some parts, rough and battle hardened in others. Deku finds himself tracing the blonde's fingers with his own, enamored by it's texture. He goes to remind himself of the armor again, then tosses the gauntlets into the sack. After that, Deku takes off the sabatons and the rest of his leg armor and immediately tosses them into the sack, but not before massaging his feet for a bit, feeling up those strong legs, and slowly moving upwards to his built thighs; he finds himself staring at the blonde's crotch, covered up by only his underwear, a loincloth, but Deku can see that he's packing, noting the impression of a sizable dick under that loincloth, head peeking out even.

Deku found himself staring at it for a time until he snapped out, shaking his head, flustered annoyed at himself for being so distracted at a male corpse, and even more so because of his penis; this is the first time it happened to him too, having no problems with the previous corpses he had to strip, but in Deku's defense, they were unattractive. This lead to a lot of thoughts, which led to more thoughts, and Deku found himself so distracted with his thoughts that it took a random crow's screeching minutes later to knock him out of his mumbling stupor. With Deku's mind back to earth, he goes back to stripping the corpse, going for the pauldrons and he yanks them off quite easily, and tosses them into the sack. Now he's left with the hardest part, the cuirass, with all the stuff he has to untie, and only now does he notice that one thing jutting out from the blonde's upper chest. He first yanks that out, and sees that it's a poison-tipped arrow, and made of ebony too, which explains how it pierced his armor. He cleans the arrow with a cloth, ridding it of blood and expired poison, so Deku has no need to fear of getting poisoned. He uses the arrow tip to cut the straps, each and every one of them, and it took him quite some time until they're all cut.

The cuirass armor plates have proven to be the heaviest pieces, and Deku figured placing them in the sack would really add up to its weight. It took some time cutting all the straps, but once the chestplate is loose, Deku lifts it up with mild difficulty, and sets it to the side, revealing the blonde's torso wearing a loose, sleeveless tunic. Deku is marveled by the blonde's arms, hard biceps that curve into hill-like formations, and as he goes to the center, a tuft of blonde hair on his pits, then the impression of his big, built chest on the tunic, along with small protrusions of his nipples. Deku realizes he'd been caressing him absentmindedly, and is full-on blushing, embarrassed and mesmerized at this man's beauty, like an Ancient Greek statue; he scolds himself internally. Just for the sake of curiousity, he lifts up the tunic just a little bit, showing washboard abs that made Deku gulp, and a lightly colored treasure trail that lead to his big package. He lifts it down immediately, scarlet flustered. Getting himself back to business, he turns the blonde over on his chest, and the sight nearly made him yelp; his ass. The blonde has a nice, soft bubble butt that slightly jiggled when Deku poked it, and his pink hole was directly in front of Deku too, as if teasing him. He eventually steels himself and lifts off the backplate, unconsciously licking his lips on seeing even just a bit of the blonde's muscled back.

Now Deku has the ebony he needs, so he grabs the sack with the small pieces and heaves it to his carriage, just outside the tent. Then he comes back for the chestplate and backplate, lifting it on his back, glancing at the blonde on impulse. But once all the armor is in his carriage, thoughts of the blonde corpse start flooding his mind, images of Deku's hands caressing those washboard abs, slapping that jiggly bubble butt, groping the blonde's muscled arms, kneading that huge chest, playing with his huge dick, and most of all, putting his own cock inside the blonde's cute, pink hole. Another crow's screeching later, Deku is flustered and embarrassed but concludes that, yes, that corpse did turn him on. With this reluctant conclusion, he walks back to the tent, and the blonde is still there of course, face down and motionless. Deku thinks it would be such a waste to leave a perfectly sculpted piece of "art" like him to the crows and hounds, so he walks up to the blonde and lifts him up to his shoulders, patting his exposed butt for good measure, and he makes his way to the carriage, where he delicately places him in it. Deku lays a blanket on him, then goes up front to drive the carriage.

He has to make haste back to the manor, horse galloping at full speed before anything nasty starts happening to the blonde, thinking he has enough treasures obtained for today. Grinning and happy, he makes a note to go to town to buy some spell tomes concerning all-things corpses, but good thing there are a few ice scrolls at home that he first deemed useless, but will now be useful in preserving the blonde.. in a temporary way. 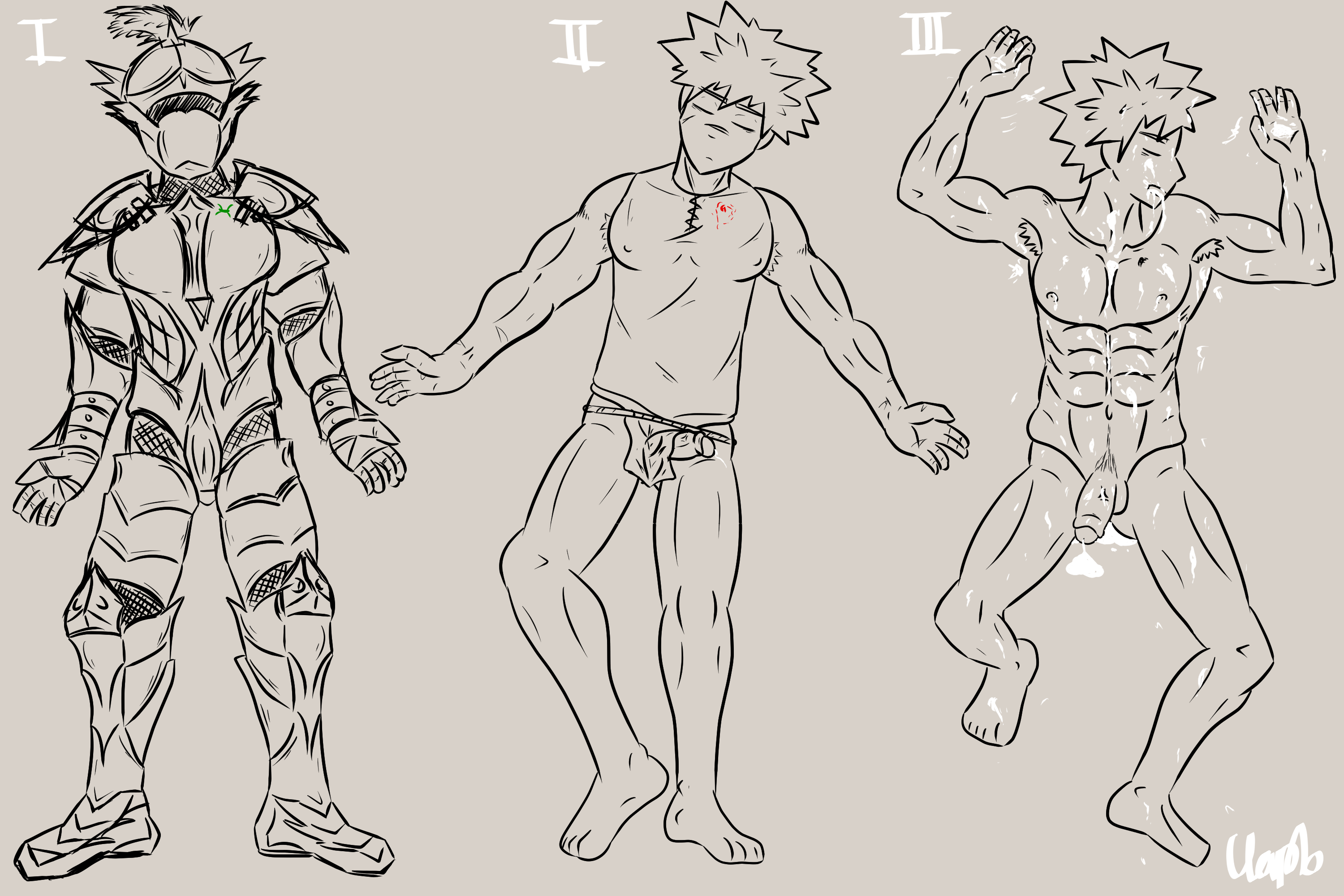 Fun fact: This started off as a really all-over-the-place thread thanks to people inspiring me, but now I've restructured it into its current format.
--
Comments, kudos, are GREATLY appreciated! I'd love to know what you liked about it!

Stay tuned for more! And I hope you liked the art at the end!