In which Hyrule is visited by calamity.

Content warning for sustained depictions of disaster. If you need to skip this chapter, this is what happens: Guardians emerge onto the streets of Hyrule as the city’s infrastructure collapses. 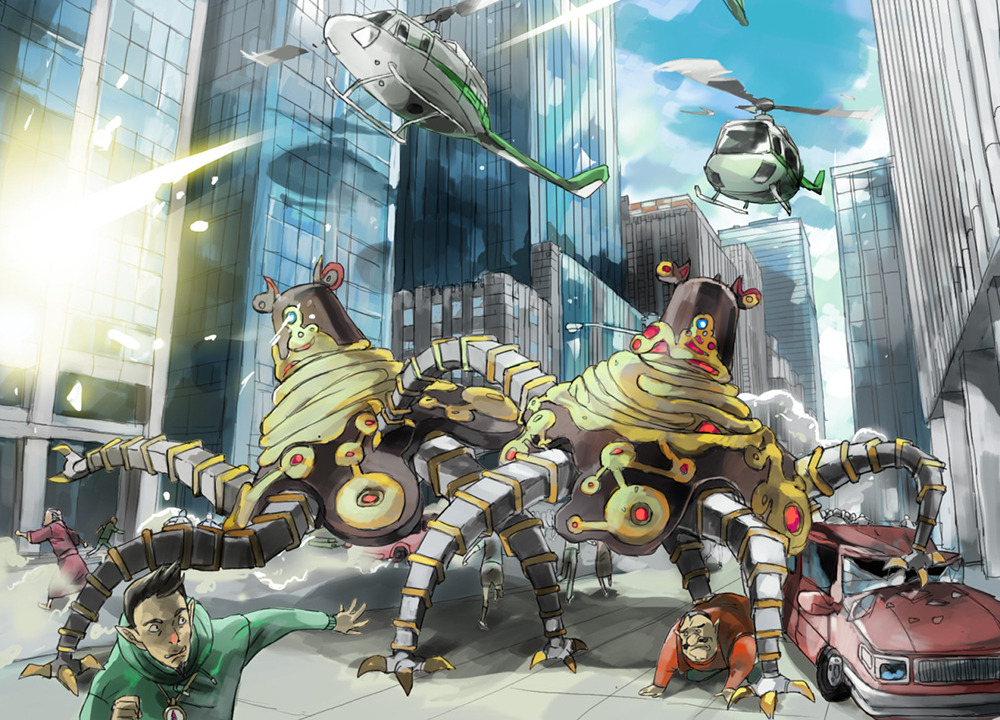 This illustration is by the brilliant and magical KrokodilYura.

It starts as a rumbling deep underground.

There is an earthquake, or something like it. The tremors are faint at first. Someone on one of the upper floors of a skyscraper might feel a swaying so subtle that they would wonder if it’s only their imagination.

The land is not content to lay still after this initial unrest.

Within seconds, the walls of buildings throughout the city begin to shake. Bookshelves topple over, and kitchen cabinets spill plates and glasses onto the floor. Lights go out as buried power cables twist and snap. Sewage and water pipes buckle, sending sludge jetting up through drains and sewer grates and out into the streets. As the city’s drainage overflow systems fail, subway tunnels and parking decks slowly begin to flood.

Cracks appear on the pavement before erupting into deep hills and valleys. There aren’t many vehicles on the road, not at this hour of the morning, but a few parked cars tip over onto their sides. Some are completely overturned. Motor oil spills onto the pavement in iridescent streams. Electrical sparks leap from fallen utility boxes onto the shimmering surface of the black puddles that collect in the hollows of the uneven asphalt, and smoke begins to rise as small patches of fire creep down the streets.

In the center of the city, where Hyrule Castle stood more than a hundred years ago, the ground splits asunder as gargantuan spikes rise from the earth. The uncannily smooth surface of these six slanting obelisks is pitch black yet still glows with an unearthly radiance. One of the government office towers leans precariously to the side before giving way and crashing into the others. Debris rains to the shattered pavement as a thick cloud of dust fills the air.

The small crowd of people who manage to evacuate the buildings gather in the front plaza but do not flee. They instinctively understand that they are witnessing something monumental, something that cannot be explained but will most certainly alter the history of their world. A few film the scene on their phones as eldritch portals appear on the steep sides of the columns.

Guardians emerge from the obsidian stone like spiders from a web, no longer relics or statues but frantically scrambling mechanical nightmares. They crawl down the sides of the pillars with jerky movements and make their way onto the street, hundreds of them, perhaps thousands. The sun casts a dull gleam on their ceramic casing as it rises.

Across the city, people who have been woken by the quake make their way outside to check the damage to their houses and buildings. More people gather on the street as news of the disaster spreads, and there is no shortage of witnesses to mark the uncanny progression of the mechanical monsters.

As terrifying as the Guardians appear, they are not aggressive. Not at first. They ignore the people standing on the sidewalks as they station themselves at points whose significance only they understand.

The earth continues to shudder. Subway tunnels collapse as elevated roads and railways are reduced to rubble. Tanker trucks overturn, and the spill of their incendiary cargo disrupts underground gas mains, which erupt into infernos. As the blaze spreads, the roads fall even deeper into a state of collapse, rendering fire trucks and ambulances useless.

Mysterious black ooze begins to seep from the cracks that have formed in the infrastructure. The malicious slime scalds anyone who touches it, preventing refugees from fleeing the flames to seek safety.

Despite the chaos, people continue to find their way out onto the broken streets. When stores don’t open, their windows are broken. If the end of the world is coming, no one wants to be caught unprepared.

The first Sheikah agents appear as silently as shadows in electric cars that speed over the scattered rubble as if it were no more than sand. They engage with neither the Guardians nor the people who have gathered in the wake of their passage. The Sheikah merely watch the machines move along the avenues, waiting for some sort of sign.

It’s impossible to say who fires the first shot. It may have been a Sheikah hoping to deflect the steely attention of a Guardian away from a crowd of people, or it may have been a civilian, driven mad with panic and fear.

Bullets are useless against the ceramic casings of the Guardians, but the creatures are not insensate. They respond to aggression with white-hot beams that vaporize anything they target. Their targeting systems are infallible. Although the Sheikah do their best to create barriers with their cars, such minor obstructions do nothing to hinder the wrath of the Guardians. Bystanders and evacuees alike find themselves caught between the Guardian attacks and the Sheikah attempts to stall their rampage, and blood joins the oil and fire on the street.

Many more people die in tragedies that will not be noticed until much later, if they are ever discovered at all.

A maintenance worker exhausted from a long shift slips on a bar of soap and falls in the shower. She hits her head on the faucet and loses consciousness, drowning in the water that will not drain. The water overflows from the tub and seeps down into the building’s electrical wiring, and the person who lives in the downstairs apartment is electrocuted when he attempts to check the fuses in the breaker box after the lights go out.

A father rises when he hears the dishes spill out of the kitchen cabinets during a particularly violent tremor, knowing that he must clean the fallen glass before his child wakes. He cuts the bottom of his foot with a sharp sliver he cannot see in the dim glow of the emergency lights, and the wound doesn’t stop bleeding until his body has no more blood left to shed. His husband, away on an overnight business trip, is not able to make it into the city in time to save the child before it dies of starvation and neglect.

A young girl, fascinated by the sight of the falling government towers, goes outside onto the balcony of her family’s apartment. As she attempts to catch one of the eerie red sparks dancing through the air, she leans too far over the safety railing and falls a dozen stories onto the hard concrete of the parking lot below. Her body, hidden from sight by a partially overturned car, twitches for hours as her parents search for her, thinking that their brave daughter must have left to check on one of her friends.

A man both recently retired and recently divorced has spent another sleepless night in his empty townhouse, so he is awake and able to heed the Sheikah emergency warnings broadcast over the radio. He packs quickly and prepares to evacuate, and not a moment too soon. The fire spreading along the remains of a ruptured gas main has already reached the corner of his block when he emerges onto the street. As he loads his luggage onto the rack of his moped, he hears a dog barking in his neighbor’s house. He notices that their car isn’t parked on the street and understands that they must have already fled. He uses the heavy ceramic pot of a plant on the front stoop to shatter the lock on their door and enter their house, rushing from room to room even as he begins to smell smoke. He finds the dog, unchains it, and orders it to run, but it will not leave his side as the fire comes in through the front door and crawls ever closer.

No hero appears to save them. There are only the Sheikah, who are not equipped to handle a disaster of this magnitude. Everyone knows about the Great Calamity, of course; it has been taught to generations of schoolchildren and dramatized in countless books and movies. In the legends, however, the damage has already been done, and only then does the hero ride forth to save Hyrule. But now there is no hero to be seen. It has been centuries since there was a princess.

In the end, no one is ever prepared for calamity.

One man might have been, perhaps in another age, but he is asleep, as is the sacred sword he might once have wielded, which lies still and unwoken by the voice of the goddess reborn.

High above the city, two people watch the plumes of smoke rise through the towers of glass and steel. Perhaps in another age they would have blamed one another for the destruction. Perhaps in another age they would have been mortal enemies, each seeking satisfaction only in the death of the other. As the sun rises on the most terrible morning of this age, they talk gently to each other in soft voices as they prepare themselves to meet a destiny that can wait for them no longer.