In an era dominated by advanced technology, Princess Zelda’s distant descendant is hospitalized and medicated to calm her nightmares and banish the voices that speak into her ears. The suppression of powers that should exist only in myth weakens a seal placed on an ancient evil, and one night the young woman answers a knock at her door to find a monster of a man looming across the threshold, naked and wild and dripping with the liquefied malice that has flooded her dreams. The only thing he knows for certain is that his name is Ganondorf, and both he and Zelda want answers. 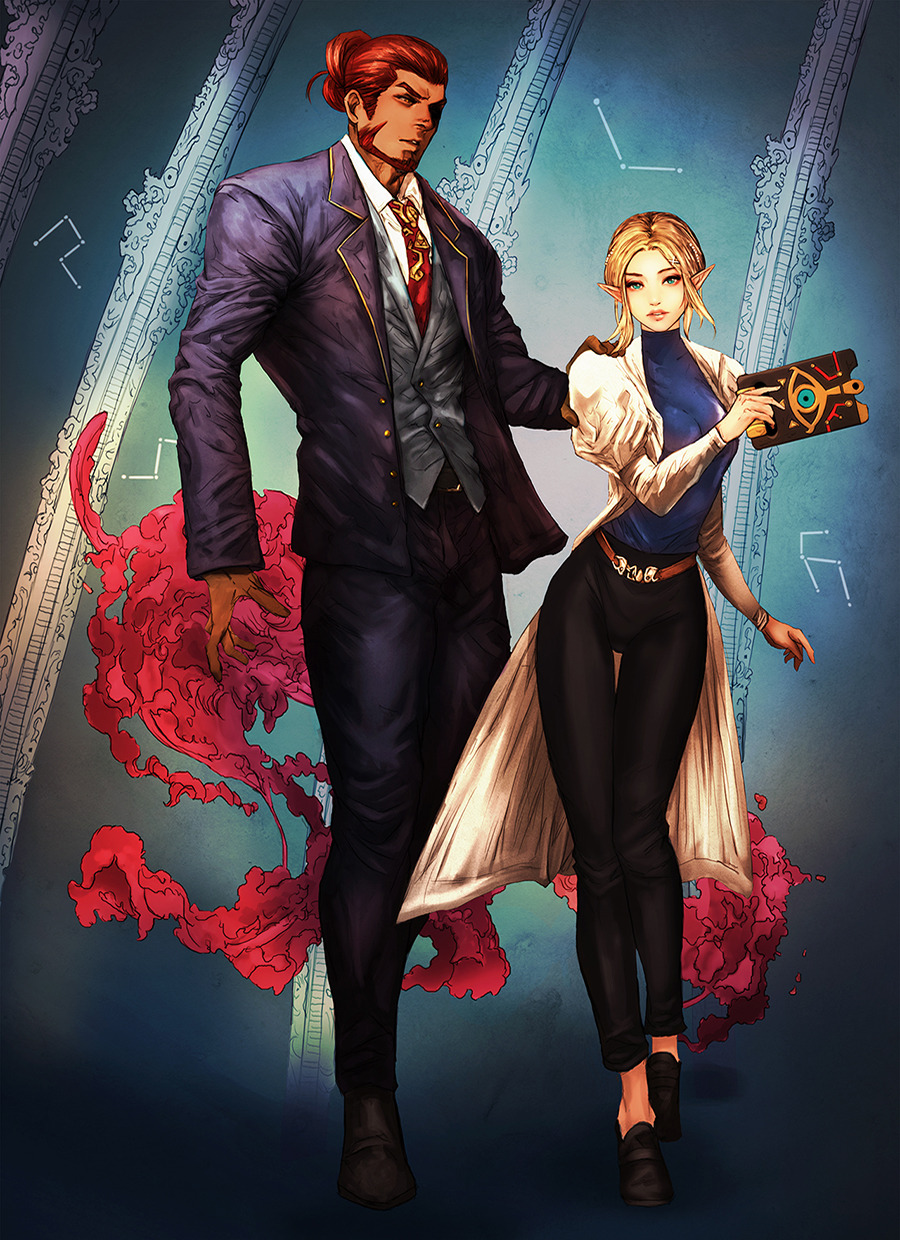 This cover illustration is by the stylish and powerful Vhyrel.

I'm honored to have received character illustrations from several incredible artists. The links below will take you directly to the chapters in which they appear.

In which an ancient seal is broken and a terrible thing stirs violently awake.

There was darkness, and then a woman’s voice. Her words were occluded, then clear.

Her command was a bright beam of light, and suddenly the darkness was suffocating. His muscles convulsed. He began to scream, and foul liquid gushed into his mouth. He couldn’t breathe. He was drowning. He lashed out, and something tore away at his fingertips. He kept clawing himself forward until his hands were free, and then his face. He gulped down air and vomited putrescence. The world was shrouded in a blurry haze, and he had no understanding of what he saw.

Machines glowed with a soft blue luminescence in a dimness that was not quite dark. The light offended his eyes, and he hurled his many limbs at it until it was extinguished. He no longer needed to use his hands, which was as it should be. The floor was cold. His body was cold. He could smell himself, and he stank. He was hungry. Ravenous. He reached out again, and another set of lights was extinguished.

He attempted to raise himself from the floor. His legs would not support him, and he fell. He crawled forward on his front arms, which were slippery with the viscous slime that oozed from his skin. Ceramic shards cut into the palms of his hands, and the sting of pain filled him with anger. His rage flared outward, surrounding him with crystalline explosions of glass and metal. In the distance, a door was ripped from its hinges.

He jerked his head toward the sound. A hazy rectangle swam into his vision. Aside from the maddening pinpricks of light he hadn’t been able to destroy, this was the only thing he could make out. There was something terribly wrong with his vision. He couldn’t see his hands in front of his face. His head felt unbearably heavy, as did his body. There was too much of him, and he barely had the strength to pull himself along the ground. He struggled forward, but the movement of his limbs was erratic. How many arms did he have? How many legs?

A piercing sliver of glass dug between his ribs as he crawled forward, and an acrid smell assailed his nostrils as ichor spilled out of him in thick gobs. He was overwhelmed by disgust. His stomach lurched, and he vomited into the tangle of hair framing his jaws as the stinking pool of fluid spilling from his body spread. He didn’t know his name, and he couldn’t imagine his face, but he knew with an unyielding certainty that he was not supposed to be alive. He was meant to die; he was sure of it.

He let out a roar and sent his limbs flying. Some detached themselves from his body and landed in the far darkness with hideous squelching noises. He flexed his limbs again, and he was lighter. It was easier to move, so he rose from the ground. He stood, overbalanced, and fell back into his own filth.

The cursed voice that had woken him was responsible for his misery. He would end his existence, but first he would find this woman and make her feel every ounce of the hurt and despair she had inflicted on him. He imagined the satisfaction of digging his fingers into her throat as her hateful voice shrieked in fear. In his mind he reached one of his arms into her chest and tore out her hideously beating heart, her shining eyes trapped within his own as their light flickered out. The ceramic coating affixed to his face cracked as the broken bone beneath it twisted his bloody lips into a horrifying caricature of a smile.