In which Bucky's shift is the best thing Tony has ever seen, no one knows what Tony's shift is and there are explosions.

So here I am again, with yet more shenanigans and ridiculousness. I would apologise, but frankly...

Does anyone expect anything different from me? :D

So, the TSB fills will slow down from here as I gear up for the Bucky Barnes Bingo! Wooo! I'm also hard at work on Captain America Reverse Big Bang, plus Broken Pieces and a few other special projects I have in the works.

So without further rambles on my part, I give you...

Many thanks to my good dude Trashcanakin, who planted the idea in my head and created stunning art for the fic. And thanks to the wonderful Summer, who beta'd for me. <3
For TSB Square R3 - Ransom Note

“I can honestly say, I never expected this. Like, on a list of ‘most unlikely things ever’ this was maybe at the bottom, maybe not on it at all. I can’t decide.” Tony cocks his head to the side, his expression caught somewhere between amused and horrified.

“Very funny, Tony.” Steve sounds long suffering, but then that’s his default tone of voice, so Tony elects to ignore it. There’s some angry chittering from around the region of Tony’s ankles and really, what is his life?

Bucky Barnes, it turns out, is a Shapeshifter. That alone is cause for some raised eyebrows, but what’s really tickling is what he turns into. He’s the smallest, angriest looking chipmunk Tony has ever seen and it is adorable.

Tony crouches down and offers his hand to Bucky; he doesn’t bother trying to wipe the grin from his face, because Bucky knows him too well at this point. “I can’t believe you didn’t tell me.” He solemnly whispers with a nod. Bucky squeaks indignantly, no doubt scolding him for laughing. Bucky gives him a narrow eyed glare before scrambling into Tony’s hand. He completely ruins the image by curling into a small, fuzzy ball in Tony’s palm, wrapping his tiny paws around Tony’s thumb.

“The great and terrible, winter chipmunk! ” Tony proclaims, lifting his hand up. A moment later he curses and nearly drops Bucky, when the little shit promptly goes and bites him.

“You know you deserved that.” Steve says, completely unsympathetically.

Bucky doesn’t realise at first that Tony’s form is some sort of secret. It took spending an hour in his other form curled up either in Tony’s hand or on his shoulder, for Bucky to get enough of Tony’s scent to know. At first, he figured it was common knowledge. It’s only when he stops to think about it that he realises Tony’s never shifted around any of them. He and Tony have been dating for months and Bucky himself only just found out.

“So, the team doesn’t know about you?” Bucky stretches and blinks languidly down at his pillow. He thinks vaguely about turning to make eye contact, but then Tony’s strong fingers dig into the muscles of his back just so .

“Don’t play stupid, it doesn’t suiiiiiit you.” Bucky trails off into a groan as Tony’s hands glide down his spine and there’s a huff of warm breath across the back of his neck.

“What was that, Buckaboo?” Bucky can hear Tony’s grin, and if he wasn’t a puddle of liquified muscle he might take issue with it. “Man’s gotta have his secrets.” Tony continues after a short pause and there’s something slightly darker in his voice, some remembered pain. Bucky grunts quietly and presses his face down into the pillow. He figures his silence is answer enough.

They’re quiet for some time, with just the smooth slide of Tony’s hands over Bucky’s skin. “It wasn’t what Howard expected,” Tony’s voice is soft, almost a whisper, and if it weren’t for Bucky’s enhanced hearing, he might have missed it entirely. “I think he always thought I’d look like him. So when I shifted the first time, the old man didn’t exactly throw a party.” Tony trails off into silence, his hands resting quietly on Bucky’s shoulders.

Bucky waits, but it seems that’s all Tony is willing to say on the matter. He grunts quietly and shrugs one shoulder in an unsubtle hint that makes Tony laugh. “He was a dick, anyway.” He offers eventually, the words only slightly muffled by the pillow. Tony laughs again. He sounds lighter already; the kiss he brushes across Bucky’s cheek is warm and fond.

Bucky more or less forgets about it after that. He knows Tony’s a shifter, and he’s pretty sure the rest of the team has guessed, but none of them know what exactly Tony is. He figures it doesn’t really matter, and Tony will tell him one day, or he won’t.

And then they get kidnapped.

Bucky wakes up on a cold stone floor, naked and sporting the mother of all headaches.

“Fucking ow. ” Tony’s voice echoes to his left and while he sounds groggy and angry, he doesn’t sound seriously injured. Bucky slowly turns onto his side, trying to ignore the way his head throbs with the movement. Tony is lying less than a foot away from him, in a very similar state. “You know, when I said we should have a date night, this isn’t even close to what I meant.” Tony muses as he rolls to face Bucky as well. “I was thinking pizza, maybe a walk through the park, and some cream soda flavoured lube.”

Tony snorts a laugh and pushes himself up into a sitting position. A moment later, he’s on his feet and poking around the edges of the room. Bucky watches his naked ass for a moment, even kidnapped there’s time to appreciate beautiful things, and then moves to join him.

“This is almost insulting, is what this is.” Tony pokes at the door, which, beyond being heavily reinforced, is just a door. There’s no laser traps or fancy electronic locks. There’s even a little slot in it, which isn’t even locked. Tony pokes at it, and like a mail slot it swings open to reveal a dim hallway outside. “There’s not even any cameras!” He hisses, now completely outraged. Bucky doesn’t reply verbally, but pushes past Tony to lean his weight against the door. When that doesn’t work, he tries hitting it with the metal arm. The sound reverberates around the room like a struck bell, which has the both of them clapping hands over their wounded, sensitive ears.

“Okay, well we’re not bustin’ the door.” Bucky waits for the ringing in his ears to subside and shrugs an apology at the flat look Tony gives him. “But, that doesn’t mean I can’t still go through.” Bucky adds and grins at the way Tony’s expression lights up.

An hour later, the Quinjet lands outside a burning building. The Avengers all stumble out, armed to the teeth and more than a little perplexed as they watch an honest to God polar bear plodding towards them against ato the backdrop of several smaller explosions. Riding comfortably on the bear’s head is Bucky in his chipmunk form, tiny paws waving victoriously.

“No fuckin’ way.” Clint is, naturally, the first one to speak, as the distinctly brown eyed polar bear comes to a stop a few feet away. The bear’s mouth opens in a close approximation of a grin, all but radiating smugness.

“We got the ransom note, which I now see was terribly pointless of them.” Steve grins, sliding the shield back into its harness.

“This explains more than it doesn’t.” Natasha deactivates her Widow’s Bites with a tiny sigh, casting an almost disappointed look at the burning warehouse.

“How are you guys so calm?” Clint laments, pouting at the pair of shifters. “Of all things, why a polar bear, Tony! How am I supposed to make grizzly puns if you’re not an actual grizzly?”

“Grizzly puns?” says Steve, in the tone of someone who already regrets asking.

Steve blinks, slowly, the expression on his face acutely pained. Clint throws his hands up in the air and turns back to the Quinjet, yelling something about muddy sticks over his shoulder. “Tony,” Steve says after a long pause. “You’re unbearable before you’ve had your morning coffee.”

“Oh, my god.” Natasha whispers, horror sliding over her features. “I work with actual children.” 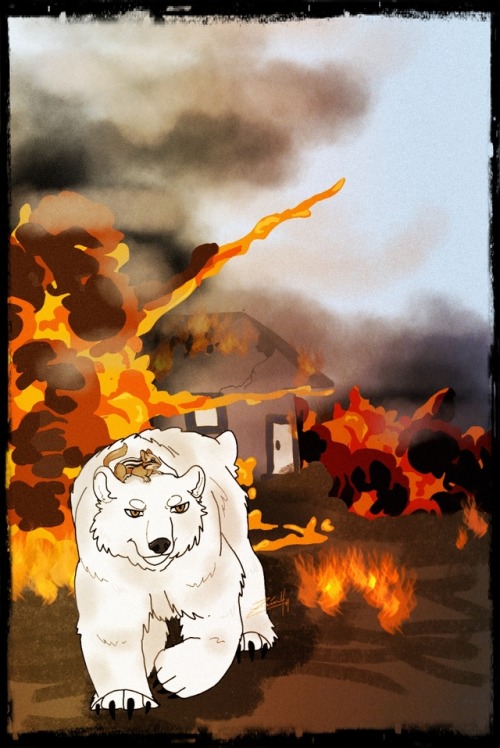 So, fun fact! Did you know male chipmunks are called "Bucks"? XD