The Silent Words I Hear You Say

Dean Winchester has a great life.

Seriously, ask anyone. He has a great job, great friends, and an even greater family. It’s all just something out of a fairytale, really.

Castiel is fairly content with his life. Not happy, but…content. It works for him.

And it's at this place, between unhappiness and discontent, where everything changes.

I AM PUTTING WRITING THIS STORY ON HOLD FOR THE TIME BEING UNTIL I FIGURE MY SHIT OUT! SORRY FOR THE INCONVENIENCE THIS PROBABLY DOESN'T CAUSE YOU!

Hey guys! So, I'm working on this story right now but it's in its EARLY stages so A LOT is probably going to change. I'll add characters and tags as they become relevant but so far I've only written the first and second chapter, so bear with me lol

Anyway, as you can see from the tags, this one does have a happy ending. That part I do have figured out so I hope that makes you happy!

Let me know what you think!

Check me out on tumblr for updates on my other stories. I'm allmystars-i

I'm still trying to figure tumblr out though. Just a heads up!

Chapter 1: Who Gets To Choose? 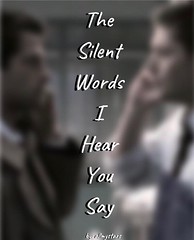 Dean Winchester has a great life.

Seriously, ask anyone. He has a great job, great friends, and an even greater family. It’s all just something out of a fairytale, really. He’s next in line for a promotion to Detective, and he’s got his best friend as his partner and drinking buddy…seriously, what could be wrong with that?

Even as he walks into his local family-owned-and-run coffee shop, people stop and stare; in awe of how confident…how charming…how put together…

And Dean just smiles back at them, his teeth too white and too straight—his smile too perfect—as he grabs his and Benny’s coffees off the counter where they wait for him, handing over a tenner and leaving the change for the awestruck barista.

“Thanks,” he says with a wink, and she practically swoons. He leaves the shop, feeling eyes on him as he goes and he tries to ignore them but it still has his stomach flipping as he smiles at the handsome blue-eyed man holding the door for him. Dean gives a nod of thanks before hurrying to the police cruiser and sliding into the passenger’s seat.

“What took you so damn long?” Benny jokes, grinning as he pulls out into the street while taking the coffee Dean hands him.

“Yeah, yeah. You’re just jealous that they know my order by heart.” Dean sips his coffee and scans the streets, not really looking for trouble—just keeping a watchful eye.

“Hell yeah, I am! It takes me a good twenty minutes to get in and outta there,” he shakes his head. “And that’s on a good day!”

Dean chuckles. What can he say? Benny’s not wrong, after all; it’s why Dean always goes in—they see the cruiser pull up and have his order ready and rung in before he walks through the door. He can’t even put it down to a perk of the job since no one else gets the same treatment. Perk of being a local, maybe? But Jo’s a local and no one has her order ready to go when she pulls up in the car.

Whatever the reason, he’s not complaining. Benny isn’t either since he swears they brew a new pot when they know Dean will be there. It’s damn good coffee, too, so yeah…no complaints.

Dean’s phone buzzes in his pocket and he pulls it free, reading the text before relaying it to Benny. “Charlie wants to go for happy-hour drinks. You in?” He raises an eyebrow at him when Benny glances his way.

“Hell yeah, I’m in! Been a week from hell.” He shakes his head as the radio crackles to life.

“10-97 in progress,” the dispatcher reads off the address. “A civilian has called in a complaint about loud shouting and banging coming through the walls of his apartment from number 213.”

“10-4, Lafitte and Winchester on-route,” Dean says into the crackling handheld clipped to his bicep. Benny flips on the lights and turns the car around, heading towards the address Dean has written on his note pad. As much as Dean loves his job—and he does; the adrenaline rush is like nothing else in the world when they get a call—it’s times like these that get to him. He loves to help people and always has, but rarely do calls about domestic violence end well. Rarely do those being abused realize the severity of their situation. Rarely do they take the help they're offered. Sometimes…but rarely.

They pull up outside a rundown apartment building, parking the car and taking the stairs to the second floor.

“Oh, good! You’re here!” A small, hunched-over gentleman approaches them when they open the stairwell door and step into the hallway. “They’ve been shouting for half an hour! I don’t know how they haven’t killed each other yet!” He shuffles agitatedly, wringing his hands together in front of his protruding belly as his housecoat starts to come undone.

Dean looks away, forcing his eyes to stay locked on the older man's. “We’ll see what’s going on, sir,” he says with a nod before continuing down the hall with Benny behind him. As they get closer and closer to the apartment in question and the noise gets louder and louder, a blush starts creeping up Dean’s neck and into his cheeks because…Damnit, they definitely aren’t fighting.

Benny chuckles softly when he meets Dean’s eyes, but Dean just shakes his head and clears his throat before raising his fist to knock and knocking. The older gentleman stands in his doorway down the hall, peeking around the corner as Dean waits for the couple to answer.

He’s not at all surprised to see a half-naked and disheveled woman on the other side when the door swings open. With lipstick smeared up to her eye and down her chin, and hickey’s littering her neck, she looks properly taken care of, and Dean tries his hardest not to blush darker as he clears his throat to speak.

“Sorry to bother you, ma’am, but there’s been a complaint about the noise and we just want to make sure everything’s alright.” Despite his efforts, he feels his cheeks getting hotter and hotter by the second.

“Noise complaint?” She exclaims before looking behind her and muttering to herself, just loud enough for Dean to hear. “Jesus, I didn’t think we were that loud.”

“Um…yes, there was a concern about domestic violence? We’re here to make sure nothing like that is…uh…going on.” Benny chuckles beside him and Dean jabs his elbow into his ribs, feeling only a little satisfied when he grunts in pain.

“Oh, dear-y, the only abuse I’m being subjected to is the completely consensual kind. You know…everyone has their tastes. My boyfriend… He’s been gone for a while, but he’s back in town now and he likes a little spanking here and there, so—”

“Okay! Glad to know everyone’s safe, ma’am. We’ll uh…we’ll leave you to it, then.” Dean spins on his heel, just barely catching Benny’s apology for the disturbance as he explains what happened to the gentlemen. The words come automatically before he’s practically running for the car, desperately holding back his laughter until they’re both in the stairwell.

Then they’re roaring with it, tears streaming down their cheeks as they double over, their stomachs aching as they stumble to the cruiser.

“What the hell do we put in the report? Old man mistook kinky sex for domestic violence?” Dean chuckles as Benny wipes the tears from his eyes and starts the car.

“What d’you mean, it’s on me? I have seniority, Asshole!” Dean laughs, sipping his lukewarm coffee as Benny drives them back to the station to write their reports. The only thing Dean hates about his job is the fucking paperwork. Ah well, the faster he gets it done, the faster they can get back on patrol.

Dean loves these people. He loves every single one of them, even when they’re assholes. Sometimes he wonders how he can spend all day with them and still manage to enjoy their company for drinks after work. Especially Benny, who he’s with every minute of his working day. Jo, he grew up with so there’s really not much he isn’t completely comfortable doing around her.

And Charlie? She’s like the little sister he never wanted. A complete pain in his ass but he loves her to death—how could he not? Between the LARPing and sarcasm, she’s basically made for him, and, if she wasn’t into girls, he probably would’ve asked her out ages ago.

Then there’s Kevin. The genius little bastard whose biggest goal in life is to beat Charlie in computer programming. Dean kind of feels bad for him, actually. That kind of dream is pretty much unachievable.

He sits quietly in their booth, listening to their playful banter as he sips his beer and rests his head back, closing his eyes.

He tries to ignore it—that weight in his chest that just keeps pulling him down—but, there it sits, reminding him of the reality of his life. Of who he is and why this…this happiness…why it won’t last. He really does try, but somehow reminding himself that everything’s good doesn’t seem to be working.

So, yeah. This is his life, and it’s pretty great.

The oppressive weight feels heavier now as Dean closes the front door behind him with a soft click that seems far too loud in the dark entryway. He kicks off his boots and hangs up his jacket, not bothering with the lights as he navigates the halls, making his way to the kitchen for a glass of water.

As he sips from his glass, he peers at the little orange bottle of prescription sleeping pills sitting on the counter. He sets down his water and picks up the bottle, turning it ‘round and ‘round in his hand before reading the directions for the thousandth time. Take one before bed as needed. Do not drive or operate heavy machinery while in use.

He removes the lid and pours all the pills out into his hand…debates just doing it…decides against it…pours the pills back in the bottle. All except one. He downs it with his water.

His living room chair is comfortable, but he doesn’t really notice it as he pulls out his service weapon and lays it on the side table with his water, feeling the pit in his stomach open just a little bit wider as he stares at the dark TV screen, wondering…

He picks up the gun again, turning it in his hand and thinking…what would it be like? To have the weight lifted from his chest and out of his stomach. To feel nothing at all…what would that feel like?

He wants that—wants it so bad that he holds the gun to his head, pressing the barrel to his temple and feeling the cold ring of metal against his skin. He wants it, but not yet. He’s too damn scared. He scared…and he hates himself for that. He can’t pull the trigger and he hates himself for that even more. What if he can’t pull it for the job? What if that time finally comes, as it inevitably will…and he can’t do it? What if someone dies and it’s his fault because he couldn’t take the right life? But why does he get to decide what life is right to take? Who gets to choose?

Whose life is the right life?

And that’s his problem, because every time he asks himself that question, the only answer that ever comes to mind is, mine.