Spirit In The Night

The children won’t have enough to eat tomorrow. I should have worked harder last week, I ran out of money too fast. What can I do?

Darktown was rather noisy for the spirit, even at night when people usually let their worries go and escaped their problems in dreams. He’d made several stops already but now he crouched by a woman, lying on the floor of her tiny home with a child on each side of her. She was crying softly, trying to keep still and silent so she couldn’t disturb her little ones with her sorrow.

“It will be alright.” Cole said softly to her, her tears stopping as soon as she heard his voice. “You put in as many hours as you could. You always do as much as you can for them. Go to the docks in the morning. There’s a nice fisherman there with a red hat and he’ll give you enough fish for your family if you ask him.”

When she nodded and closed her eyes, he rose to his feet and left her to rest. They’d have food and the kind fisherman who just lost his wife would take comfort in helping them. Neither party would remember that they’d been visited by a spirit, but they would both be a little happier the next day. Cole wished there was more he could do for them, but for one night, at least he had helped.

There was so much pain in Darktown. Many more stops he could make before the night was over. But he was drawn to the healer’s clinic, where the anguish was so fresh and concentrated. He sought the source of despair and found himself beside the Healer of Darktown’s cot - it didn’t matter that the door was locked. When he was needed, he always managed to reach the mortals that were hurting.

He instantly recognized him for what he was - this man was a mage and an occupied one. Not by a demon, thankfully, but a spirit of Justice. He knew Justice may be aware of his presence even though his mage was asleep, but he wasn’t concerned. As he recognized Justice, Justice would recognize him as Compassion and know that he meant no harm.

Even in his sleep, he could hear the mage’s pain. There had been an accident that morning and several people had died. One was just a young boy. The good healer had saved so many, and yet it was all of those he lost that haunted his rest this night.

Cole sat down on the edge of his cot and put a hand on the man’s shoulder. Touching him allowed him to hear what was beneath the surface, beneath the recent tragedy of that day. He’d been in the Circle. He’d been tortured. He’d lost friends to Tranquility. The Wardens had made him get rid of his cat. He used his magic from dawn until dusk to help people, but none of that would matter when the templars finally had their chance to take him and make him Tranquil. There was so much suffering and in such a short lifetime.

He rarely touched mortals so intimately, but he found himself gently shifting the man up into his arms so he could cradle him on his lap. “You’re a good man, you know you are. You couldn’t save them all today, but think of the people you did save. Mothers came home to their children tonight because of you. Husbands are sleeping in the arms of their wives because of you. And the families of the people you couldn’t save are grieving with the knowledge that someone tried. Someone cared and made sure that they died with as much comfort and dignity as they could.”

He wouldn’t remember that anyone had been here to hold him. But the feeling of being cradled this way would linger when he woke. “Get some rest, Theo. You can’t help others if you don’t take care of yourself.” He knew no one called him by anything but Anders or Healer these days, but the more intimate use of his name might help him to remember how important it was to take a day off when he awoke.

After giving his hair one more stroke, he eased him back down onto the cot. There was one more thing that he could do for him and the idea brought a smile to his lips. A quick trip to a nearby meadow was all he needed and in no time at all, he was back at the clinic. He'd collected a mint plant that he knew cats loved and by the time he finished planting little clumps of them around the outside of the clinic, there were already a few stray cats coming around to investigate. By the time the sun rose, they would be lazing around the clinic and Anders would see them as soon as he opened the door for the morning. 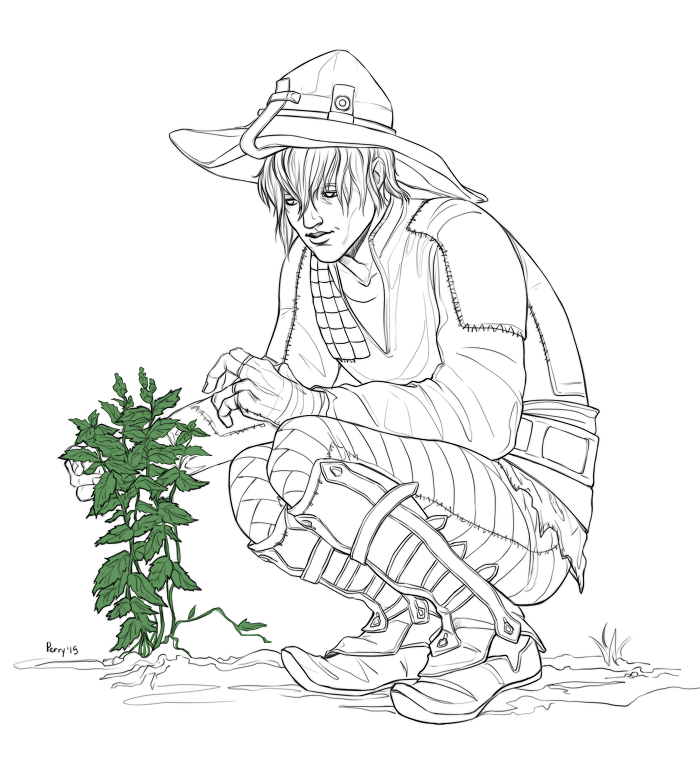 When dawn came and Cole had finished visiting the most distraught citizens of Darktown, the spirit finally found a place to rest. He sat down on a rooftop across from the healer’s clinic, a small smile on his lips as he waited for the door to open and the mage to see the cats. Anders wouldn't see him watching and if Justice didn't tell him they were visited by a spirit, he'd have no idea that the words spoken to him in the night were anything more than his own thoughts. That was fine with Cole. He didn't want to be remembered or acknowledged. If he saw the mage smile when he opened the clinic door, it was all the thanks he could want. He would know that he had helped.