Agent Alexsandr Kallus gets a ridiculous mission: investigate a boy band to look for a Rebel spy.
This isn't just any boy band. It's the Lucky Lekku, the most popular band in the galaxy, so popular that the Empire can't touch them.

So I've had this idea for awhile. If you read my other fic, Forces of Gravity, (minor spoiler) I was going to have Thrawn's daughter love Pop music. That's where I started thinking about Pop bands in Star Wars, what would happen if they had a band like N*Sync, and what if that band hated the Empire?
That's where this came from.

In my mind, The Lucky Lekku are like Starish from Uta no Prince-Sama (Japanese sub, cause that English version is real bad). Just look up one of those videos on youtube and have fun with that. 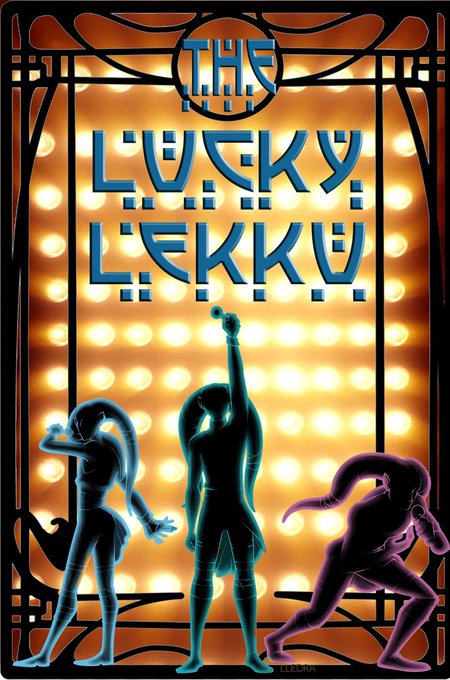 They were the Lucky Lekku, the greatest Pop band the galaxy had ever seen.

Three Twi’lek men gifted with their voices to spread messages of love and unity. Every night when they stepped out on the stage in sold out arenas, they were the center of the universe. Fans flocked to whatever planet they went to, causing mass chaos and pandemonium. Their screams could be heard for miles around, only drowned out by the sultry songs mixed with techno upbeat music. The Lucky Lekku danced their hearts out for their followers. The lights, the noise, the pacing, the love all around them.

Their songs once focused on spending a fun weekend with a girlfriend or partying until dawn. But now, their target was spreading love against hate, bringing awareness to the oppressive government and their harm to planets like Ryloth, and being a public voice for those too scared to speak.

They were a musical force to be reckoned with.

And the Empire couldn’t touch them.

Layne opened the door to the green room after another successful concert and picked up a towel to wipe the sweat from his forehead and lekku. He was careful not to mess up the carefully weaved beads that adorned his teal headtails. The costume designer had worked so hard on them.

“Are you insane!” Estin, the green skinned member of their group, stormed in just behind him. A bit of dark jade filled his cheeks as he huffed, “You can’t end a show by screaming ‘Take it to the bucket heads!’ You’re going to get us killed!”

“Come on,” Layne flopped back in a chair and snatched up the bottle of sparkling water on his nightstand. “It was just a saying and the crowd loved it.”

Their lilac third member, J.J., shut the door and crossed his arms, “I have to agree with Estin on this one. Some of those ‘bucket heads’ are part of our security detail to the next city. You can’t just say things like that.”

Layne rolled his eyes, “I didn’t realize you loved the Empire so much. Didn’t stop you from writing ‘Cynda’s Tears of Starlight.’”

Estin stood over him, “It’s one thing with J.J. writing music. It’s easier to hide those kind of things when it’s art. Art is subjective! I saw some crazy propaganda blog saying we were celebrating the Imperial power on Cynda. Whatever. Fine. If they want to think that way, fine. But saying something so blatant and invoking violence against the Empire is a completely different thing! You’re going to get us shot!”

Leaning far back in his chair, Layne glanced around him at J.J., “He’s being paranoid again.”

“He’s not the only one.” J.J. took his own seat and rubbed his eyes. “We should put out a statement about it.”

Layne snorted, “No. Having an opinion isn’t wrong.”

Estin turned suddenly towards the door like he knew someone was there. He always seemed to know those kind of things.

And moments later, the door flung open and there stood a tall Pau’an woman in her 70s, quite young for her species, teeth baring, and looking like a well-dressed nightmare. It was their manager, Kiyani, a legend in the music business since the days of the Republic. Deep red hues sunk into her white face as she slammed the door, “You idiots have some explaining to do.”

“Layne did it,” J.J. and Estin pointed at their bandmate.

Agent Kallus stared across the desk at Colonel Yularen in complete disbelief, “I’m sorry. Can you repeat that?”

Amused, knowing it wasn’t a normal request, Yularen sat back in his chair and stroked his mustache, “You heard me correctly. I would like you to infiltrate that music band, the Lucky Lekku, posing as a member of their security detail. After this stunt they pulled in their concert the other night, this kind of blatant disrespect towards the Empire cannot be tolerated. We have already received reports of some of their fans heckling stormtroopers, and one account of a trooper being attacked. Luckily, his armor protected him keeping him from any serious injuries.”

“With all due respect, sir, they do have an amount of freedom of speech in music that is protected by Imperial law,” Kallus stated firmly, though he couldn’t believe in the back of his mind he was defending a Pop band.

Yularen nodded, “Yes, but I haven’t told you the other half of your mission. We have noticed patterns in their previous and current tour. After their performances at some planets, small Rebel cells have attacked Imperial structures in the days after their departure. The attacks vary in the time after they leave, but it has happened on multiple occasions. We have reason to believe that someone in the band or their staff is a Rebel spy.”

“A boy band is a group of Rebel spies?” Kallus raised an eyebrow, not believing the words coming out of his mouth.

Yularen’s smile grew wider, knowing how ridiculous is sounded, “I know what you’re thinking, but we do have evidence from the last four years to support it. The attacks have ramped up in this current tour.”

“Why not just bring the accusations against them, have them arrested, and put them on trial then? No one is above the law.”

Kallus, so firmly set in his morals, Yularen thought. “Because of how wildly popular they are. If something happened to those Twi’lek boys, half the galaxy would riot. That’s why this is a reconnaissance mission first. If this is proven false, then those boys can continue to make their trash music all they want. But if one of them or someone in their staff is in fact a Rebel spy, then we must proceed carefully. A staff member can easily be arrested, but if it’s one of the band members themselves, then we must be careful. Are you up for the challenge?”

Kallus sighed heavily, leaning back in his chair. What a silly mission. He wondered if he was the first choice or if other ISB agents turned down this job. Who wanted to pal around with snobby music artists for months on end as security?

But he also understood the nature of this mission. He couldn’t deny the popularity of the Lucky Lekku. No one could even buy bread from the store without hearing their music playing. Somehow without trying, Kallus knew at least two of their names, pop culture imprinting itself in his memory against his will. He also knew how much money, influence especially on younger generations, and power this band truly had.

While it sounded stupid on the surface, Kallus understood the importance of this mission. Firmly, he nodded to Yularen, “I’m on it.”

This fic is now a podfic over on Jaig Eyes and Jedi podcast!
http://twotruefreaks.com/shows.php?show=49#4388