Sometimes, no matter how much you love someone, being with them just isn't right. But what wouldn't you give for it to be right? Can someone like Daryl learn how to swallow his pride and stop repeating the same mistakes over and over? Can someone like Beth learn to fight off her demons and allow him to get close enough to hurt her again?
How can they stay away from each other when it's all too easy to fall back into one another?

Picking a scab will leave a scar, but they both have so many scars already... what's a few more? 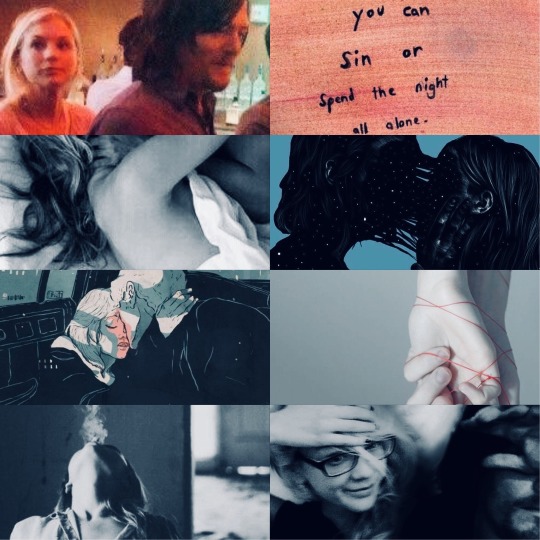 It was those big, blue eyes.

From the first moment he saw her, he knew he didn’t stand a chance. Those baby blues melted him into a puddle where he stood, wrapping a thick thread around both of his wrists that repeatedly dragged him back to her. And there was no way out of the stormy sea that her gaze had pulled him into.

They were hiding an awful lot of pain, though, those cornflower blues. Pain and torment and loneliness and anger. Maybe that was the other thread that had wrapped around his wrists and dragged him down into her personal abyss.

Or maybe it was the softness of her lips. Or the sweet lilt of her melodic voice. Or the smoothness of her milky white skin. Maybe it was the way her silky, golden hair tangled in his fingers. Or it might’ve been the way her body interlocked with his; the way that the sharp bones of her pelvis seemed to soften as they melded against his, or the way that the crook of her neck welcomed the side of his face and weathered it from harm. Maybe it was even the way she smelled… like lilacs on an early summer morning with the faintest hint of rainwater and freshly-mown grass.

Or maybe it was just the fact that both of their jagged, broken pieces fit together; that they didn’t clang or grind against each other, or pry apart in painful separation.

In actuality, and with every last harsh sense of reality that he was ready to accept, it was the comfort. It was the sense of home and familiarity. It was the soft and quiet voice that whispered to them both as his arms wrapped around her and her hips bucked up into his.

Even though, in a whole other sense of harsh reality, he knew that they were both the farthest thing from safe. Neither of them was home for the other. He had nothing to offer her but more pain. And she wasn’t willing to give him anything more than tepid doubt. Not anymore, not after everything. That much had been made clear.

And it seemed that she couldn’t either.

Or maybe she had no desire to. He began wondering to himself if she was some kind of sadist. But then he realized she was more like a masochist.

After a while, he’d decided she was somewhere in between both of those definitions. And consequently, so was he.

But goddammit, how was he supposed to just up and stop loving her?

He couldn’t. Nor did he want to.