Elio Perlman is a high school junior living in Brooklyn, New York. He works at a bookstore with his best friend, Marzia. After he meets Oliver, a handsome Columbia University junior, at the bookstore, Elio begins to question everything he knows about himself. The two begin a journey of friendship, love and self-discovery. 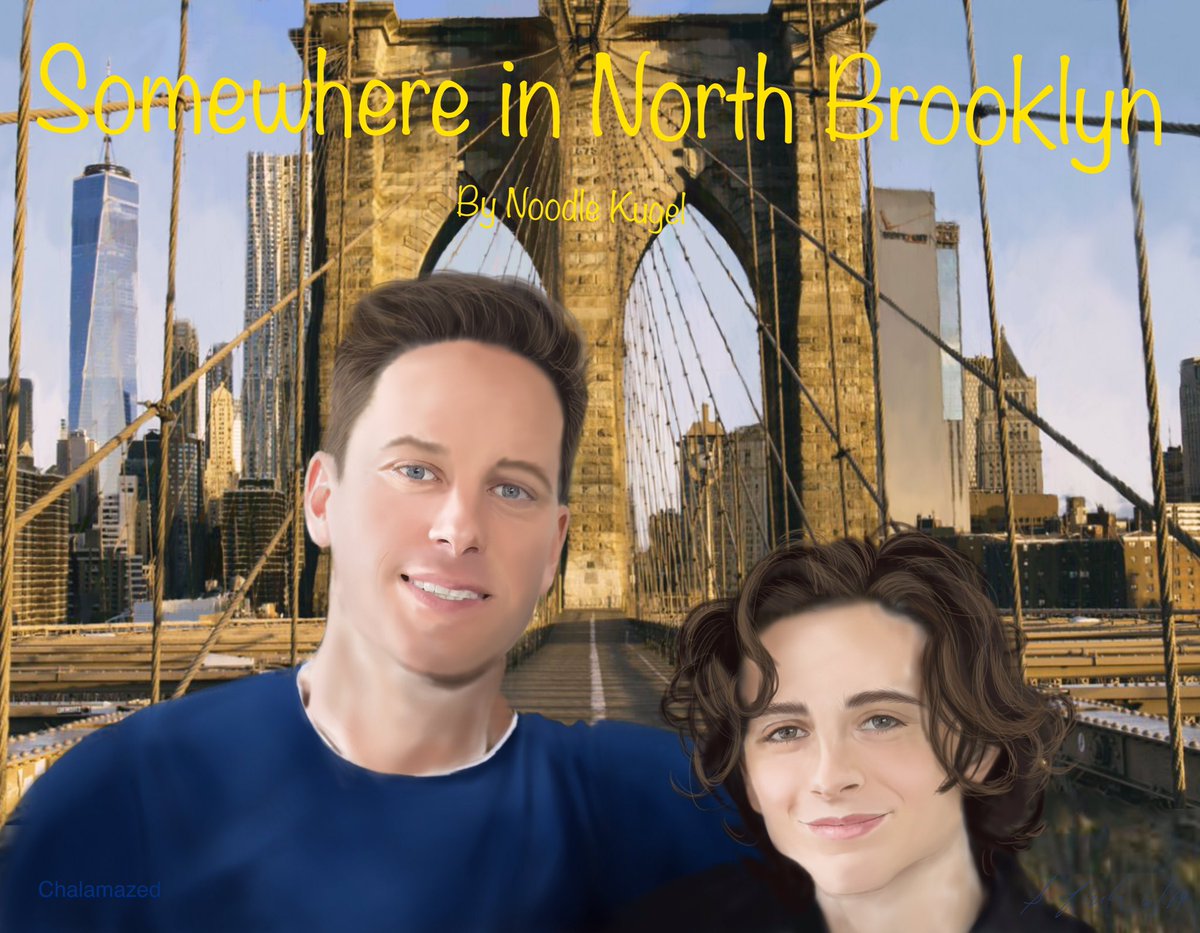 On this uncharacteristically warm February afternoon, Elio Perlman and his best friend Marzia stood in the window of Booklyn, taking down the Valentine’s Day display. Elio, a tall, gangly eighteen year old high school junior, attended Brooklyn Preparatory High School with Marzia. They worked together at the bookstore on weekends and some weekday afternoons.

They were in the process of putting up a display of children’s books about Barack Obama and Abraham Lincoln for the bookstore’s Presidents Day sale, when the duo noticed a tall, handsome stranger walk out of an Uber and into the store.

“Oh, the customer who just walked in is really handsome,” Marzia said from her perch atop a ladder, hanging red, white and blue streamers on the display. She was wearing a tight-fitting green sweater that handily displayed her curves, which did not go unnoticed by Elio. “If I wasn’t up here, I would definitely see if I have what he’s looking for,” she added suggestively.

“Elio, earth to Elio… come down here for a minute and assist the customer that just walked in,” their boss, Nia, shouted from around the corner.

“Sure thing, boss,” he said, climbing out of the window and walking toward the new releases section. The customer was even taller than he looked walking out of the cab. He was at least six inches taller than Elio, who wasn’t short himself, with broader shoulders, sandy blond hair that was messy from removing his winter hat, and piercing blue eyes. “Hi, welcome to Booklyn. Can I help you with anything?”

“Hi… Elio,” the customer said with a warm smile, gripping Elio’s name tag with his index finger and thumb, squinting to read the name hastily scribbled on it. “My cell phone died during my Uber ride, so now I’m going to need a book to read during my long schlep on the subway back to Morningside Heights. Got any recommendations?”

He stared at the customer for a second, sizing him up. What could he be interested in reading? “Are you looking for fiction or non-fiction…” Elio mimicked the customer, pretending to squint and read the brand name on his jacket, pretending it was a name tag, “... Columbia?”

The customer chuckled, a warm-hearted laugh that made Elio smile. “Oliver,” he said, extending his hand, which Elio happily shook. “Though, coincidentally, I do go to Columbia.” Oliver released Elio’s hand and said, “Fiction, I guess. Something with a gripping story that will make me forget I’m going to have to take the train through three boroughs just to get home, thanks to the L train shutdown.”

“Got it. Interesting, long read, fiction. What about The Underground Railroad by Colson Whitehead?”

Oliver leaned on the book shelf and grinned. “Already read it. What else have you got for me?”

“Read it, and read it. But great recommendations, I like your taste. What have you read recently that’s more obscure or a little older?”

Elio scratched his head, thinking about the books he’d read recently. Having grown up in Italy speaking Italian, French and English at home, not everything he read was in English.

“Hmm… What about The Art of Fielding by Chad Harbach? Have you read it? That one’s like nine or ten years old by now.”

Oliver shook his head. “Nope, never heard of that one. What’s it about? Wait… don’t tell me. I think I’ll blindly trust you on this one.” For the next ten minutes, they stood in the corner of the aisle, discussing their favorite books. Elio was pleasantly surprised by how well-read Oliver was.

Elio led Oliver to the register and rang him up. As he was scanning the book, Elio asked, “So, what brings you to Greenpoint, in an Uber, with a now dead phone?”

“I was working on a paper that’s due this week and needed a break, so I decided to come out here and treat myself to some pierogies. I took a cab here because, well, the subways are a mess. I’ve been craving the pierogies my bubbe used to make when I was a kid, and I wanted to get some authentic Polish food rather than something frozen from Trader Joe’s. When my phone died, and I saw this bookstore a few blocks from where I was going, I asked the driver to let me off here instead,” Oliver said.

His bubbe? This tall, blonde guy is Jewish? Elio thought. “Where were you planning on eating?”

“My very quick research on the internet said to go to Kowalksi’s,” Oliver said. “Why, is that place bad?”

Elio shook his head. “No, it’s good, but I know a place you’ll never find on the internet that has even better pierogies.”

Oliver raised his eyebrow. “Oh? Care to share, or do I need a secret password to get into this exclusive pierogi club?”

“It’s a bit complicated to find, is all,” Elio said. “I get out of work in thirty minutes - if you have time and aren’t starving, I can take you there when I clock out.”

“I’m avoiding writing this paper, so I’ve got nothing but time. I’ll go sit at the table over there and read. Grab me when you’re done,” Oliver said.

What was Elio doing? Why did he offer to go with this stranger to his secret food stand? Something about this Oliver intrigued Elio, and he was dying to learn more about him.

Elio was born in New York, when his father was a post-doctoral student at Columbia, but the family moved to Italy, his mother’s home country, when he was a toddler. They came back to the States when Elio was ten, so that Professor Perlman could take care of his ailing father. Though Elio’s grandfather had passed away several years ago, his father enjoyed his teaching post at New York University, and the Perlmans stayed in New York, spending their summers at the family villa in Italy.

The boy’s transition into American life was not an easy one. He was shy, and had a difficult time making friends and acclimating to American culture. His first year in a Brooklyn public school, he refused to communicate in English (despite perfect fluency), he fell into a deep depression, feeling alone in a place that didn’t feel like home, and his parents pulled him out of school for the rest of the year. The next year, his parents enrolled him in a private school with better counselors and smaller classes, in hopes that Elio would have a better time adjusting. Unfortunately, the school made him take the fifth grade once more, as he had not completed the year, making him a year older than the rest of his classmates, and thus, he turned eighteen during his junior year instead of his senior year.

Elio was given the desk next to Marzia in their fifth grade classroom, since she also spoke Italian, having spent her formative years being nannied by her Italian nonna when her parents were at work, and their teacher thought she would be able to show him the ropes. The two were fast friends, and soon became inseparable. Marzia helped Elio through his first year at Brooklyn Prep, introducing him to new friends and to life in the city, and Elio was Marzia’s rock during her parents’ divorce. Though their classmates think they are dating, and they were each other’s first kiss and occasionally fooled around when they were bored, they both considered their relationship grounded firmly as best friends and nothing more.

When they were in the sixth grade, their duo became a trio, when a new student, Chiara, enrolled in their school. They were the ‘tre amici’ through junior high, three close friends who told each other everything and did everything together. As they got older, they were still close with Chiara, but as her popularity (and chest) grew, she made new friends, too. Chiara always made sure to include Elio and Marzia, and the two still loved her, but Chiara was a social butterfly, whereas Elio and Marzia were content with having just each other.

"Thanks for leaving me hanging, literally," Marzia said, still on the ladder hanging up patriotic decorations.

"Sorry, Nia told me to help a customer, and I had to ring him up." Elio picked up a marker and began drawing a picture of George Washington for the display. He loved this part of the job, the chance to do something creative and make some art for the windows. He loved when people posted pictures of his displays on Instagram and they went viral.

"What took so long? It doesn't take that long to find a book."

Elio shrugged. "Dunno. He'd read everything I'd already suggested. Took a while to find a book."

"So, didya learn anything about him in the twenty minutes you were with him? What's his name? Is he single? I haven't hooked up with anyone since Ethan and I broke up in December, and I don't want this dry streak to continue."

"His name is Oliver, he goes to Columbia, and he likes to read. And he's Jewish, I think." Elio said.

"Oh, a college boy! Maybe I should go over and talk to him..." Marzia said.

Elio couldn't figure out why the thought of Marzia going over to talk to Oliver infuriated him, but he didn't say anything. "If you want, but we need to finish this display before my shift is over."

"I guess you're right. Hey, hand me those scissors?" she said, trimming some ribbons.

"I can learn more for you after work. He said he's looking for good pierogies and I offered to take him to Agnieszka's, since he won't find it on his own."

"Oh! Yes, be my wing man! Hype me up! Then you can introduce me to him!" Elio nodded, but became irrationally angry at the thought of setting Marzia up with Oliver.

Elio kept looking toward the back of the store, watching Oliver as he read. He checked his watch, saw he had two minutes left in his shift. "I'm heading out, but I'll see you at Chiara's party tomorrow?" Elio said.

"See you later!" she said, giving him a kiss on the cheek.

Elio clocked out, grabbed his coat, and went over to Oliver. "Are you ready for some life-changing pierogies?" he asked.

"I'm ready, let's do this," Oliver said with a grin. Life-changing, indeed.

Cover art was made by the amazing @chalamazed on tumblr and twitter!

Thank you so much for reading! I can't wait to share this story with you - this is going to be fun and fluffy, with some twists and turns along the way.

I decided to make Elio 18 to avoid any weird consent issues. Figured it just makes the story a little easier, even if he is still in high school. There will be a lot of scenes at the high school and at the university, so lots of fun modern school things to look forward to!

If you're unfamiliar, pierogies are Polish dumplings. They are delicious. The bookstore Elio works at is fictional, but it's located in Greenpoint, which is the northernmost neighborhood in Brooklyn. It's across the river from midtown Manhattan, and just south of Queens. It's got a very large Polish population.

I'll try to explain the NYC nuances and various ethnic foods I mention as they come up. Elio and Oliver are both foodies.

Let me know what you think, or if you have any comments/questions/suggestions!