It’s really Derek’s luck, though, to start developing a crush on someone who apparently hates him.

Everyone at the new coffeeshop gets personalized foam art. Derek always gets a dick drawn in his.

archiving more tumblr fic! this was a gift to tay!

Derek isn’t one for fancy coffee shops. He buys his coffee by the bulk and makes it at home, brings a thermos to the office with him. He has a morning routine down pat, drives to the office, parks in the regular lot, sips his boring, normal, coffee in the elevator as he rides to the eighth floor where the firm Boyd, Reyes and Lahey, Attorneys at Law resides.

He’s still proud that he’s finally gotten his name off that damn sign. The firm has had a Hale attached to the name forever, but Derek’s glad to be passing the legacy on.  It’s wonderful.

Derek knocks on Erica’s office, frowning when there’s no answer. He opens it to find it empty and scowls. He walks to Boyd’s office, and finds it empty as well. He spots Mike, Isaac’s assistant coming out of the elevator and directs a question at him. “Where are all my lawyers?”

“Erica and Boyd too?”

Mike is texting furiously. With Erica’s or Boyd’s assistant, probably. “Ah, they’re having a coffee break?”

He goes back to work, and notices when Erica arrives at precisely ten thirty six am, stalks to her office and intends to lecture her, but no sooner than he opens the door than something steaming is pushed under his nose.

“Magic,” Erica replies. “Come on, I got it just for you. It’s from that new place down on the corner, they’re really awesome. Plus if you don’t get it to go they’ll add like, personalized latte art for it. The guy behind the counter’s amazing. He drew me a Catwoman.”

Derek takes a sip of the coffee— no, a latte— and is instantly transported. It’s light and frothy, slightly sweet and caffeinated, and heavenly. Derek might be in love.

Erica takes his attention away from his new favorite thing to show him a picture of three lattes with rather lovely art— one has a Catwoman, another has what looks like— well, Isaac, bundled up in his morning scarf, and a pair of ice skates. Derek takes a moment to be impressed that the barista took the time to personalize each cup. How long have they been going to this coffee place anyways?

“I thought Isaac was with a client.”

“Oh, he was,” Erica says, flicking through her phone. She shows Derek another picture of Isaac sitting at a table with the all the relevant players in the Hartwin case. They each have a coffee.

“Fine. Well. You’re a partner now, your name’s on the building, you can’t walk in an hour late everyday,” Derek admonishes.

Erica grins. “Oh, come on now, I can totally. And if you’re gonna do the ‘you’re partner’ thing, what are you still doing here?”

“Thought you fired yourself.”

“I’m still a consultant! I thought you needed me.”

Erica’s laugh is high and merry. “Oh, boss— do I still call you boss if you fired yourself? Oh, whatever. Look. If I need to consult with you, I’ll call you in. Otherwise, enjoy your early retirement. Go home and ride your motorcycle around. Get a dog and spoil the hell out of it. Date someone, I don’t know.”

This is how Derek finds himself pushed out of his own damn law firm, with nothing to do for the rest of the day.

He drives home and changes out of his suit, into a pair of old jeans and his leather jacket. He takes his Harley out of the garage, and finds himself smiling despite himself. Erica does know him well, knows that he denies himself the leisure of his favorite hobbies.

He takes the bike for a drive through the mountains, having fun on the winding roads before heading back to town. He drives past the law firm, hoping Erica can see him through the window, so she knows he’s following her directions.

On the third loop past the law firm he notices the new coffeeshop on the corner. That must be where Erica got this coffee she’s so excited about.

Luckily there’s even an empty spot, right in front of the shop, just off the street. Derek pulls his motorcycle in, parking it neatly in the center of the parking spot. He pulls off his helmet and is about to walk into the shop when he hears a loud honking behind him.

There’s a ratty blue Jeep with the signal on, apparently waiting behind Derek to pull into the spot. “Hey!” the driver shouts. “You’ve got a small motorcycle, go park in the alley! It’ll fit there!”

“I got here first,” Derek says. “And my Harley isn’t small.”

Derek just ignores him, and walks into the coffeeshop.

It’s decorated with warm, soft colors and a mixture of squashy armchairs and tables, filled with people enjoying their coffee slowly, reading newspapers or on their phone, people working away on laptops.

There’s no line at the counter, but Derek recognizes the Kira Yukimura, lead prosecutor in one of the other leading firms in the city, waiting patiently for her drink. The barista is drawing something slowly in her cup, looking up as he finishes the decoration.

“Oh, Derek! How are you?” Kira asks, spotting Derek on her way out. They make small talk for a little, and Derek gets Kira’s recommendation on scones, while he peruses the extensive blackboard menu on the wall.

He’s finally made a decision when the back door of the coffeeshop bursts open, and a guy walks in, panting, carrying a number of boxes. He steps behind the counter to join the other barista. “Sorry, Scotty, some asshole took my spot and wouldn’t move his midlife crisis motorcycle to the actual motorcycle parking, so I had to park across the street and carry all the—” He freezes, standing there as he puts on an apron, staring at Derek. “You.”

“Uh, me?” Derek stutters as he stares into warm brown eyes. “So, that was you in the blue Jeep?” He means to apologize, he really does, except Derek’s terrible at it, he doesn’t know how or where to start, but he wants to, all he has to do is say—

“Did he order yet,” the guy says curtly to Scott.

“I’m making your drink. What will you have today?” The guy— Stiles— says, voice overly sweet.

And then Stiles whirls away to work the machine, turning his back to Derek.

Scott shrugs and rings Derek up. “Don’t worry about it.”

“Okay…” Derek still wants to apologize, but it looks like Stiles is busy making his drink.

Now that he isn’t hidden behind the windshield of his car, Derek’s kind of blown away by how… attractive Stiles is. Maybe it’s the angry way he goes about pressing levers and pouring things, or the way he sticks his tongue on in concentration, or the graceful way his fingers dance around the machine…

It’s really Derek’s luck, though, to start developing a crush on someone who apparently hates him.

Derek approaches the counter and looks at his drink.

[Image: Latte with foam art of a dick.] 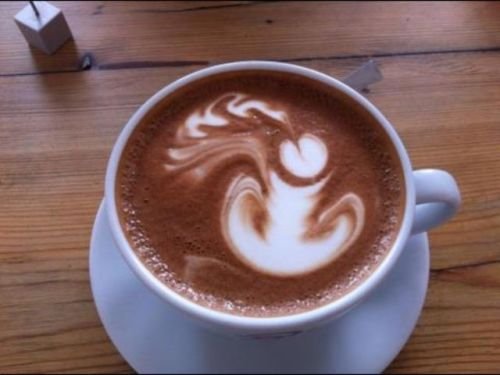 He picks out a table, and solemnly drinks the mocha. It tastes amazing, and he doesn’t mind that Stiles drew a dick on it. It’s kind of funny, actually, and he deserved it.

Derek keeps coming back to the coffeeshop. Maybe it’s because it’s conveniently close to his firm, or that his friends also like it, or because he thinks the drinks are delicious and the sandwiches are quite good too, or he admires the “pay it forward” thing that Scott and Stiles have come up with— customers can purchase meals ahead, and the item will get written on a post it, and anyone hungry can come in and pick up the meal and take it for free. He really likes the place, okay? It’s got great food, great goals…

Apparently Stiles and Scott both made their fortunes in Silicon Valley, with some huge web app developing thing, and then elected to build a coffeeshop. They take genuine interest in the people that come in, and build relationships with all their customers.

They have conversations now, now that Derek stays late, hanging out on his laptop at the coffeeshop until it closes. He parks his motorcycle in the alleyway, and asks Stiles about the music that’s playing on the speakers, and they argue about Marvel vs DC and how much chocolate should go on a croissant, and Derek’s heart leaps a little every time they talk.

One morning Derek orders his usual, picks out a table and reads the paper until Stiles says, “Order for Derek!”

He picks up his drink and stops, staring at the cup.

Maybe it’s too time consuming. He steals a quick glance at another customer’s cup— but sure enough, that guy has a Superman logo in his, and that girl has a wolf— what gives?

Derek sets the cup back down on the counter and pushes it towards Stiles. “What is this?”

“But you always give me a dick. Where is it?”

Stiles blinks at him. “So you do notice. Man, you’re so difficult to read. I mean, I started it because I was mad at you, and then I kept going because it was funny, then I got to know you and like.. you never brought it up? So I figured like, yeah, I know you apologized awhile back about the parking spot thing, but then like, you said that awful thing about Batman, so I just had to, but then Scott was telling me how juvenile it was and I should just… I mean…” Stiles blushes. “It would be more professional to give you a normal drink.”

Stiles stares at him before he breaks out in laughter. “Really?”

Derek blushes. “I thought maybe you could have been… flirting.”

“Wait, really, you like, oh my gosh, yes? All the yes to the flirting? Here, give me that cup—” Stiles grabs Derek’s cup, refills it with more foam, and hands it back to Derek.

Derek tilts his head, confused. “This is still… a blank cup. You didn’t draw a dick in it.”

“I can give you the D later,” Stiles says, and winks.

Thanks for reading! I'm on twitter, tumblr and pillowfort if you wanna say hi!