A disaster perpetrated by a renegade Time Lord finds the Doctor being forced to work with his past selves to resolve it. This Time Lord has not only placed his very existence in jeopardy, but also Time itself. The Doctors may be a bit in over their heads with this one, but the help of a certain companion surely can't hurt. Takes place during (and is a slight reworking of) The Three Doctors. Third story in the Time With a Twist of Tartan series.

Not my characters, except for Kathryn. This story is for entertainment purposes only. No copyright infringement is intended. Once again, it's unbetaed, so any mistakes are mine and mine alone. I'd read that Jamie was originally supposed to appear in The Three Doctors, but Frazer Hines couldn't make it as he was busy with Emmerdale Farm at the time. I'd often wondered how Jamie would fit into the story. I thought it would be fun to explore that within the universe I'd set up in this series. 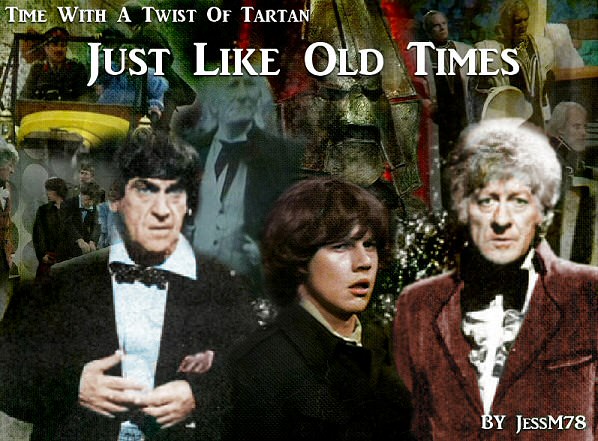 Sighing, Doctor Tyler piloted his Land Rover over the bridge to the entrance of the Minsbridge Wild Life Sanctuary. He'd just been notified by a Mrs. Ollis that the payload from the weather balloon had landed. Of course it was important he get down there straight away. This device was pertinent to his research and if anyone had toyed with it … Well, he didn't want to think of the consequences. Nothing deadly, of course. But if it had been tampered with, it'd probably set him back quite a bit. Plus, it still wasn't something for public consumption …

Coming to a stop at the entrance, he turned off the ignition and hopped out of the vehicle. A middle-aged woman in a dark gray dress and lighter-colored cardigan stepped up to meet him.

Tyler nodded. “Sorry to be a trouble. Thanks very much for calling.”

“Oh, no trouble at all. Arthur's keeping an eye on it down by the lake. He hasn't touched it.” Tyler inwardly breathed a sigh of relief. “It's not chemicals, is it? Only the birds, you see.”

“No, you'll be all right,” he reassured her. “Nothing to worry about.”

“Oh, good,” she replied with a slight smile. She then gestured across to the lake where he could faintly make out a balding man with a mass of curly, ginger hair kneeling down, appearing to examine the box.

Giving Mrs. Ollis a quick nod, Tyler hopped back inside the Land Rover, driving around the lake towards the man.

He had just reached the area when something made him do a double take. “What the …?” He was sure he'd seen Ollis just a second ago, and he was now gone. That in itself might not be so odd if the man's disappearance hadn't been preceded by a strange, bright flash of white light, almost like lightning.

Recovering slightly, Tyler slowed to a stop and parked the Land Rover along the edge of the grassy border. Exiting, he examined the area in search of the man.

Tyler combed the area backwards and forwards, but the man was nowhere to be seen. He'd even lingered a few minutes, wondering if the man had taken off for some reason and was coming right back. It still didn't make sense, though. He'd just been there, right in front of his eyes. And then there was that bright flash of light. It was as if the light somehow … zapped him away. Tyler couldn't help rolling his eyes and scoffing. The whole thing seemed so far-fetched, or at least it should to someone such as himself.

Still, the fact remained the man was missing. He needed help in figuring out what was going on. Fortunately, he knew of one group that could possibly help.

Finally collecting the box, he returned to his Land Rover and got on the radio.

“Put me through to UNIT HQ, will you please?”