A collection of my analysis or just plain and simple observations, originally posted on tumblr.

Taking into consideration what's currently happening to tumblr, I figured it's about time to archive at least some of my meta content, if for my own convenience only. 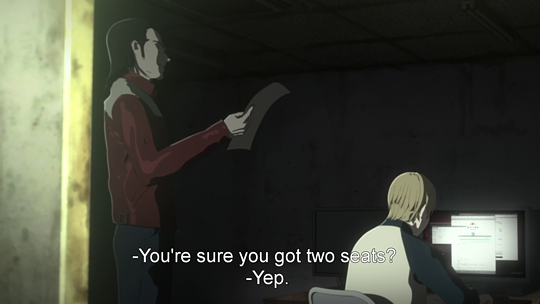 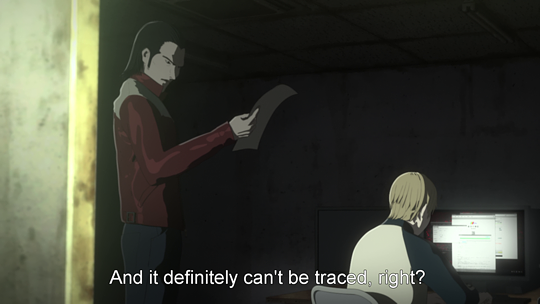 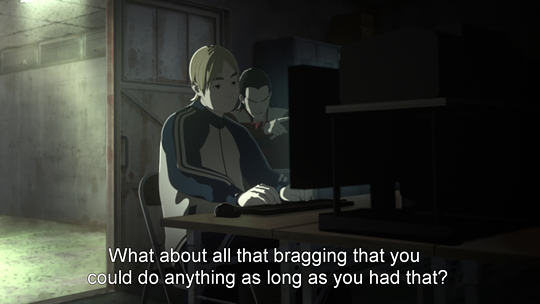 Oh my. Tanaka can be such a pain sometimes. Points to Okuyama for keeping his cool and not taking the bait for the most part. Having Tanaka, basically an ignorant amateur, hover over him and question his competence in his area of expertise - time and again - must have been at least a little aggravating. In retrospect, it’s funny how Tanaka complains about finding him a difficult person to get along with, like… Are you sure it’s Okuyama’s attitude that’s the problem? Are you really really sure?

For that matter, when the others join the team, he doesn’t hit it off with them right away. He can be civil with them but mostly keeps to himself. 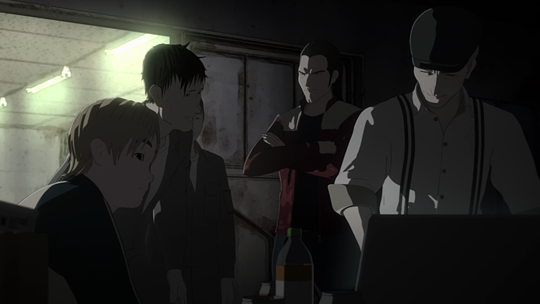 He listens to what others have to say, but he himself doesn’t contribute to the discussion. 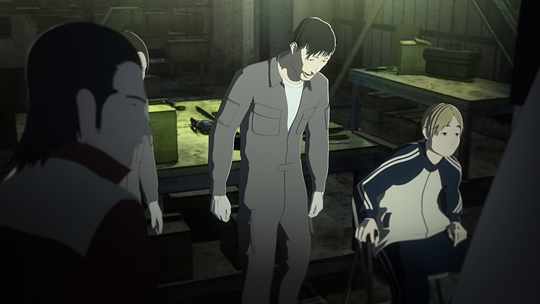 Again, he doesn’t exchange a single word with them. He does try to earn extra points with Satou though by finishing his sentence for him and then proceeds to kinda smile at him, stop being so cute. Not the first time and not the last he quotes him word for word, proving he always listens intently. 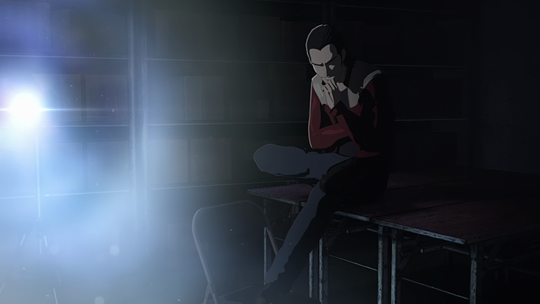 Staying on the sidelines, once more. Probably lost in thought, imagining everyone who wronged him meeting an untimely end soon, and who can blame him?

To be fair though, they didn’t exactly leave the best first impression on him, considering their first interactions consisted of pointing out his faults. 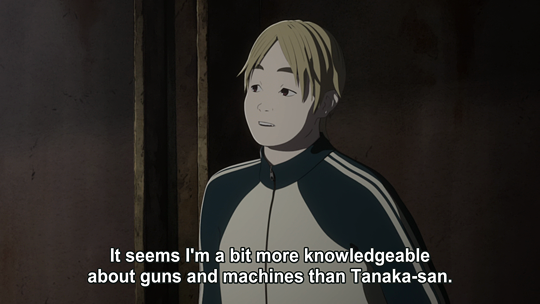 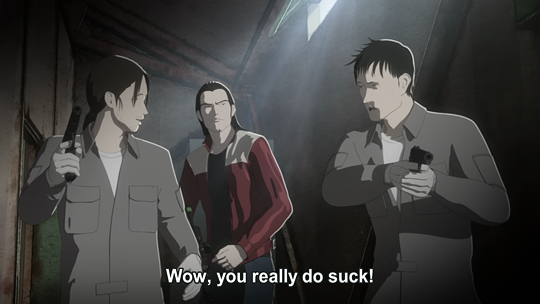 It’s no wonder, in the beginning, he feels inadequate and inferior next to them - Okuyama with his intelligence, knowledge and computer skills, Takahashi being a natural at shooting, Gen who got a steady head on his shoulders. How is he supposed to compare? At this point he’s still lacking in self-esteem, so he immaturely lashes out in the only way he knows how - by trying to put others down.

As a result, it takes him a while to warm up to them. But he grows as a person, gains more confidence acting as a second in command and eventually lets his barriers down around others. 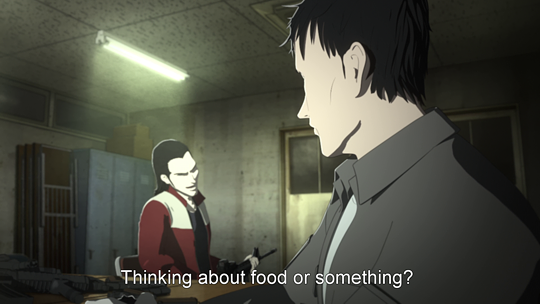 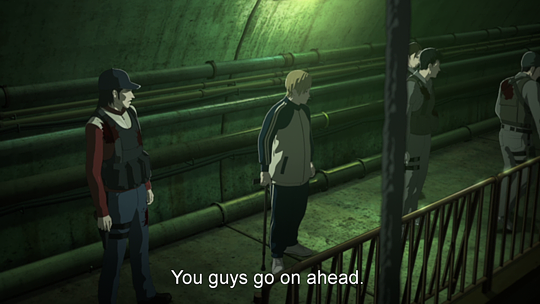 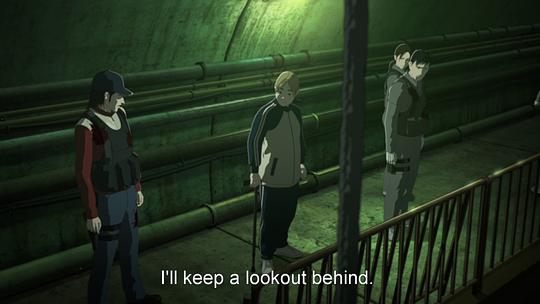 I wonder why he lied to them. Was he still on a fence? Was he afraid they’re going to try talking him out of it? How long did they wait for him before accepting he isn’t coming?

I think that’s why Takahashi’s shown being pissed at him later. It’s not so much Tanaka’s decision about staying behind, as the lack of trust on his part in not sharing it. After everything they went through together, surely he owed them that much, they’d earned it. 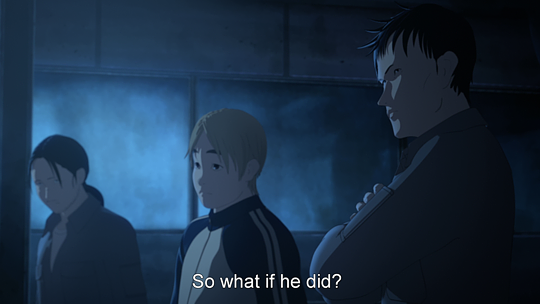 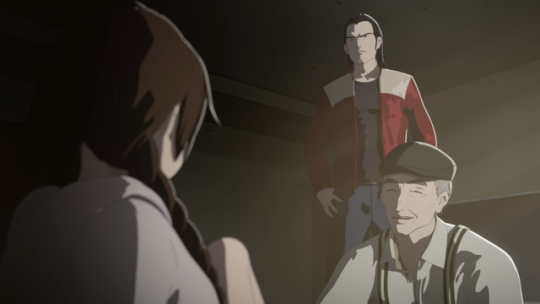 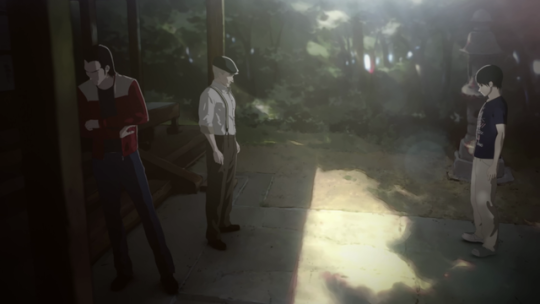 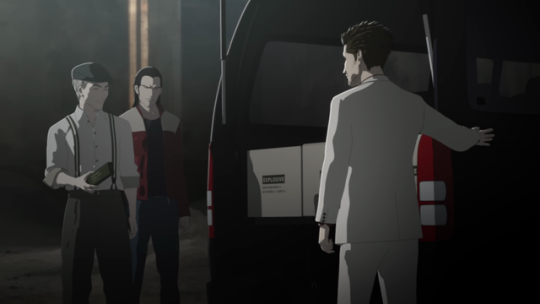 Tanaka and his tendency to just hover in the background, always doing his best to look intimidating.

That exchange with the Yakuza is particularly striking… Everyone’s making themselves useful. Satou’s in charge of the transaction and handling small talk, Gen and Takahashi are carrying the goods, Okuyama’s sharing his expertise, while Tanaka’s just standing idly on the side.

Tanaka: And I will play the role of your bodyguard, Satou-san.

Satou: Uh, I appreciate the thought, but that won’t be necessary. Nekozawa-san-

Poor guy is still feeling pretty inadequate and insecure at this point in time, so he’s overcompensating in different ways. 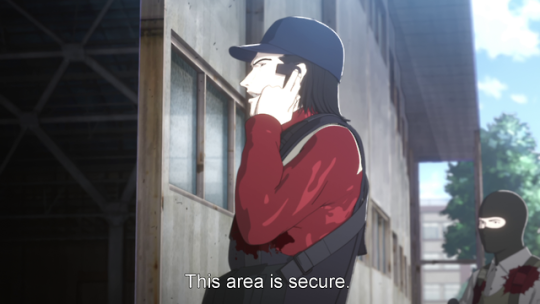 He sounds so content and accomplished during this scene, outright joyful, you could say. Just brimming with pride at his own achievements until now, there’s no more hesitation or self-doubt to be found in his voice.

Such a short scene, it’s easy to overlook, but it manages to successfully capture the not so subtle changes Tanaka’s character went throughout the show without being too obtrusive about it.