A collection of my Peter Rumancek Imagines and short prompts consisting of smut, fluff and angst. 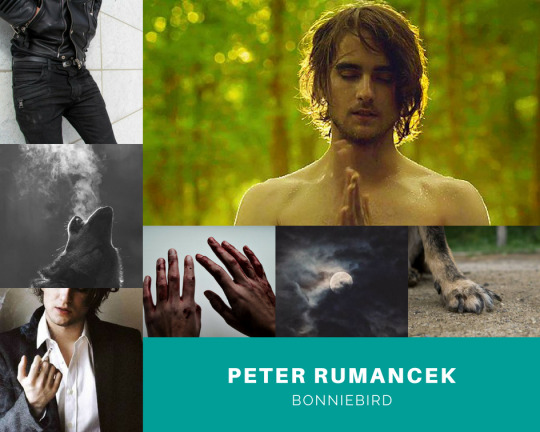 “Peter I need a favour.” You called as you climbed into the garden.
“What is it?” He asked opening one eyes as you lent on the hammock.

“There’s a store in town that’s getting new stock in and I want some of the clothes.” You told him.
“Well have you actually looked into this job because the last one nearly got us both arrested.” He chuckled when you stared off into the distance as you hummed. “Ok I’ll look into it just make sure you’re back here at dark.”
Lynda came home to find Peter sat on the steps by the road and frowned, glanced at the road, and nodded. She knew you well enough, you wondered, you maybe stayed in one place a day or two but never longer than a week.

“She’ll be late.” She warned him and he chuckled.
“I told her at dark, that isn’t a specific time.” He pointed out and she shook her head.
“Need to put a tracker on that girl, I’ll see you both later, make sure she knows we have some food for her.” Lynda smiled and waved him off as he waited.
“You didn’t say when I had to turn up, and I didn’t feel like it.” You sighed.

“Yeah, yeah, hop over the fence KittyKat and open the side door.” He boosted you over and you quickly opened the door.
He slid through with the card he got earlier and swiped in, shooing you through so he could distract the guard with his “ID”.
“You got ten minutes, chuck them out the window over there they should land by the car.” He pointed to the window where he’d insisted in parking the car.
“Ok make sure you grab some good stuff to.” He hissed and went back to distracting people.
By the time, you‘d both gotten out, you had almost been caught twice, but Peter seemed pretty pleased with what you found.

“All right let’s get this stuff home, by the way good job, better than the last time.” He winked at you as he pulled the car out of the carpark, stopping a few miles down the road so he could put the licence plates back on. “(Y/N)?”
By the time, he’d gotten back in the car you’d vanished with what you needed, he was pretty sure you’d cut through the woods to where ever you were staying but he still turned back a little just in case.
“You’re home, how did it go?” Lynda asked and Peter dumped what you’d left in the living room.

“She left before we got far.” Peter muttered and she hugged him in one sweeping motion.
“She’ll come back when she’s hungry.” Lynda cooed before heading into the kitchen to fix dinner for Peter.
“I guess but I just wish she’d hang around for a little longer, don’t you worry she’s going to get caught up in something?” Peter sighed.
“She’s a smart girl, always lands on her feet.” Lynda smiled when he nodded.
“I guess.” He grumbled and reached for the ashtray on the coffee table in front of him.