The Azure Brotherhood has lived for millennia, and exists for one purpose: to rid the world of those who haunt the darkness, stealing whoever is unlucky enough to be caught in their sights. Their top agent, a young mammal as skilled as they come, is sent out on a routine mission, or at least, that was how it began. The only question now is, which side will win?

This story is modeled after the 2004 Van Helsing movie and its animated prequel, The London Assignment, both of which are completely freaking awesome and deserve way more attention!

Cover image was done by Ake'cheta for ZNN's Halloween Fanart contest, is he awesome or what? ^.^ 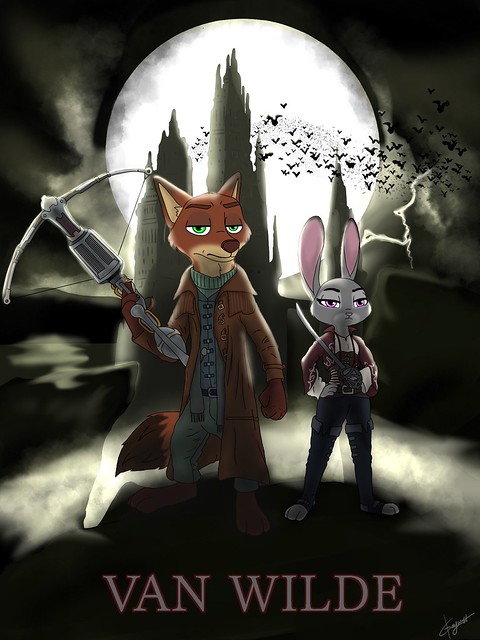 Book I: The Capital

She’d always hated being outside when the wind was howling, the cramped, filthy streets lit more by the full moon glowing coldly overhead than the street lamps, with their small, sparse, guttering flames. The thick, broken clouds drifting constantly across that white, eerie face didn’t help, leaving her cloaked in bitter shadow more often than not. The ragged hem of her worn, tattered dress was soaked from tramping through mud and puddles, while she searched the deserted district for her father, as violent and harsh as he was. Anything was better than being trapped in the chill and mist for the night.

She gasped, whirling at footsteps behind her, seeing nothing but a narrow, fog-choked alley.

“Hello?” she demanded nervously, the words echoing slightly. She scanned the cracked cobblestones, the hair on her neck standing at the lack of answer. Just noise from some drunken mammal at the other end of the street. “Hello?”

She jumped at a loud clatter, her frazzled nerves sending her nose and tail twitching as she focused on a toppled rubbish bin. Just one of the many scaled creatures that wandered the city, starving just as the mammals residing there did. She sighed in weak relief, watching the bow-legged thing bolt clumsily away, deeper into the maze of side streets.

She chose one scarcely more well-lit than the rest, delicately taking her dress in her fingers, lifting the skirt above the flooded gutters as she had seen high-born ladies do, whilst out strolling in their fine clothes with their fine husbands. Stopping again at the sound of a carriage, the soft hiss of steam as the driver engaged the breaks, she was relieved to finally spot a close figure. Tall, well-built from what she could tell, with a dark cape to shield him from the chill.

“Oh, Daddy?” she started after him, hurrying her pace when he turned the next corner. “Daddy?”

She paused at the mouth of another alley, hugging herself from the cold as she searched for him, turning when a shadow loomed across her from behind.

A large hand, coarsely furred and stronger than any she’d felt before, clamped across her mouth, muffling her frantic screams, her own small fingers useless as she gripped at his thick wrist. He hoisted her easily, chuckling darkly all the while, holding her against the rough, damp wall of a building. She tried to claw, tried to bite, her thin, weary legs kicking feebly. Her eyes widened at the scrape of steel against fine scaled leather, her blood running like ice through her veins as her vision locked on the long, shining blade. She made one last attempt to scream, as a burning sting whipped fast across her neck, and she felt the heat of her blood start to flood from her.

Her last sight before the world went black was a deformed, hideous face twisted in the widest and cruelest of grins.

He laughed as the girl finally ceased her pointless struggling, her small body twitching as the last spasms of life rolled through her. Tucking the soiled weapon away, he pulled a small, ornate glass chalice from another pocket in his shredded costume, a small price to pay for the greatest of rewards. Sensing that which it was designed to contain, the top of the vial lifted of its own accord, pulling his hand hard to the source; the girl’s listless, gaping mouth.

He uncovered her face, watching in silent glee as a pale, shifting mist spilled from her dead lips, drawn toward the enchanted bottle. Once filled, the container sealed itself, trapping the prize within; it was quickly put away, lest some hapless soul see. Chuckling again, he let the empty, useless vessel fall, watched as it slumped to the filthy ground like an unwanted doll. Scarlet blood shimmered faintly as the moon peered from behind another cloud, soaked into the pale, brittle fur of her skinny breast, hollow amber eyes staring blindly up at the star-studded ebony heavens.

He stole silently away, ducking into the dank, filthy sewers that stretched and wound beneath the sprawling city, hearing the various shocked noises that arose from those creatures who called the vile tunnels home, the clicking patter of many fleeing footsteps as they scattered from the dull light spilling from the vial, now held aloft in lieu of a lantern. An especially crude use of such a treasure, perhaps, but a necessary one, if he was to keep himself discrete.

The shadows assisted in keeping his flight hidden, once he’d reemerged onto the streets, the vile smells that clung to him keeping any who would have questioned him at bay. It wasn’t long before things were to begin, and there were still many preparations to see to, the first of which was the procurement of new garments. These tattered rags would never do for his destination, or his audience.

I can feel it beginning…

He hurried the rest of the way, knowing she couldn’t wait.

The young serval tapped on the ornate doors, glazed with ground pearls from the western seas, inlaid with precious ocean silver. It seemed deep blue in the fading light of the sunset. She peered in, sighing in secret desire when she saw the wealth and splendor filling the bright, airy chamber. Creamy marble columns and tile quarried from deep caves in the far north; pale emerald and ruby silks from the east; grand furniture carved from the majestic white oaks of the vast southern forests.

Her mistress, a small arctic fox, held up a slender hand to halt the young deer brushing out her fine tail, her pale, silky fur the envy of all who saw her. Light honey eyes graced her with the briefest of glances.

“Send him in, please,” Skyla said, her voice soft and airy.

The maid bowed, partially because it was expected, partially so she wouldn’t have to watch the princess struggle to rise from her sunlit vanity. Whilst having been blessed with an uncommon beauty, Skyla had lived in poor health since birth, and could scarcely leave her rooms. With her marriage to the prince of the north now looming, and with every physician in the kingdom having already tried and failed, her father had had no choice but to call on one from the neighboring land. A mammal known to have cured even the toughest of ailments, provided one could pay his requested price.

The doe set down the polished copper brush and held her lady’s arm, guiding her slowly to the bed, setting her gently on the fine white linen coverlet. The serval pulled the heavy door open, standing aside to make way for a darkly furred sloth bear, dressed in fine, tailored clothes, long, polished claws clasping the handle of a large black bag.

“Thank you, my dear,” he said. “I shall continue to do my best for her majesty.”

“You may go about your normal duties,” Skyla informed them. Even speaking normally was enough to strain her some days. “I will summon you again once we have finished.”

The two girls bowed, speaking ‘highness’ in unison before departing, as they had long since grown accustomed to doing, for Alexander was quite adamant about no one being present while he was with a patient. The king, although wary of such secrecy, allowed the practice, willing to do whatever it took to see his daughter healthy.

“Now then,” he began once the great doors had shut, turning to face the young princess. “Are you ready to begin, my dear?”

Skyla smoothed out her pale yellow shift before laying her hands in her lap.

The doctor chuckled, setting his bag on the vanity stool and unhooking the ornate bronze clasp. He brought out a crystal glass and small decanter of water, drawn from the icy rivers that flowed beyond the city. Pouring out a measured amount, he then took a vial filled with fine white powder from his coat, keeping careful watch of it as it dissolved in the water.

“Here you are, child,” he said kindly, once the mixture was finished. It had been left slightly opaque, with a faintly bittersweet smell, like that of sugared almonds. He added with an almost teasing smile, “Be sure to not miss a drop.”

She giggled, grateful there was a mammal willing to treat her as an equal, instead of someone to be worshiped.

“My father and I are so grateful for all you’ve done,” she told him, before taking a long sip. “I always feel so much better after your treatments.”

She drank the rest, then passed the cup to him, dabbing at her lips with a white lace handkerchief. Alexander held out a hand to help her to her feet, smiling coldly to himself when he saw the glaze spreading across her eyes, the final result he had been waiting for.

“Come, my dear,” he gestured to a grand tapestry, woven through with gilt threads, pulling it aside to uncover the plain door cut into the wall behind it. “I have many things to discuss with you.”

The princess obeyed without a word, following him down a series of stone staircases and tunnels, the final one opening on the bank of the Tessarack River, the city’s central waterway. A small, splendid ship bobbed in the current, tethered to a large tree with thick rope. He led her aboard, ordering his small crew to set sail as he hurried the girl below deck to his grand cabin. It was only when the key clicked in the lock that she began to come to, gazing about as her eyes cleared, her tail waving leisurely as she turned to him with a gleaming smile.

“Are we finally going on that voyage you promised, Father?”

Ocean silver: rare metal mined in the far north, looks various shades of blue depending on how sunlight hits it