Pete reports to the Keepers' Assembly, one year after being given the task to manage Leo and Blaine's universe. Another insight on the many (many, MANY, many!) mechanisms that make this multiverse work.

I love to write about Pete and the way he manages this multiverse. I know I am obsessed, but I really don't care.
In case you were interested, reading The Infernal Device first might help.

The Keepers' Council is not the highest authority on the planet, but it's certainly the scariest. All Master Keepers look very stern and somewhat disappointed, except for one of them at the far end of the table, who looks towards the young apprentices, and especially towards him, with good-natured indulgence. He's a Master Keeper like the others, but he also happens to be Pete's father, so that doesn't really count as support at all. They call his name – his real, twelve letters long name – and he takes a step forward, swallowing hard. As he stands there alone, he can feel the little crowd of his fellow keeper apprentices behind himself. One after the other, all of them will stand where he is now, so they're silent and nervous and scared to death. Pete shares the sentiment.

Pete hasn't been so tense since twelve months ago, which coincidentally is when the Council gave him his charge – the universe he is supposed to take care of for the rest of his life – threw him into it and left him there to fend for himself. In that occasion, he came back after fifteen hours, almost four more than anybody else, having fixed an instance that had a sixty percent probability of becoming doomed. He had passed his first trial with flying colors, now he has to pass another one.

“You have spent the past year studying your tree-universe,” one of the Keepers says. “You should be able to understand its mechanics by now, at least on a basic level.”

“I am, sir,” Pete says. He just hopes the confidence he feels doesn't desert him now.

“Then, let's proceed.” The Keeper leans against the back of his chair and crosses his hands on his lap. “Tell me what's the cycle of the tree-universe you're tending to.”

That's usually a very tricky question for everybody, but especially for him as the internal narrative of his universe – that is the way things go – is absolutely non-linear, so establishing a cycle was not an easy task. A cycle, in the most simplistic of explanations, is a sequence of events that tend to happen, in some form or other, every time an instance is born. Sometimes, but not always, the same cycle can happen again and again inside a single instance too, as in the case of dynasties, where a certain behavior and its consequences are repeated once in every generation.

“I'm dealing with connected-constants with a negative recurrent characteristic,” Pete explains, starting with the structure of his tree-universe. “They are two men destined to be together and they are always born many years apart. The beginning of every cycle is the birth of the younger one, which usually triggers the reset of the variables. After that, there are two major peaks: one is a non-neutral variable that comes to upset an otherwise well-established routine, tipping the instance towards destruction; the other is some form of mental instability occurring to the younger constant.”

“And the end of the cycle?”

“As of today I haven't seen the end of a cycle yet,” Pete explains. “In fact, it's possible that in the course of the next years, I will observe several other major peaks as the story evolves. The tree-universe is very prolific, tho. Several cycles often start at the same time before any other close.”

The man in front of him nods, approvingly. “As it is common in tree-universes like yours,” he says. “They are anomalies that tend to replicate at a much faster rate. You are doing a very good job, young Keeper.”

Later that night, after receiving the entire Council's commendation for his stellar performance, Pete is celebrating with a couple of fellow keepers that he dares to call friends, even if they're being very annoying right now. Some of them start teasing him, as they usually do. “So you have a soulmates universe, uh?” One says, taking a sip of his drink. “It's easy to be commended when all you have to do is pushing one person towards another.”

“It doesn't work exactly like that,” he grumbles, pouting a little. It's very annoying how they think that the only important thing in his universe is that Blaine and Leo are in love. They don't get that that's the starting point, but it doesn't mean it is enough to sustain an instance.

“Well, then explain to us how it works, genius!” Another of his friends says, coming back to the table with two more mugs.

And Pete would love to, but the alarms of his ship set off, signaling some danger in his tree-universe. He must leave at once because, as easy to tend to as his friends think it is, his universe doesn't even leave him time for a beer. 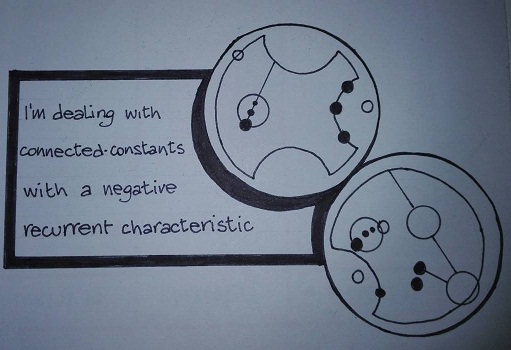