Alundra: Shadow in the Dreamscape

Plagued by nightmares of beasts and flames, haunted by words of a dying wizard, a young adventurer sets foot in Inoa, a village cursed. Dreams turn into nightmares, sleep turns into death... the shadow lurks in the dreamscape. Full novelisation. 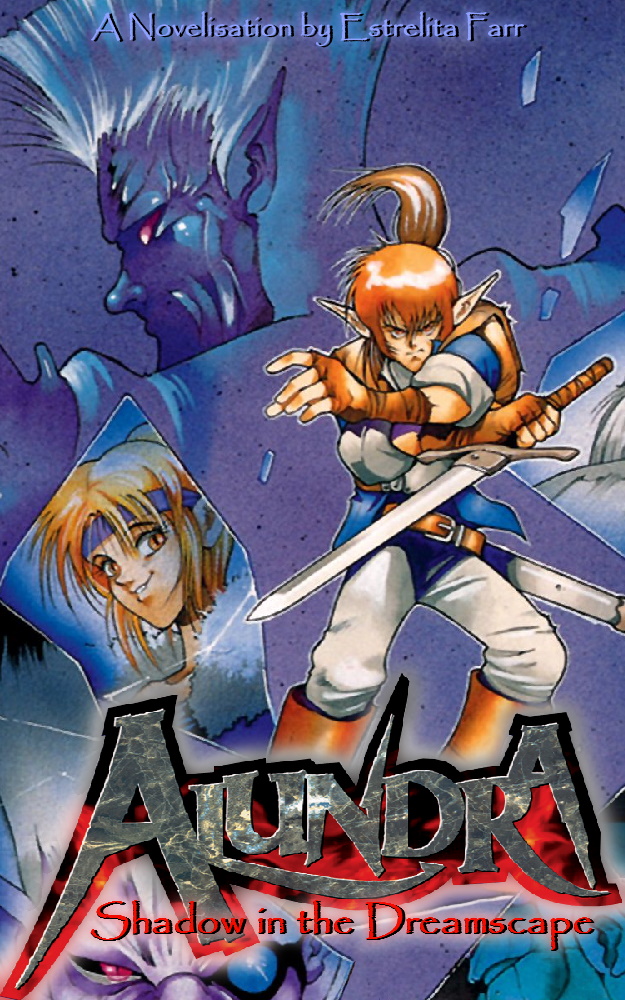 Alundra: Shadow in the Dreamscape

To those who played Alundra:

Nice game, isn’t it? No, really, why would I write a novelisation for this game if I didn’t like it? If you’ve read my other novelisation Breath of Fire III: Of Gods and Dragons, you might be expecting some major storyline alteration, but for Alundra: Shadow in the Dreamscape, I’ll be following the main storyline quite closely. However, you might feel it’s rather different from the game since I did some major changes to each scene, such as the order of minor things (i.e. talk to NPC A / NPC B / NPC C becomes talk to NPC B / C / A, etc), when and which characters are introduced (really, this game introduces too many characters at the beginning), total scene overhaul, extra story padding, etc… but the main storyline stays mainly the same. Still, hopefully I’ll be able to add more emotion to the story!

To those who haven’t played Alundra:

Well, you should, it’s a good action RPG game! I did find some parts of the story with plot holes… but if you don’t mind spoilers (or if you want to read this just for fun), I tend to describe everything as though the reader has never even seen the game before, so no problem there!

To those who have / haven’t played Alundra 2:

Ah, no worries; Alundra 2 is set in an alternate universe (at least I’d think so) and has no relations to Alundra as far as I can see, so there won’t be any spoilers from that game in this novelisation. I like Alundra 2 too, but I like Alundra more!

To every reader in general:

Beware of lengthy chapters; if you’ve read my other novelisation Breath of Fire III: Of Gods and Dragons, you’ll see what I mean. Regardless, I hope you’ll enjoy this story!

Thanks to Diana-HND for feedback on this story while it was in the forge!

Thanks to StrategyWiki (dot) org for being a good reference for the game characters because I couldn’t remember much of them pre-game!

Thanks to L0rdVega on YouTube (dot) com for the full set of Alundra playthrough videos; they help when there aren’t any game scripts available!

Thanks to Renuski on DeviantART for the dreamy fanart of Alundra! It helps with the enthusiasm when the going gets tough. xP

Thanks to Working Designs for this great game!

And thanks to you for reading my story!

Alundra: Shadow in the Dreamscape is written by Estrelita Farr, who does not own anything from the actual game. And a terrible curse shall befall those who try to steal this story. xO

Added 16 Sep 2018: Special foreword for readers of Archive of Our Own!

Hello, AO3 readers! You may not know, but I originally posted this story over at FanFiction (dot) net way back in 2011 when I completed it. And today (16 Sep 2018), I decided to post it here at AO3! Do note I did so without changing any of the writing, except for some spelling and grammatical errors; it's so that I can look back and see how much I've grown as a writer since then. :)

Alundra: Shadow in the Dreamscape is still one of my favourite stories and I still read it every now and then, even though I wrote it myself! Hope you’ll enjoyed reading this story as much as I've enjoyed writing (and re-reading) it. :D