Loki works a part time job at a bakery to get by during college and finds that his boss, Thor, didn't just hire him for the job.

People have asked me a couple of times 'How does Thor look? How big is he?' Of course my descriptions drop a couple of hints that he is definitely a Big Boy. He's taller than he is in the movies (like, really tall, about 2 metres) and his already large frame is very muscular and covered with a layer of fluff and a big belly. How much fluff? That's up to you, the reader. It can be strongman-like or more.

Loki’s fingers nervously tap on his thigh, to the rhythm of ‘Just Like Heaven’ by The Cure. It should calm him down but fails to do so now. His one leg, that is gracefully crossing the other, wiggles in the same rhythm as he peers out of the tram window. He adjusts the volume slightly and pushes his headphones against his head a little tighter, wanting to get submerged into the music.

He tells himself that the job interview he’s heading to, won’t be a big deal anyway. It’s just a simple part time job to help him make ends meet and to not worry about his bank balance at the cash register of the supermarket at the end of the month. Besides that, getting some work experience during college always looks good on a resume.

But he’s nervous nonetheless. He has no idea how these things usually go, having gotten jobs in other ways previously. He’s worked at family members’ companies who could use a pair of extra hands during summertime so he was hired right away back then. And he has done a bit of online modeling work on Patreon, just to top up his pay pal for extra’s like clothing and concert tickets.

‘Thor’s Bakery’ still has a small hand lettered poster on the door. ‘Cashier wanted.’
‘Well, you’ve found him.’ Loki mumbles to himself, gathering his courage, and walking in. His sense of smell is immediately treated with the sweet warm scent of cinnamon and vanilla blended together, with a subtle hint of nutmeg and butter. The soft pastels on the walls and decorum of the shop, immediately make him feel welcome and embraced by warmth and coziness. He takes a deep breath. ‘Okay, don’t fuck this up.’

‘Hi there, you must be the applicant.’ A deep, resonant voice immediately catches Loki’s attention. He startles a little but quickly answers; ‘Hi, yes I am.’ Loki has seen pictures of the ruggedly handsome owner of this bakery on the web site where he applied for the job. It just begins to dawn on him now how huge this man actually is. He’s towering over everybody in the shop. The owner quickly extends his unnaturally large hand and almost mangles Loki’s dainty fingers during the handshake. 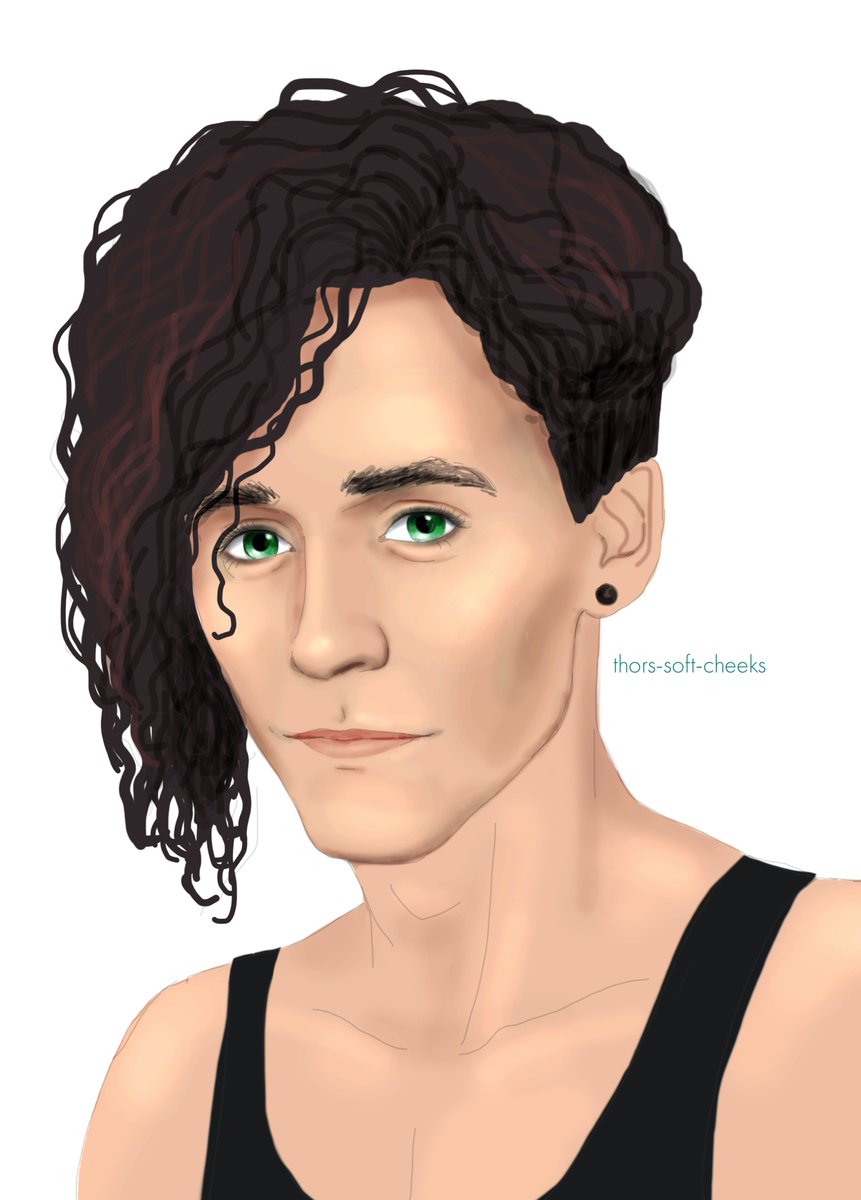 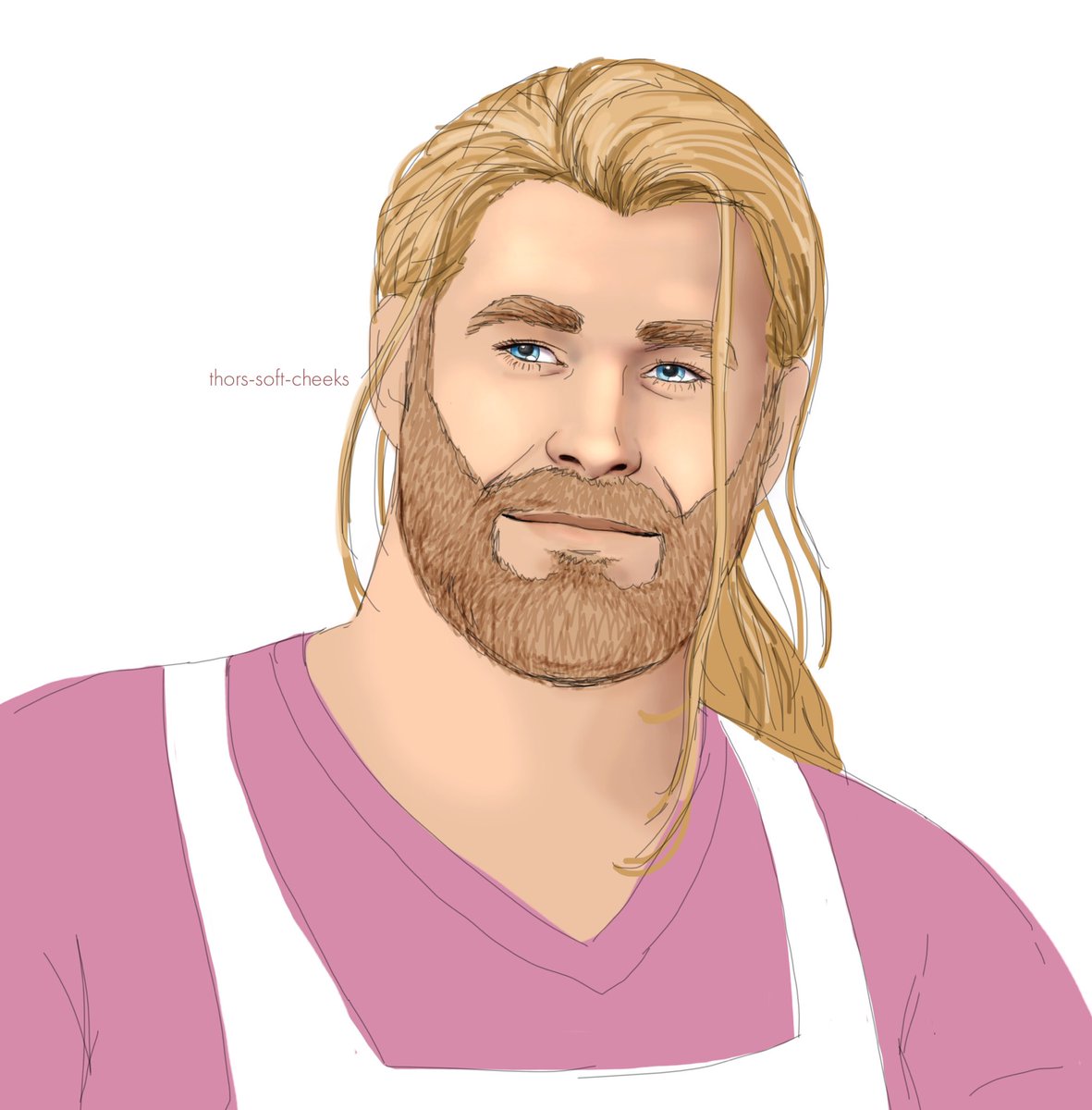 ‘Welcome, I’m Thor.’ He smiles. ‘Loki. Loki Laufeyson.’ Loki answers with his jaws clenched, trying to smile through the pain. That is one hell of a strong grip. Luckily, he gets distracted by Thor’s eyes, which have the most vibrant shade of blue he’s ever seen. Thor hastily undoes his apron, which is covered in flour and bright pink smears of frosting, trying to make himself look a little more presentable. Loki quickly deduces he’s obviously a guy who likes to taste everything he makes and remembers the phrase ‘Don’t trust a skinny chef.’ Thor seems very trustworthy in this case.

‘Come, let me guide you to my office.’ Thor beckons kindly. ‘Coffee? Or are you more of a tea guy?’
‘Coffee is good, thank you.’ Loki says softly.
Thor immediately grabs a cup and pours Loki a good bit of fresh brew. ‘Milk and sugar?’
Loki shakes his head, smiling shyly. ‘Just coffee.’
‘Just coffee.’ Thor repeats with a slanted smile and hands Loki the cup. ‘Here you go. Come on.’

Thor’s office is on top a short but narrow staircase. It is decorated in a similar way as the rest of the bakery, with pastels on the wall and comfortable vintage furniture. Thor’s desk is the centerpiece, but Loki is immediately drawn to the window that offers a full view on the bakery and the tables downstairs. In a short glance, he sees two elderly ladies happily enjoying a freshly delivered high tea, admiring the rich variety of neatly stacked snacks, scones and other traditional finger food they’re about to enjoy. A staff member brings a bowl of water outside for a customer on the terrace with a service dog, and in his other hand he balances a plate with Swedish cinnamon rolls. Two other staff are cleaning up tables, inaudibly laughing and talking to each other. Another customer is sitting behind his lap top, sipping on a large latte, accompanied by a half-eaten carrot cake and smiling with every sip.

‘Nice view, isn’t it?’ Thor laughs. ‘It’s good to keep an eye on things when I can’t be on the floor. What do you see?’
Loki hesitates for a minute. Would this be one of those trick questions that employers sometimes ask applicants to test their personality type?
‘I see… happy people. Those two customers are happy with their orders. The dog outside is happy too because he got tended to, as is his owner who just took a bite of a cinnamon roll. The two cleaners are now dancing to the song on the radio. The guy in the corner enjoys his morning coffee while he’s using your free wifi.’

Thor hums contently. ‘Very good. You’re perceptive. It’s important here to keep your eyes open. To see the work that needs to be done and do it. To keep that happiness, you mentioned in here. I’ll be frank with you: It’s not just going to be cashier work, you may also have to help out on other tasks when it’s busy or when your colleagues simply need a hand. I do the same. I may be the owner here, but I’m mostly down there, where the work is.’

‘I see.’ Loki answers softly. He is in awe of everything he sees right now. But most of all by Thor. Thor is likely in his mid-thirties, at least that’s how Loki estimates him. Mature but still having that fresh, youthful streak. His long hair tied in a messy bun, thick and sun kissed. He fills up his work shirt, maybe a little too much for the shirt’s liking but definitely not to Loki. Loki tries his best not to stare but also not to be impolite and look the other way too much.

Thor beckons him to sit down on the comfortable chair opposite to himself. Loki carefully sips on his hot coffee, gazing at the big plate of donuts on Thor’s desk. There probably were more earlier, judging by the size of the plate compared the number of leftover donuts and numerous crumbs on the desk.

‘Did you get here by tram?’ Thor asks, trying to relieve the tension. Loki nods. ‘Yes, I live in a student flat near school so it’s about 30 minutes away.’
‘Oh, that’s good. Not too far off. Let’s see: I have your resume here, of course. Says you’re a literature student. What brings you to doing cashier work at this bakery?’
‘I could use any kind of work experience.’ Loki answers quickly, having sort of expected that kind of question. He sees Thor take a short note before looking up at him again. Damn, those eyes seem to look right through his soul.

Thor grabs one of the donuts and immediately takes a big bite out of it. ‘You want one? They’re yesterdays but still amazing.’ Thor adds. Loki kindly refuses. He is too nervous to eat.

‘This company has grown exceptionally in the past four years.’ Thor says, one cheek obviously full of donut. ‘Beyond my expectation, really. It may continue to grow a little more so it is possible for you to also get another position while you’re here. Would you be interested in a career in food and service?’ He swallows and quickly takes another bite. Half the donut is already gone now. Thor quickly clears his throat.

Loki tries not to look too amazed. He’s never been a guy with a big appetite himself and it shows. His clothes fit loosely around his lithe frame, he always needs to wear belts to make sure his pants don’t slide down his butt too much. Food is just not an important thing to him. And here he is, applying for a job in a damn cake shop. Loki’s eyes gaze down from Thor’s lips, down to the swell of his chest, his muscular arms and his hands. Loki notices Thor’s hands fidgeting and clenching the donut a bit before he hastily takes another bite, it’s almost like he’s nervous himself too.

‘I think I could be interested in a career like that.’ Loki tries to answer with confidence. But in all honesty, he hasn’t the foggiest. He just needs a job now and he’ll just see what life has to offer for the future.

‘You’re not sure?’ Thor asks, a little audible disappointment in his voice. The donut is gone.
Loki curses to himself but recomposes right away: ‘I must say it sounds interesting, but we both know it is not in line with what I study for.’ He says quickly.

‘That is true.’ Thor hums, wiping the crumbs from his short beard, still sounding slightly disappointed. ‘I’ll give you the benefit of the doubt though, because we are really short staffed and you look like a guy who takes things seriously. How does a six-month trial period sound? Paid of course. And if you’re happy and I’m happy, we can change it into a year and so on. No further strings attached, yes?’

‘You mean I’m hired?’ Loki asks, a little swept off his feet.
‘Yes. For six months, that’s what I can offer you now.’ Thor answers, looking like he wipes his hands on his thighs. He inhales sharply and clears his throat again. ‘After six months, we’ll see if we can extend your contract.’

‘That sounds very good!’ Loki exclaims. And it honestly does. He can at least get paid for six months, that sounds good enough for now. ‘Thank you very much, sir.’
‘Just call me Thor. We’re a horizontal organization, more like a family, so you can cut the formalities.’
‘All right.’ Loki giggles, all happy and elated. ‘When can I start?’