all the pain of yesterday: first time

Chris rolled his eyes and reached into the basket, expecting to find a tube of lube. His fingers closed on a paperback. He pulled out the book and frowned at the cover. “Did you grab your sister’s trashy romance novel by mistake?”

This is a pre-story scene for my fic all the pain of yesterday.

Written for the smut/NSFW prompt at Chris Argent Appreciation Week on Tumblr. I'm also using this to fill the First Time/Last Time square on my card for Round 11 of Trope Bingo on DW.

Reusing this illustration from my awesome artist yesterday on ao3/corrosivity on Tumblr because it fits this story very well. *g* 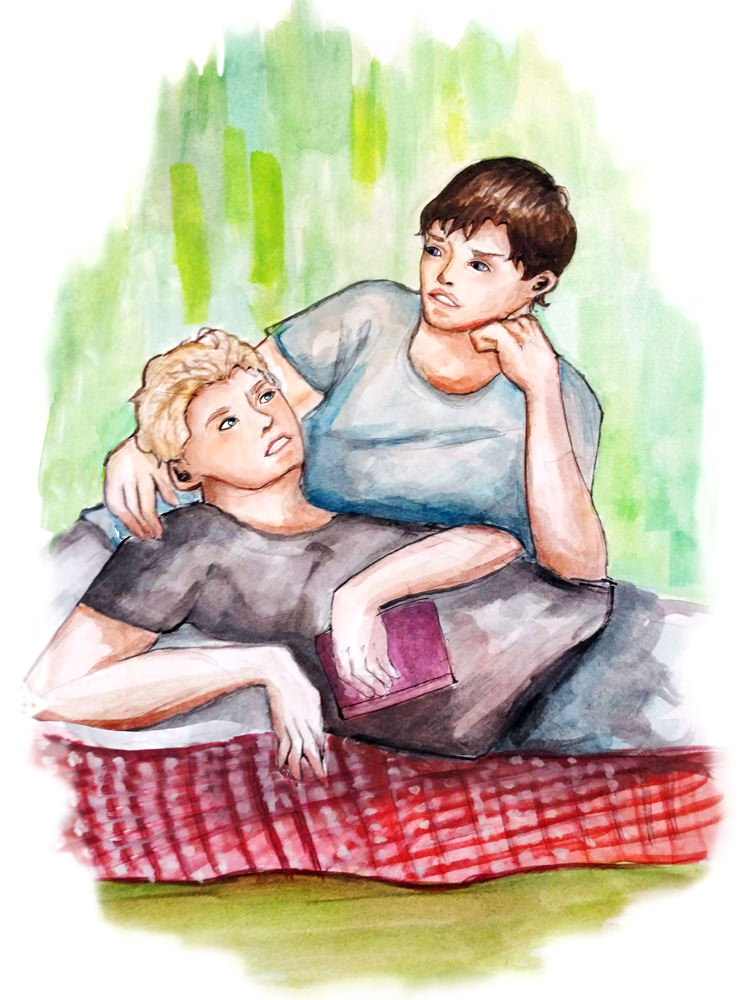 Chris reached into the bottom of the picnic basket and pulled out a paperback with a picture of a wolf on the cover. He was immediately thrown back to the first book he and Peter had read together.

Chris shook out the blanket and they both took hold of an edge to spread it out on the ground. Peter set out the food he’d brought – sandwiches from the deli and homemade cookies he’d snuck out of the house. They talked while they ate (about final exams and sisters and what they were going to do over the upcoming summer vacation), and shared kisses that tasted of pastrami and chocolate.

Peter pulled back and said, “There’s something else in the basket.”

Chris rolled his eyes and reached into the basket, expecting to find a tube of lube. His fingers closed on a paperback. He pulled out the book and frowned at the cover. “Did you grab your sister’s trashy romance novel by mistake?”

Chris flipped through the book noting that some of the pages had been dog-eared at the corners, and that sections of type had been starred and underlined. Chris read one of the underlined bits and blushed. Peter let out a delighted laugh.

“What are we supposed to do with this?” Chris said, ignoring his reaction and Peter’s response to it.

Peter snatched the book out of Chris’ hand. He opened it to a random page and started reading. Even though the scene Peter narrated was between a man and a woman, the sound of Peter’s voice, low and sexy as he detailed what the two were doing, got to Chris. Peter glanced at Chris over the top of the book when Chris squirmed. He gave Chris a knowing look and continued to read.

Chris didn’t want Peter to know how much the situation was affecting him, but there was no way his scent wasn’t giving him away. Besides, that was the point, wasn’t it? Chris looked more closely at Peter. His skin was flushed, whether from the scene or due to Chris’ own response. Chris moved closer and set his hand on the inside of Peter’s leg, just above his knee. Peter stopped reading and raised an enquiring eyebrow.

“Keep going,” Chris said, sliding his hand up the inside of Peter’s leg the slightest bit.

Chris moved his hand upward and catalogued each hitch in Peter’s breathing, each time he needed to clear his throat before continuing to read as Chris’ hand got closer to the bulge in Peter’s jeans. Peter struggled with the words when Chris’ hand brushed over him.

Chris pushed Peter down onto the blanket and said, “Don’t stop,” as he unbuttoned and unzipped Peter’s jeans.

Chris got on his knees between Peter’s legs and drew him out of his boxers. He took Peter into his mouth and sucked the head. Chris slid his mouth down over Peter and slowly brought him to full hardness. He pulled his mouth off Peter each time the words stuttered to a halt.

Chris worked his tongue around the head as he jacked the base, then found the lube in Peter’s pocket. He teased Peter’s hole before pressing in with one finger, then two. Chris stayed away from Peter’s prostate until Peter smacked him on the head with the book. Chris chuckled around Peter, which got a satisfying reaction, and then rubbed the tips of his fingers over the spongy nub until Peter’s body was trembling with it. Chris sat up and withdrew his fingers.

Peter’s eyelids opened slowly and he sounded drunk when he said, “Why’d you stop?”

“You stopped reading.” Chris blew his breath over Peter’s cock and twitching hole.

“You’re an asshole,” Peter said, but there wasn’t any heat in it.

“I learned from the best.” Chris rubbed his fingers around Peter’s hole, but Peter stopped him before he could press in again.

Peter gasped, and again when Chris renewed the pressure. “You’re such a fucking dick.” Peter pressed down in an attempt to get more of Chris’ fingers inside him even though he’d been the one to stop Chris from doing just that.

Chris took his hand away and just looked at Peter.

“I want to come with you inside me,” Peter said, in a petulant rush of words.

Chris leaned over Peter and kissed him. “Was that so hard to say?”

“Fuck you,” Peter said, and swept his tongue into Chris’ mouth.

“I thought you wanted me to fuck you,” Chris said when they separated to breathe.

“You’re not as funny as you think you are,” Peter said.

They helped each other get undressed, but it was slow going because Peter started with Chris’ zipper while Chris attempted to get Peter’s boots off and nearly derailed the whole thing because Chris was a lot closer to coming than he’d realized.

Chris barely got his jeans down his thighs before Peter was lubing him up and rolling the condom down his cock. Peter added more lube, then laid back and raised his legs over Chris’ shoulders.

Chris wanted to tease Peter about being so eager, but the tip of his cock brushed against Peter’s hole and Chris lost his train of thought in the zing of pleasure. Chris pushed until the head of his cock popped through the tight ring of muscle.

Peter keened and said, “Come on, Christopher, come on!”

Chris pressed until his entire length was buried inside Peter. He paused, more so he could catch his own breath than for any consideration for Peter. No matter how many fingers Chris used, or how long he played with Peter’s ass, he was always so tight. Sliding inside him was like taking a trip to heaven.

“You move,” Chris said, his voice tight as he fought back the urge to thrust wildly until he came.

Before Chris realized what was happening Peter had pushed Chris onto his back and was straddling him. Peter stared into Chris’ eyes as he grabbed Chris’ cock at the base and lowered himself until Chris was once more fully seated inside him. Peter wiggled as if he was trying to find a comfortable spot, and Chris groaned.

Peter gave Chris a self-satisfied smirk and lifted himself up. Peter dropped back down and Chris let out a wail. His fingers dug into Peter’s thighs as Peter raised up and down, riding Chris’ cock like a cowboy.

Chris’ laugh was strangled, lost in the sensation of Peter’s ass gripping his cock. There was a stick digging into his back, but Chris didn’t care. There was no way he could stop Peter long enough to get it out.

Peter made a sound as he stroked himself and a moment later he shot ribbons of come all over Chris’ chest and belly. Peter sagged a little bit, his body shuddering from the after effects of his orgasm. Chris pulled Peter down and kissed him. He moved his hips, pushed up into Peter a few more times until Peter squeezed tight around him.

Chris arched, his head going back as he emptied himself inside Peter. Chris came back to himself moments later with Peter’s nose against his throat and Peter’s hand moving in soothing circles against his side. Chris turned his head and Peter slotted their mouths together, and Chris allowed himself to pretend that they had forever.

The next time Peter produced a book, there were two men on the cover.

“Where’d you get this?” Chris said, already opening it as his stomach flipped, wondering if there were the same kind of scenes in this one as there had been in the other.

“I have my sources,” Peter said.

The pages of this book were also dog-eared, and certain scenes starred and underlined. “It looks like someone marked the good bits.” When Peter didn’t say anything Chris looked at him. “You?”

Peter shrugged in a failed attempt at casual. “Someone had to. If it helps,” he said, giving Chris a look, “I thought of you when I read it.”

Chris imagined Peter touching himself as he read the book. He hastily handed the book to Peter, but Peter pushed Chris’ hand back.

“You read this time.”

Chris swallowed hard and fanned the pages. “Where should I start?”

Peter reached down and squeezed himself through his jeans, and Chris could see that his cock was already getting hard in anticipation. “Anywhere,” Peter said, breathless.

Chris opened the book, chose a starred scene at random, and began to read.